The turnout for yellow vest protests in Paris was thin following May Day marches earlier this week. But a letter penned by well-known members of the French world of culture showed support in the hundreds. 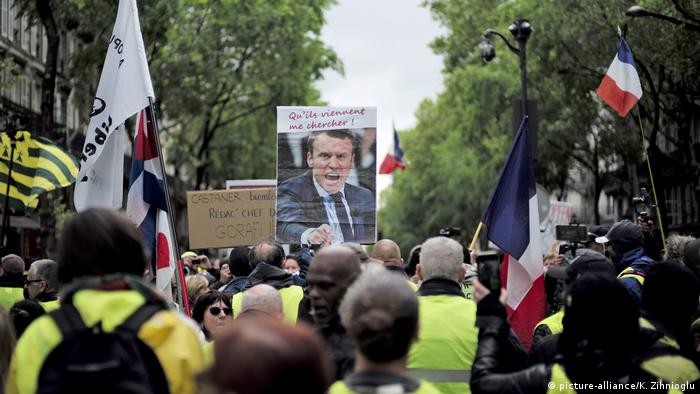 Anti-government yellow vest protesters on Saturday marched in cities across France for the 25th straight week.

Following the annual May Day march attended by thousands on Wednesday, the crowds at the yellow vest protests in Paris were lighter than on previous weekends.

Some 18,900 protesters took part in marches across the country, the Interior Ministry said. Of these, 1,460 were in Paris.

"Many of them were shocked by the behavior and repression of last Wednesday," Herve, one protester, told news agency Reuters. "So it's not surprising to see that it's lagging behind a bit regarding the turnout."

Demonstrations were also held in cities around France, including Nice and Marseille, the Alpine town of Chambery and in Lyon, where ecologists and yellow vest protesters joined forces.

Broadcaster BFMTV reported minor clashes between protesters and police in Lyon. Police also fired tear gas in La Roche-sur-Yon, where protests in the town centre had been banned, FranceInfo reported.

'We are not fooled'

The latest demonstrations came as a group of more than 50 actors, writers, musicians and filmmakers, including actress Juliette Binoche, published a letter on the website of French newspaper Liberation in support of the yellow vest movement.

Titled "Yellow vests: we are not fooled!" the letter said the group could the see the government's efforts to discredit the yellow vest protesters and their attempts to make them out to be "anti-ecologists, extremists, racists, thieves."

"This tactic does not work, this story does not match reality, even if the mainstream media and government spokesmen would like us to believe it," they wrote. "Like the violence they highlight every Saturday, yet the most alarming violence is not there."

"The toll of repression is getting worse every week," the letter went on to say, adding that as of April 19, there had been one death, 248 head injuries, 23 severe eye injuries and five hands badly injured among the demonstrators.

"How can we still exercise our right to demonstrate in the face of such repression?" they asked.

"We are not fooled! The most threatening violence is economic and social. It is the one of this government that defends the interests of a few at the expense of all," the letter continued.

The yellow vest movement emerged in mid-November to protest fuel tax increases and then evolved to oppose policies of President Emmanuel Macron that it sees as favoring the rich.

But many in the grassroots movement, which does not have a formal leader or structure, have said Macron's proposals did not go far enough and lacked details.

Three lists of yellow vest candidates are running in the elections for France's representatives to the European Union parliament later in May.

French intellectuals agree on the fact that the "yellow vest" protest movement is a symptom of society's fractures, but interpretations are divided: Is it utopian direct democracy or a dangerous populist drift? (11.12.2018)