France's 'great debate' is over — so what comes next?

Emmanuel Macron's initiative led to thousands of town hall meetings, and boosted the president’s ratings. But what comes after the "great debate" — aimed as a response to months of yellow vest protests — is less certain. 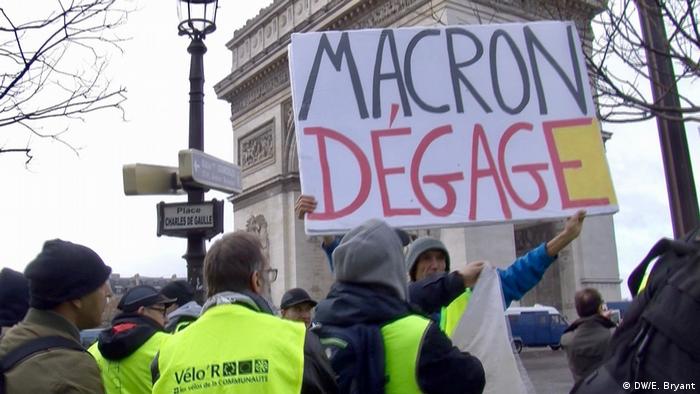 France wrapped up two months of citizen debates Friday aimed as an immediate salve to the ongoing "yellow vest" demonstrations. But the biggest challenge lies ahead, analysts say: finding concrete solutions to a raft of long-held public grievances that go well beyond the protest movement.

For President Emmanuel Macron, who launched the "great debate" mid-January, the immediate takeaways have been largely positive. Up to half-a-million French people participated in 10,000 meetings nationwide to discuss preset topics, from taxes and pubic services to democracy and the environment. Organizers also received more than 1.4 million online public comments, outlining other issues of concern, including jobs and immigration.

Just as importantly, Macron has seen a significant bounce in once-dismal poll ratings, even as public support for the yellow vests continues to erode. His approval rating jumped eight points by early March, to reach 28 percent. But how the crisis plays out for both sides in the coming months remains a big unknown.

"The problems start now" analyst Jean Petaux of Sciences-Po Bordeaux University told DW. "To totally finish with the yellow vests, the government has to address at least part of their demands, which are very disparate. And give the sense it is offering credible solutions."

So far, the French president has given little indication of his long-term exit strategy. Some believe he doesn't yet have one. One option— a referendum — is problematic both in terms of timing and the risk it may be rejected.

For the moment, Macron and his government have some breathing space, as they launch "phase two" of the debate that continues into April. The town-hall style meetings are over. Instead, roughly one hundred citizens will be tapped to help in the herculean taskof helping to sift through and analyze the findings. The process is already hitting resistance at the idea of randomly selecting those who will participate.

Surveys show the majority of French have broadly given the national debates a thumbs up. More than eight in 10 respondents said the meetings gave citizens an opportunity to express themselves, while smaller majorities said they addressed their personal problems and those aired by the yellow vests, according to a Harris Interactive-Agence Epoka poll published this week, echoing others.

But many appear skeptical that all the talking will amount to much. Another survey found roughly two-thirds doubt the government will ultimately take the myriad concerns aired in the public meetings into account.

"The idea we have to do things differently is obvious," Territorial Collectives Minister Sebastien Lecornu, who helped to organizing the debates, told the weekly Le Journal du Dimanche. "We may beef up certain themes, accelerate or correct others. With humility."

For the moment, the yellow vests have put the brakes on Macron's reformist agenda. Named after the fluorescent jackets French keep in their cars, the protest movement has morphed well beyond its initial opposition to a planned fuel tax hike, to embrace a hodgepodge of grievances of a largely rural and working-class France that feels left behind.

The French president took an initial step back by repealing the tax increase. Then in December, he went further, announcing €10 billion ($11.3 billion) of aid for the most vulnerable and laying out plans the debates. Yellow vests dismissed the announcements as insufficient, the most extreme calling for Macron's resignation.

"Emmanuel Macron now has to show that his statements — that there is a before and an after the yellow vests — are translated into acts," said analyst Petaux. "Otherwise, it's just talk."

So far, there are at least stylistic changes. Often dismissed as arrogant and aloof, Macron has rolled up his sleeves — literally — and participated in roughly a dozen public debates, in a style reminiscent of his presidential campaign.

Political opponents grumble the French leader has hogged media coverage ahead of May's European Parliament elections. And indeed, polls show his Republic on the March party inching up to overtake the far-right opposition National Rally.

Still, some observers note the debates ultimately involved only a small slice of the population — including many elderly, with time on their hands. "The great majority of French stayed home," said Petaux. "It's not that they were sidelined. It's that they don't care. They have other things to do."

But Bernard Reber, who studies participative citizenship at the Paris-based National Center for Scientific Research, said the debates should not be underestimated. "It's been unprecedented in every sense," Reber, who attended roughly 30 of the meetings, told DW.

A few months ago, he said, many would have dismissed the idea that French would show up and hash out often deeply divisive issues. "But that's not been the case," he added. "People mobilized — and stayed for a long time. I don't know many countries in the world that allow citizens to participate in hours-long debates."

Macron is expected to announce the after-debate roadmap next month. "I'm not sure the government has a clear idea of what it's going to do with this mass of information," Reber said. "But they have all kinds of options."

A referendum may be the most obvious path. But it raises a set of questions, analysts say, including whether to pair it with the European elections. Moreover, the French may vote down the proposals it lays out, amounting to a serious setback for Macron's government.

Still the great debate has already delivering lessons. "People are learning that politics and how to change a system is a very difficult process," Reber said.

The next steps for the yellow vests are also unclear. A number of analysts believe the movement will slowly die out.

Some diehards will likely continue and harden the protests, Petaux believes, while another group will be absorbed into existing politics parties — mostly on the far right and far left.

A third "will relive the nostalgia of the Republic of roundabouts," he said, remembering the solidarity and friendships struck during the protests.

'Yellow vest' leader turns her back on the movement