As President Macron's approval bounces back, yellow vest protesters hope to convert notoriety into electoral success. The movement has brought hundreds of thousands of people out into the streets across France.

At least one demonstrator was injured as France's yellow vest protests entered their 13th week on Saturday. At least 10 protesters were arrested after scuffles broke out with police near the Palais Bourbon, where the National Assembly meets.

While many demonstrators marched peacefully, some masked activists tried to break down barriers outside the parliament. Others threw projectiles at police, who responded with tear gas and stun grenades to disperse crowds.

The protests have brought hundreds of thousands of people out onto the streets all over France. Initially voicing opposition to President Emmanuel Macron's planned tax hikes on fuel, protesters temporarily suspended action on roads, businesses and even the government. Scores of people have been injured and hundreds arrested since the protests began in November.

Police could not confirm French media reports that the man's hand was blown up by a grenade fired from a police defensive ball launcher (LBD), a controversial new generation rubber-bullet rifle whose use in Europe has been banned in Austria, Ireland, Finland, Norway, Sweden, Denmark and the UK. Only Greece, Poland and Spain (outside of Catalonia) allow their use.

"I've seen, several times, LBD shots into crowds and then you see people falling to the ground, with leg injuries or sometimes eye injuries, there can be a lot of bleeding. It's quite shocking. We're not used to seeing this sort of thing at demonstrations," Clement Lanot, a photo-journalist who has been following the protests on the ground, told DW.

Read more: Can Macron and the yellow vests cooperate?

Thousands of protesters also turned out in the French cities of Marseille and Montpellier, as well as in Bordeaux, Toulouse, and several cities in France's north and west.

Interior Ministry figures released at 2 p.m. local time put the turnout across France at 12,100 people, 4,000 of whom marched in Paris, down on the previous week's figures. 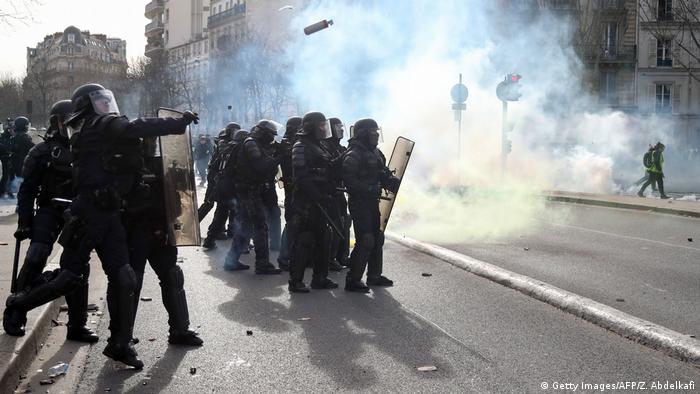 Protests took place in Paris as well as other French cities

The demonstrations appeared to be losing steam as Macron acquiesced to some demands and has embarked on a nationwide town hall tour to learn more about people's grievances. Recent polls have suggested that his approval rating is back on the rise.

At the same time, some yellow vest participants have been looking to capitalize on the movement's momentum and turn it into electoral success, which could prove tricky as they are very loosely organized and have no specific leadership.

To that end, some yellow vest demonstrators met with Italy's populist Deputy Prime Minister Luigi Di Maio, who said he offered them advice on turning a citizen's movement into a political party. The meeting touched off a row between France and Italy, marking a low point in relations between the two founding EU nations. On Friday, Di Maio refused to apologize and accused Macron of playing "political games."

Attacks on reporters by France's so-called yellow vest protesters are an expression of long-simmering anger. They want the media to change, while journalists say the demonstrators also need to do some soul-searching. (26.01.2019)