Thousands of people wearing red scarves have marched through Paris to denounce rioting and vandalism during recent "yellow vest" protests. The anti-government movement has grown since its first rally 11 weeks ago. 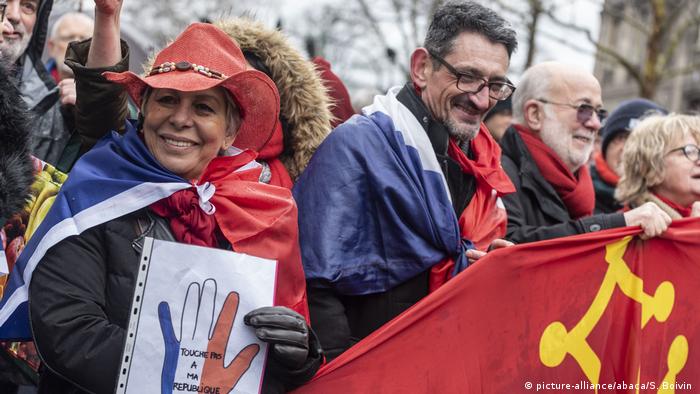 More than 10,000 counterdemonstrators gathered in the French capital on Sunday to condemn acts of violence by members of the "yellow vest" movement.

Weekly yellow vest protests have been taking place across France since November, drawing tens of thousands of people unhappy with President Emmanuel Macron's government. While the rallies have mostly been peaceful, they have occasionally resulted in vandalism, street fires and clashes with riot police. 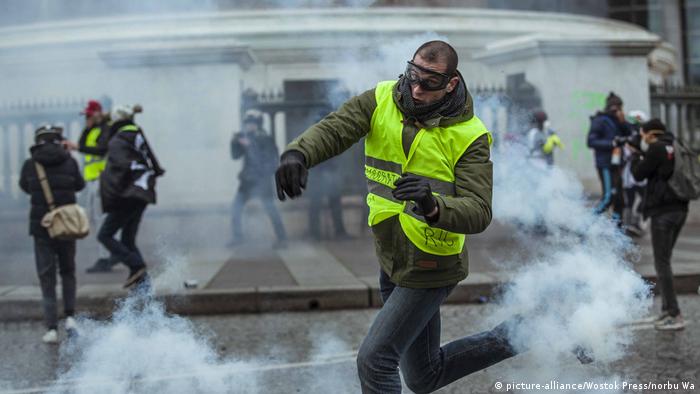 Sunday's rival demonstration advanced peacefully in the rain through eastern Paris to the Bastille monument. Many in the crowd wore red scarves and brandished signs with slogans like "Stop the violence" and "Hands off my Republic."

A nursing manager who gave her name as Marie-Line told the Agence France-Presse news agency she believed the yellow vests had just cause to "grumble," but she came "to say that this verbal and physical violence must stop."

"We don't share all the demands expressed by the yellow vest movement, for instance demands about overthrowing the government, brutalizing institutions," said Laurent Segnis, a member of Macron's centrist Republic on the Move party, speaking with The Associated Press.

Around 2,000 people have been injured in 11 weeks of yellow vest marches, while 10 have died in road incidents related to protest blockades.

The yellow vest movement, named after the fluorescent jackets French motorists are required to have in their cars in case of an emergency, initially formed to protest against fuel tax hikes. But it has since come to represent wider discontent with Macron's policies, which many see as favoring the rich.

In an effort to quell the unrest, Macron has offered concessions and launched a series of public debates to allow people to voice their frustrations.

The latest yellow vest protest on Saturday was attended by some 69,000 people nationwide, a lower turnout than in previous weeks, according to the French Interior Ministry. About 4,000 were in Paris, where protesters clashed with police.

Prominent activist Jerome Rodrigues was injured in the confrontation. Rodrigues said he was hit in the eye by a police rubber bullet, an anti-riot weapon that has become highly controversial in France. Police, who were wearing body cameras for the first time on Saturday, said they were investigating the incident.

After hailing Trump as "one of the best American presidents" ever, France's controversial author is back with a new novel, Serotonin, which combines pornography and prescient depictions of the "yellow vest" protests. (08.01.2019)

Macron responds to 'yellow vests' with call for national 'debate'

France: Minister under pressure to resign over LGBTQ comments 17.07.2022

Caroline Cayeux is facing heavy criticism over her comments about homosexuality. More than 100 public figures have signed an appeal questioning why she's still in government.