The French president encouraged people to list their grievances and propose changes to the nation's economy during a "great debate." The tour is aimed at quelling the "yellow vest" movement. 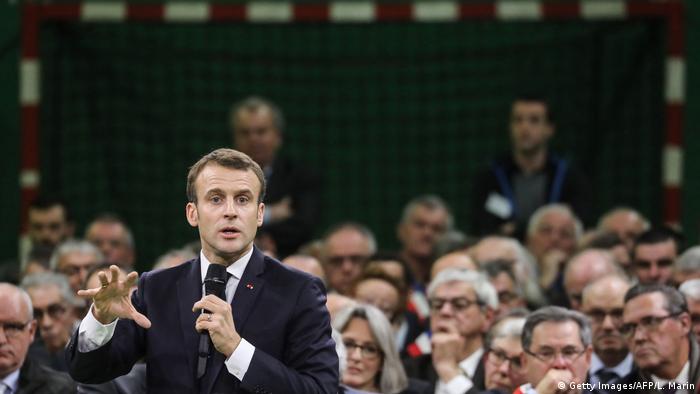 French President Emmanuel Macron met with about 600 mayors across the Normandy region on Tuesday in his first session of a two-month national debate tour he promised in response to the country's "yellow vest" movement.

In his opening remarks to the gathering in the northern town of Grand Bourgtheroulde, Macron said he was there to hear the concerns of the French and promised that the questions raised by the citizens would be given consideration.

"There can be no taboos," he said, acknowledging that France was going through "a social fracture that we have talked about for 25 years."

France has seen tens of thousands take to the streets in Paris and other cities on a weekly basis wearing the yellow high-visibility vests found in French vehicles. What started as protests against a fuel tax hikes, which Macron has since suspended, has evolved into anti-government demonstrations which have led to clashes with police in many cases.

On Sunday, Macron set out a framework for a "grand national debate" in a six-page letter to the public, where he said he hoped "as many people" as possible would participate in town-hall-style discussions.

Macron's town hall discussions are expected to center around four major themes that have emerged from the "yellow vest" protests:

"We won't agree on everything, that's normal, that's democracy. But at least we'll show we are a people who are not afraid to talk, exchange and debate," Macron's letter read.

Many village and small-town mayors have opened "cahiers de doleance" (loosely translates to "books of complaints") in their town halls in response to the yellow vest movements.

Vincent Martin, the mayor of Grand Bougtheroulde, told the president on Tuesday that transport and the cost of living were "recurrent themes" in the complaints, adding that local people had "a lot of expectation."

"We feel isolated and yet we're only 160 kilometers (100 miles) from Paris," said Mayor Jean-Noel Montier of Mensil-en-Ouche, a collection of several small remote villages.

Macron's meeting with the mayors lasted about three hours and was broadcast live across French television.

Around 100 "yellow vest" protesters gathered outside the venue, a sports hall in the town, to express their discontent with the French president, some of whom shouted "Macron resign." Police used tear gas to disperse the group and a few people were arrested. 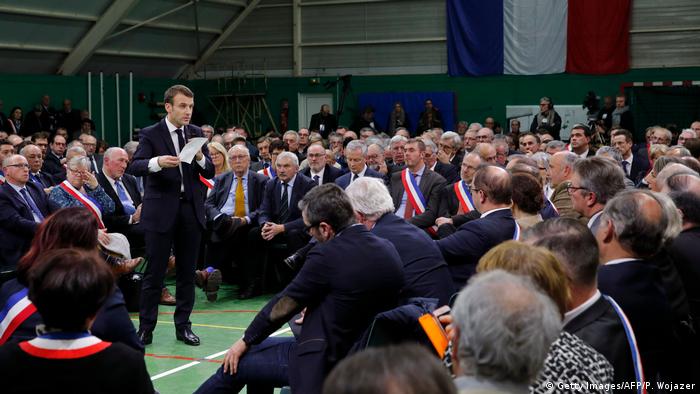 'Screwing' with the system

Before his town hall in Grand Bougtheroulde, Macron made a surprise visit to a local officials' meeting in the small town of Gasny, located near the Seine river about 70 kilometers west of Paris.

In the meeting, some expressed concerns over the loss of purchasing power of retirees and civil servants. Macron responded by suggesting some poor people were "screwing" with the system.

"For people who are struggling, we will make them more aware of their responsibilities, because some of them are behaving properly, while others are messing around," Macron said.

The outspoken president had previously made comments perceived by many French as arrogant, including when he told an unemployed man to "cross the street" to find a job or when he suggested some French workers are "lazy."

In Grand Bourgtheroulde, one mayor asked if he regretted some of his remarks in the past, to which Macron replied: "That's how I am. I'm not going to change."

Authorities fired tear gas and water cannons in Paris during scuffles between police and protesters. President Emmanuel Macron's plans for a three-month public debate have done little to assuage anger. (12.01.2019)