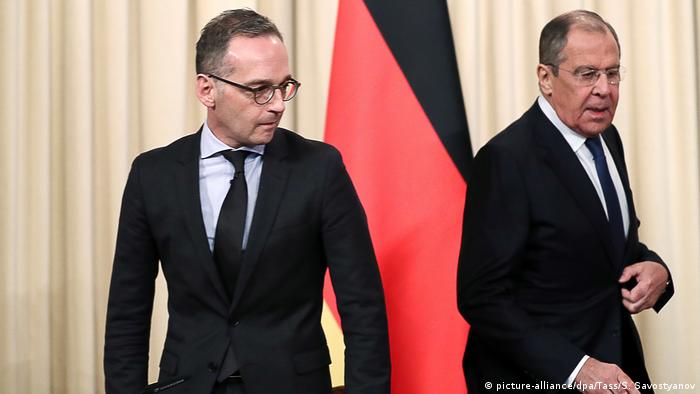 The two diplomats talked behind closed doors for an hour, according to DW Moscow correspondent Emily Sherwin.

"When President Trump announced he would exit the deal in October, our American colleagues in the area of arms control declared that this decision was final and irreversible and that it was 'not an invitation to dialogue,'" Lavrov said.

After the meeting, Maas tweeted, "the INF treaty is no longer adequate. We have to get arms control back on the international agenda."

The 1987 INF accord eliminated nuclear and conventional missiles deployed by the US and the Soviet Union in Europe. Last year, Washington pledged to withdraw from it if Russia did not modify its weapon systems by February 2, 2019.

US says the 'clock is ticking'

Ahead of Friday's meeting, Maas told the Interfax news agency that Russia could save the INF if it got rid of its 9M729 cruise missile, which the US claims violates the accord. At the press conference, however, Lavrov said that the missile issue was "merely an excuse to leave the deal."

Maas responded that the deal could still be salvaged and urged Russia to eliminate the disputed missile, but also said that the Cold War-era accords were not "sufficient" for controlling modern arms such as cyber threats and autonomous weapons systems on a global level.

"We want all of these tendencies, all of these developments to become the subject of a new architecture of weapons control," Maas said. "This is why we will hold a conference in Berlin, as early as March, which would be focused on these topics."

Earlier on Friday, US representative Andrea Thompson rejected the claims that the US was already determined to leave the INF.

"These claims have nothing to do with reality," she told the Kommersant paper. "We have given Russia 60 days and the clock keeps on ticking."

Europe, not US to decide on 'European energy policy'

Commenting on Washington's anger over the Nord Stream 2 pipeline between Russia and Germany, Maas said that "questions of European energy policy must be decided in Europe, not in the US."

"To impose unilateral sanctions against Nord Stream 2 is certainly not the way to go," Maas said.

On the topic of Ukraine, Lavrov said there was "no doubt" the Kerch Strait incident — in which Russia captured three Ukrainian ships and arrested 24 sailors off the coast of Crimea on November 25, 2018 — was staged by Kyiv to ratchet up tensions ahead of Ukraine's March presidential elections, and that Berlin and Paris were aware of that.

"But, seeing how they have decided long ago that they would support Kyiv in pretty much everything it does, there is not much we can do about it."

Maas restated calls for Russia to release the 24 sailors.

The foreign minister also said that Germany and France had offered to monitor the stretch of water to enable ships' movement. Lavrov, meanwhile, said that Russia had agreed to this a month ago, but that observers were not yet in place.

'All sides must contribute to de-escalation'

After his meeting with Lavrov, Maas traveled to Kyiv for talks with his Ukrainian counterpart, Pavlo Klimkin. After acknowledging Germany's disappointment at the lack of progress in relations between Russia and Ukraine, Maas said, "All sides must contribute to the de-escalation of the conflicts."

Maas also made clear that Russia "must permanently ensure freedom of passage" in the Kerch Strait, as well as confirming Lavrov's pledge that Russia would continue delivering gas through Ukraine despite work on the Nord Stream 2 pipeline in the Baltic Sea.