Ukrainian President Volodymyr Zelenskiy has talked about the prospect of peace in eastern Ukraine with Vladimir Putin. The Russian leader said he was open to restarting negotiations under an international framework. 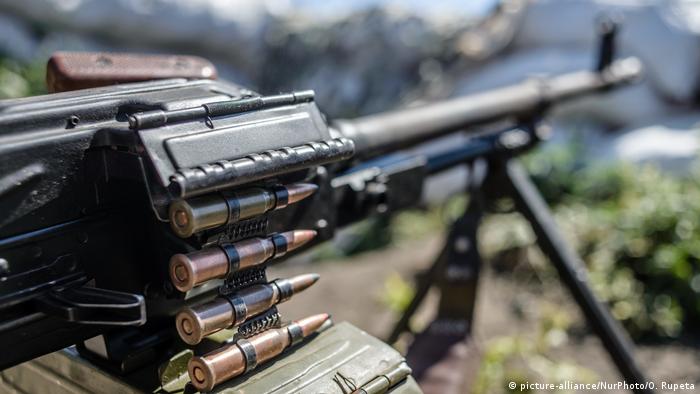 The Kremlin on Thursday said Russian President Vladimir Putin and his Ukrainian counterpart, Volodymyr Zelenskiy, discussed the conflict in eastern Ukraine in their first telephone conversation.

"The leaders discussed the issues of a settlement in the southeast of Ukraine and cooperation in returning detainees from both sides," said the Kremlin in a statement. "They agreed to continue this work at the expert level."

Earlier on Thursday, Putin suggested that he would be open to restarting peace talks under the Normandy format, which includes Germany and France. But he said it was unclear whether other countries, such as the US and the UK, would be willing to join negotiations at the time.

After meeting with EU leaders earlier this week, Zelenskiy — an actor and political novice who won the presidency in April — said he was ready to meet with Putin. "Let's discuss who Crimea belongs to and who isn't in the [separatist-run] Donbass region," Zelenskiy said in a video, addressing Putin. He had previously told DW that Ukraine was ready for peace.

"It will more or less be possible to discuss this after Ukraine's new government is formed and the elections for parliament are held," said Putin in comments carried by state-run TASS news agency.

The fighting has displaced thousands of people and affected more than half a million children, according to UN figures.

International efforts aimed at securing a political solution have failed to gain traction, in part due to hard-hitting sanctions imposed against Russia for its annexation of the Ukrainian territory Crimea. Observers have warned of the potential for a frozen conflict in eastern Ukraine.

Angela Merkel: Germany will come out 'stronger' after pandemic 5h ago