Ukraine to rate Volodymyr Zelenskiy′s Servant of the People | Europe| News and current affairs from around the continent | DW | 24.06.2019

Ukraine to rate Volodymyr Zelenskiy's Servant of the People

The president's Servant of the People party looks set to come out on top in upcoming parliamentary elections. That could shake up Ukraine's political establishment, leading to an odd coalition and unfamiliar opposition. 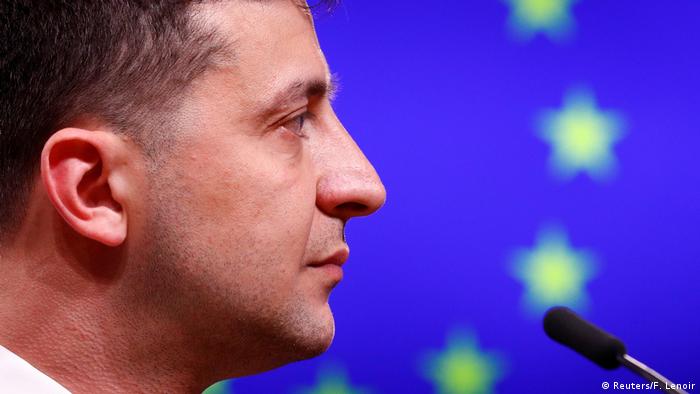 When Volodymyr Zelenskiy won a landslide victory in Ukraine's presidential election in April, he faced governing with a parliament dominated by lawmakers from his opponent's party. So, almost immediately after being sworn into office in May, he dissolved parliament and ordered elections for July 21 — three months earlier than planned.

Ukraine's Constitutional Court ruled in favor of the president's order to dissolve the parliament on June 20, paving the way for elections to the Supreme Rada to be held ahead of schedule.

Zelenskiy has been in office for a month, and polls indicate that his party, Servant of the People, is popular. Up to 50% of the electorate support Zelenskiy's party, placing it well ahead of Ukraine's other parties, even though it existed only on paper until recently and currently has no elected lawmakers. The party is named after the eponymous satirical television show in which Zelenskiy, a former actor, played a teacher who surprisingly gets elected president.

TV similarities aside, the new president is cultivating his image as a political outsider eager to break with conventions and start with a clean slate. He knows how to tap into the disgust that many of his fellow citizens feel for the country's political establishment.

Zelenskiy likes to come across as an affable guy. The 41-year-old surrounds himself with young, hip, middle-class Ukrainians. None of the Servant candidates running for parliament have any prior experience of working in the legislature. Most are between 35 and 45 years old, used to work in the private sector, and are largely unknown to the electorate.

Zelenskiy's Servant of the People claims to represent libertarian positions, a concept many Ukrainians may be unfamiliar with. The party's election manifesto promises to weed out corruption and institute more direct democracy. Zelenskiy seems to place great emphasis on expanding digital technologies in the public sector. His party wants to stick to the country's pro-Western orientation and openness to the EU and NATO, albeit without making any concrete pledges. The pro-EU rhetoric Zelenskiy delivered on trips to Brussels, Paris and Berlin contrasts with rumors that he might favor Russia.

Opinion polls show that Zelenskiy's party is trailed by the Opposition Platform — For Life, which is currently polling at about 10%. It is made up of former members of ex-President Viktor Yanukovych's Party of Regions and is led by 60-year-old Yuriy Boyko, who held the posts of vice prime minister and fuel and energy minister during Yanukovych's rule.

Many candidates in the parliamentary elections are familiar to voters. Viktor Medvedchuk, for instance, once served as chief of staff to former President Leonid Kuchma, and he is known to have close ties to Russian President Vladimir Putin.

Boyko and Medvedchuk recently visited Moscow, where they met the Russian leadership and indicated that they would work toward closer ties. Opposition Platform's election manifesto promises to bring peace to eastern Ukraine. Most of its prospective voters are based in the eastern and southern parts of the country.

It looks likely that the party could join forces with Zelenskiy's Servant of the People — even though the president has so far refrained from making any such promises. The parties have much in common, such as their demand for the right to use the Russian language in public life, and to hold referendums.

A president without experience

The German and French foreign ministers went to Ukraine to lend support to new President Volodymyr Zelenskiy and further reforms. Heiko Maas has hopes of restarting the peace process in eastern Ukraine. (30.05.2019)