The German and French foreign ministers went to Ukraine to lend support to new President Volodymyr Zelenskiy and further reforms. Heiko Maas has hopes of restarting the peace process in eastern Ukraine. 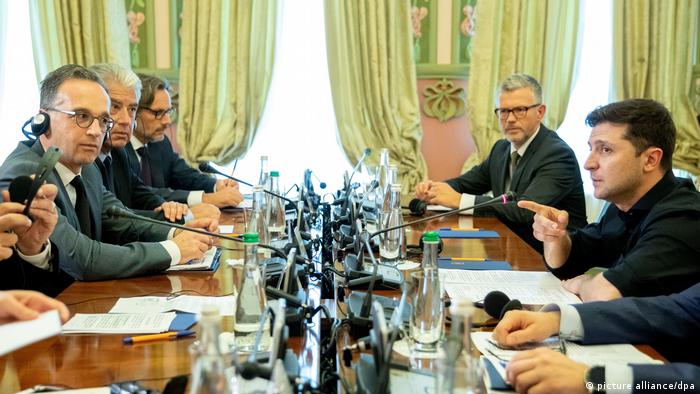 Germany and France are unflagging in their commitment to peace in Ukraine, German Foreign Minister Heiko Maas had said ahead of his visit to Kyiv with his French counterpart, Jean-Yves Le Drian, to visit the country's newly elected president.

"It was important to me to travel with [Jean-Yves Le Drian] to Kyiv after the inauguration of President [Volodymyr] Zelenskiy to make it clear that Germany and France are not slackening in their commitment to Ukraine — indeed, quite the opposite," Maas said in a statement posted by the ministry on Twitter.

"The people in eastern Ukraine need peace at last," he continued. "The dynamics brought about by this election could offer a chance to overcome the stalemate and finally put the peace plan of the Minsk agreement into practice."

After the meeting with Le Drian and Zelenskiy on Thursday, Maas reflected on what he called a "really excellent conversation" and said he was optimistic the peace process could be restarted: "We will take advantage of the moment, the momentum that is currently resurrecting the Minsk process." 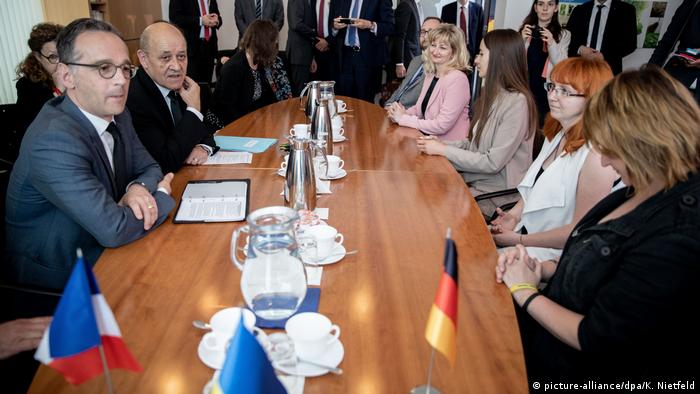 Maas and Le Drian at the German embassy in Kyiv

Maas was referring to an agreement reached in the Belarusian capital by the leaders of Ukraine, Russia, Germany and France in 2015 that aimed to end the war in the eastern Donbass region of Ukraine, where Russian-backed separatist rebels have been fighting government forces for more than five years.

"We will now continue talking with our experts about how the process can be renewed," Maas announced. He said the current deadlock was "not acceptable" and that the people of eastern Ukraine "have been waiting too long for this peace."

Zelenskiy agreed, "Peace is the absolute priority — and that's exactly the case for us."

Le Drian also posted a tweet ahead of the joint visit with an embedded video describing the extent of Franco-Ukrainian relations.

Zelenskiy took office last week after winning a landslide victory in April elections. He has said he was ready to negotiate with Russia on ending the war in Donbass. He has also promised to fight corruption in his country and move it toward membership of the European Union and NATO.

Some 13,000 people have already been killed in the conflict in eastern Ukraine.

Russian forces are advancing ever further into eastern Ukraine. Can Turkey somehow act as a go-between and get Russia and the West talking? Our guests: Daniel Gerlach (Zenith), Gustav Gressel (military expert), Jessica Berlin (political analyst)

Ukraine's military and separatist forces both expressed a willingness to restore a truce, according to the Organization for Security and Co-operation, which has logged an uptick in cease-fire violations of late.