President Vladimir Putin has fielded a string of complaints from Russian citizens during his annual televised call-in show. Western sanctions and falling incomes have seen the Russian leader's popularity slide. 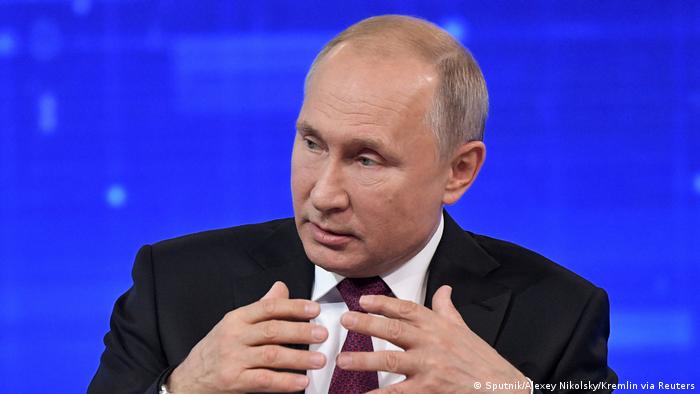 Russian President Vladimir Putin used his annual live call-in show on national television to assure the public that the economy was recovering and salary increases were on the way.

More than 1.5 million people had sent in complaints — and questions — for the "Direct Line with Vladimir Putin" program on Thursday.

Putin's popularity has declined steadily following reforms that lifted the state pension age and years of falling wages. These were some of the grievances Russians raised on the call-in TV show, along with other domestic issues such as potholed roads, rubbish disposal, derelict schools and overcrowded health care facilities.

The president began by telling the audience he understood their concerns about stagnating incomes, but he said the economy was recovering. He also announced wage increases for public sector workers and said a major government spending program would soon deliver higher living standards.

"We are seeing that production has started to grow and inflation has dropped to below 5% and incomes have started to go up," he said, but added that Russia needed to "change the structure of our economy, to make it high-tech, digital."

Putin sought to play down the impact of international sanctions implemented after Moscow's 2014 annexation of the Ukrainian territory of Crimea. While he acknowledged that the restrictions had taken a toll, costing Russia $50 billion (€44 billion), he claimed the damage had been far worse in European Union countries.

He echoed his line that Western sanctions and particularly Russian counter-sanctions had in fact allowed the Russian economy to develop in unexpected ways, including in the agricultural sector.

During a meeting on Thursday in Brussels, EU leaders extended sanctions against Russia by another 12 months.

"The EU remains steadfast in its commitment to Ukraine's sovereignty and territorial integrity," The European Council of leaders said in a statement. "The EU does not recognize and continues to condemn this violation of international law."

Putin described Western sanctions as an attempt to curb Russian power and said the US was trying to achieve a similar goal with China through its trade tariffs and sanctions on Huawei.

The United States wants to "contain the development of China as a global power," he said.

"The same thing is happening with regard to Russia and it will keep going, so if we want to win a place under the sun we simply need to get stronger, primarily in the economic sphere."

A country of contrasts in Russia

Making do in Russia

The show provides an outlet even for critical questions. As in the past few years, some of the public's text messages were shown on screen during the program. One viewer asked, "What will we do when our gas and oil run out?" - a reference to the heavy dependence of the Russian economy on oil prices. Another asked, "When will you finally leave office?"

According to political analyst Ilya Graschenkov, the initial aim of the show was to allow people to have a conversation with the president.

But speaking after the call-in show, he told DW the program has turned into a "lottery, where you can call Putin and have your private problems solved." He even compared Putin's actions on the show with a "Christmas miracle." However, Graschenkov added that "few people believe that the problems will be solved on a more systemic level.

In an unusual move that could show an awareness of people's dissatisfaction, Putin this year took responsibility for the failings of his government. "If someone doesn't do something, then that is also my fault," he said.

Analyst Graschenkov was skeptical that Putin's "Direct Line" show can change his falling popularity. After all, he said, "not everyone gets a miracle."

Instead, he told DW the show is an opportunity for Putin to "feel out the people," rather than the other way around. And the process increasingly shows up a chasm between Putin's perceptions of the country and the people's.

According to independent pollster Levada, two-thirds of Russians approve of Putin's policies, down from 90% in 2014.

Last month the state pollster changed its methodology for opinion surveys after its latest poll showed the public's trust in Putin had fallen to 31.7% — a 13-year low. With the new methodology, however, the approval rating immediately doubled.

The Russian and Chinese leaders hailed ties that had reached an "unprecedented level" after having cozied up repeatedly in recent years. Miodrag Soric reports from Moscow. (04.06.2019)