The Russian and Chinese leaders hailed ties that had reached an "unprecedented level" after having cozied up repeatedly in recent years. Miodrag Soric reports from Moscow. 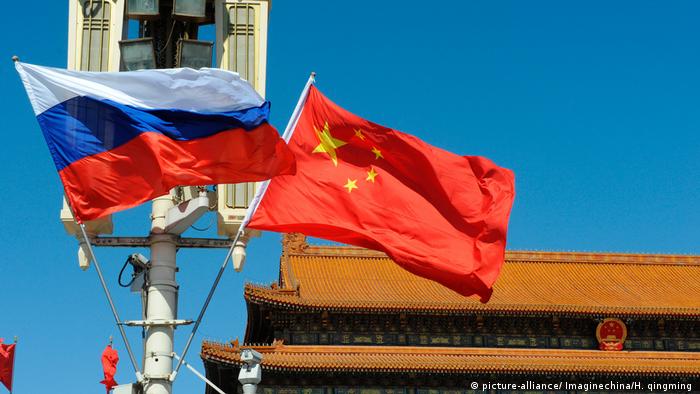 On a visit to China in early April, Russian President Vladimir Putin triumphantly announced that his country had traded goods worth more than $100 billion (€89 billion) with its vast Asian neighbor in 2018, declaring that "China is our strategic partner."

This Wednesday, Putin once again met Chinese President Xi Jinping in Moscow. It was their 28th encounter in six years; it is fair to say they know each other well.

"In recent years, thanks in part to your direct participation, the relationship between Russia and China has reached, without exaggerating, an unprecedented level," Putin told Xi in the Kremlin.

At public events, Putin is keen to highlight the fact that China and Russia work together closely on many diplomatic issues. The two nations, both permanent members of the UN Security Council, often join forces — usually to undermine Western foreign policy initiatives.

Those include US and EU efforts to bring peace to Syria or democracy to Venezuela. Ambassador Li says China "rejects unilateralism," which effectively means China and Russia oppose anything they perceive as a manifestation of "US hegemony."

Trade between Russia and China has increased in 2019, and the governments of both countries have been eager to make this known. But although Moscow is loath to admit it, the two are hardly equal trading partners. While Russia primarily exports resources like oil, gas, coal and wood to China, the latter sells machines, vehicles and consumer goods to its northern neighbor. Moreover, the vast majority of Chinese exports do not go to Russia; in fact only 1.9% do. In reality China sells most its goods to the US and the EU.

Russia, however, sends 15% of its exports to China. Indeed, in 2010 the country surpassed Germany as Russia's most important trade partner. And since 2014, Russia has begun focusing its economic and political attention on China and the Asian region, which certainly has something to do with Western economic sanctions against Russia. As the Minsk peace process is faltering, these sanctions will most likely remain in place.

Moscow finds these sanctions unjustified, and China bemoans a looming trade war with the US. Both nations feel the West is out to harm them and are therefore closing ranks, argues Sergey Karaganov, the dean of the Faculty of World Economy and International Affairs at the National Research University Higher School of Economics in Moscow. He tells DW that he recommended Russia orient itself towards Asia as early as the 1990s. Though he says back then, Russia's leadership thought little of his advice. Later, President Putin made Karaganov one of his official advisers.

But, Karaganov says, much of the Moscow elite still distrusts China, which explains why "the Kremlin is not just playing the Chinese card." In fact, he says, Russia is also fostering closer ties with India, South Korea, Japan and other Asian states.

The countries are also cooperating militarily. In September 2018, they carried out the joint Vostok 2018 military drill in which some 300,000 Russian and 3,000 Chinese soldiers reportedly participated.

Russia continues to sell arms to China, although the latter has started developing more and more of its own weapons. Above all, China is growing its navy at breakneck speed.

When Putin and Xi meet in St. Petersburg, they will also discuss how to improve the infrastructural links along their 4,000-kilometer (2,400-mile) border. While China has ample means to finance such undertakings, this is rarely the case for Russia.

Recently, for example, China swiftly completed its part of a bridge across the Amur River, which runs between the two nations. Russia, however, repeatedly postponed completing its half due tof financial problems.