German foreign minister pledges support for Venezuelan opposition while in Colombia | Germany| News and in-depth reporting from Berlin and beyond | DW | 01.05.2019

Heiko Maas has promised support for Colombia and the Venezuelan opposition during a Latin America trip. On a three-state visit he has met with Brazilian leaders to talk about co-operation between the two countries. 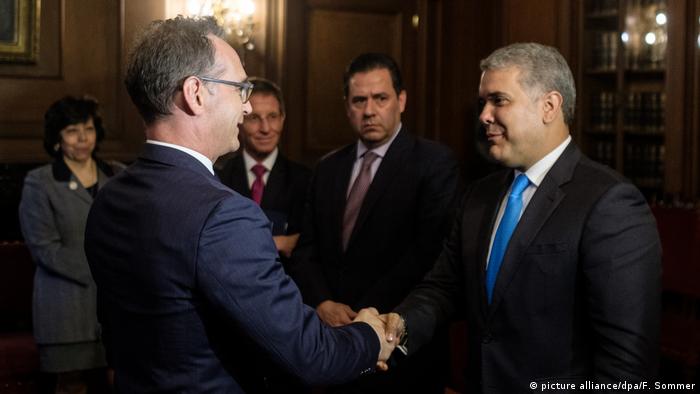 On the second leg of his four-day Latin America tour Wednesday, German Foreign Minister Heiko Maas made a number of commitments to Colombian President Ivan Duque. These involved financial and political assistance in dealing with humanitarian issues.

Foremost among those issues was the pressing problem of hosting growing numbers of Venezuelan refugees fleeing their crisis-stricken land. Colombia currently hosts some 1.5 million Venezuelan refugees, and Colombian Foreign Minister Carlos Trujillo says another 1.8 million could arrive if the political standoff in Caracas does not end soon.

Maas said that Germany would be giving Colombia another €4 million ($4.5 million) on top of the €10 million it has already committed in order to aid Bogota in the task of housing and caring for the refugees.

Clear support of the Venezuelan opposition

He also met with Venezuelan opposition interim Foreign Minister Julio Borges, who is himself exiled in Bogota. Maas was unequivocal about German support for self-declared interim-president Juan Guaido, who is challenging acting-President Nicolas Maduro.

Maas said, "Nothing about our position has changed: For us Juan Guaido is the interim president and he is tasked with organizing new elections."

The foreign minister voiced skepticism over whether dialogue between Maduro and the opposition was possible at this point, especially in light of the escalating conflict, which heated up yesterday as masses of protesters clashed with police and military in the streets of Caracas.

A further confrontation between supporters and opponents of Maduro appeared likely on Wednesday during May Day rallies.

Germany quickly recognized Guaido's legitimacy as Venezuela's interim president after he claimed that position for himself in January.

Critics say that by making such a swift and clear choice Germany forfeited its credibility as a neutral mediator in a political resolution to the crisis. In fact, an internal committee of the German parliament found that the position provided "strong grounds" to believe Germany was meddling in the internal affairs of a foreign country.

Not only about Venezuela

Maas' visit touched on other co-operation with Colombia beyond that related to Venezuela. Germany has been a strong supporter of the peace process that Duque's predecessor Juan Manuel Santos began with FARC rebels in 2016. Although a separate rebel group, the ELN, continues its resistance to Bogota, the FARC has laid down its weapons, ending decades of bloodshed.

Maas sought to encourage political actors as well as the people of Colombia to persevere along the difficult path to peace no matter how arduous and rocky it may be.

He encouraged Colombia's efforts to reintegrate former FARC militia fighters into society, pledging a total of €17.3 million in assistance — €2 million more than previously promised. He was due to visit a FARC reintegration project outside Bogota on Wednesday.

Moreover, Maas announced that Germany would give Colombia another €5 million in development aid.

Dialog with Brazil must be based on shared values

Maas began his trip on Tuesday in Brazil, becoming the first EU foreign minister to visit the country since far-right populist Jair Bolsonaro was elected president. He also met with Foreign Minister Ernesto Araujo during the trip.

Meetings between the three covered a range of topics after which Maas said, "We are open to dialog and to further developing of our relationship." He did note, however, that such dialog would have to be based on a shared understanding of democracy, freedom, human rights, and the rule of law.

Maas announced that he had spoken openly to Bolsonaro about the tone of the dialog as well, notably, that there could be no further "irritations" in the future — a sentiment Maas said the president shared.

Bolsonaro has caused widespread consternation with racist, sexist, and homophobic rants as well as his aggressive anti-environmental stance. He has, for instance, shocked environmentalists and human rights activists alike by pushing policies designed to strip indigenous peoples of their protections in order to step up logging in the Amazon rain forest.

Maas also met with German business leaders in Sao Paolo during his trip in order to get their perspective on the Bolsonaro administration. Some 1,000 German businesses operate in Brazil, and another 600 are German-Brazilian partnerships responsible for 243,000 jobs and 12% of Brazilian GDP.