Fear has returned to Colombia, two years after the government signed a peace deal with FARC rebels. Real peace remains an illusion, as this week’s bomb attack has shown. Ofelia Harms Arruti reports from Bogota. 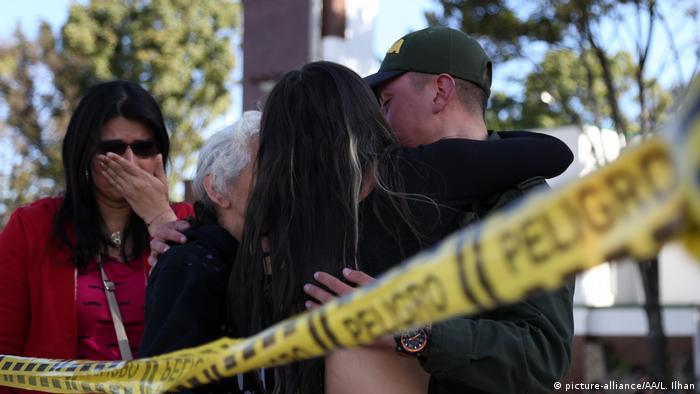 Weeping mothers, wives and children: The scenes outside the General Santander police academy in the Colombian capital were heartbreaking. At least 21 young people died and another 68 were injured in the car bombing in Bogota on Thursday. Most of the victims were aged between 17 and 23.

The bomber is assumed to have been a member of the ELN guerrilla group. The police cadets had just participated in a promotion ceremony when he drove his explosive-laden car into the academy compound and blew it up. The attacker died in the blast, and his motive remains unclear.

Until Thursday, there hadn't been a car bomb in the Colombian capital for ten years. Now the images of the destruction are reviving memories of a war that many had thought was over.

"The aim is to reignite the war, and that is very worrying, no matter who it comes from," says Katherine Torres from the campaign #porunapazcompleta ("For total peace"), which is trying to promote peace talks with the ELN guerrillas. Torres assumes that arranging further talks will now be very difficult. However, she comments that the current government was showing "no desire for peace" even before the car bombing. 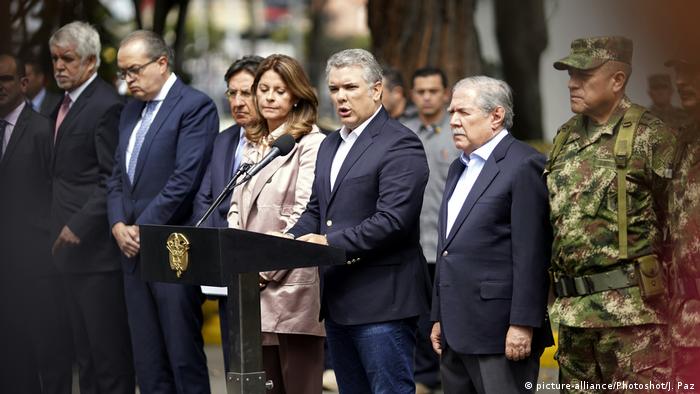 President Duque: If the ELN really wants peace, it must show "it has taken concrete action"

For others, though, the attack confirms that the ELN are the ones with no real desire for peace. In November 2016, Colombia's former president Juan Manuel Santos successfully concluded a peace accord with the other, better-known guerrilla organization, the FARC.

Talks with the ELN were suspended last August, when Santos — who was awarded the Nobel Peace Prize for his efforts — was still president. However, the guerrillas' chief negotiators remained at the negotiating table in Havana, waiting for the new government under rightist President Ivan Duque, to appoint a negotiating team. That never happened. 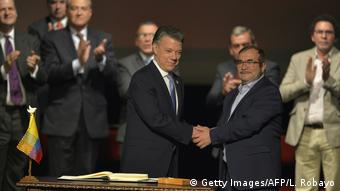 Duque demanded that the ELN — which the United States and the European Union also categorize as a terrorist group — must first release all hostages before negotiations could continue. The day after the car bomb, the president announced that the peace talks were over. "If the ELN really wants peace, it has to show the country that it has taken concrete action," Duque said. Meanwhile, Colombia's High Commissioner for Peace, Miguel Ceballos, said that there was "no room any more for a dialogue with the ELN."

As a result, Hubert Gehring, the director of the Konrad Adenauer Foundation in Bogota, believes the ball is now in the guerrillas' court: "Hopefully at some point the ELN will see a bit of sense, so as to be able to resume a serious attempt at negotiation."

Gehring says Europe has "a false picture of the peace in Colombia," as though the signing of the agreement between the Santos government and the FARC had "solved Colombia's problems."

Meanwhile, Germany's ambassador to Colombia, Peter Ptassek, fears that Thursday's attack could result in a "spiral of escalation" that would "seriously aggravate the country's situation.”

According to Gehring, the international community needs to support Colombia on the most urgent issues. These include regional development, implementing the peace agreement, and aid for the more than a million people who have fled to Colombia from neighboring Venezuela.

"Germany, which has also had to deal with arrival of a million refugees, should be aware of the challenge Colombia is facing — not just on account of the Venezuelans' arrival, but also because of the almost six million internally displaced people."

A car bomb exploded at Bogota's General Santander Police Academy, killing at least 21 people and injuring 68 more. The government has blamed ELN rebels for the blast. (17.01.2019)