More than 30 former guerrillas face allegations of war crimes during five decades of bloody conflict. The historic tribunal was founded under a peace deal. 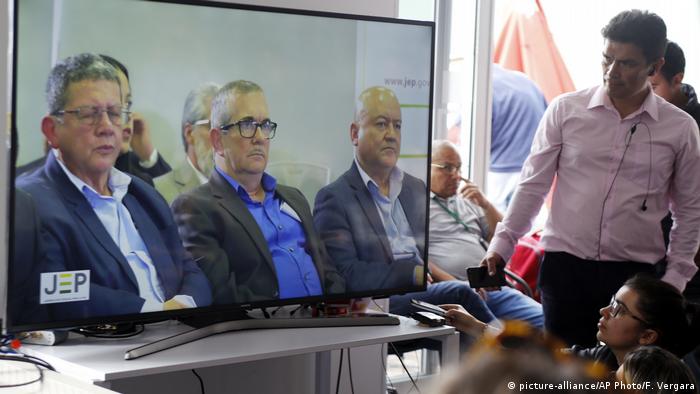 Former commanders of the Revolutionary Armed Forces of Colombia (FARC) appeared before a tribunal to respond to charges of kidnappings and forced disappearances under the terms of a peace deal.

The procedural hearing for "Case No. 001" lasted three hours. It was attended by just three of the 31 leaders of the disbanded guerilla army who were summoned. A fourth FARC leader joined via video conference from prison. The others were represented by lawyers.

Among those who attended the hearing was Rodrigo Londono, also known as Timochenko, who was the FARC's top commander and now chairs its political party.

"Many families have suffered pain, fear and irreparable loss," said Londono. "We ask for their forgiveness and will do everything to ensure that they find out the truth."

The conflict that went on for five decades resulted in at least 250,000 dead, 60,000 missing and millions displaced.

The Special Jurisdiction for Peace (JEP) tribunal, founded under a 2016 peace deal between the government and FARC, will try cases of war crimes. The cases are based on investigations by authorities and accusations from victims.

The tribunal, set to run for at least 15 years, will controversially allow most former combatants who cooperate to escape any time behind bars and enter politics.

President-elect Ivan Duque, campaigned on seeking tougher sentences for FARC leaders, has vowed to change parts of the 2016 peace accord.

During the campaign, Duque also lashed out at the provision in the deal that gives the ex-rebels 10 seats in Congress before serving sentences for any crimes. FARC representatives in each house are due to be sworn in on July 20.

But for many the tribunal will help heal wounds left by the conflict.

"The country will never be the same again," Colombia's High Commissioner for Peace, Rodrigo Rivera, said in a statement.

"The leaders of the FARC before the special tribunal is something that seemed impossible for 50 years."

The tribunal's first case concerns kidnappings that FARC guerrillas committed between 1993 and 2012.

Ransom was a major source of revenue for the rebels, along with drug trafficking and extortion. FARC earned more than $1.25 billion (€1.1 billion) in ransoms from 8,100 kidnappings during those years, according to the attorney general's office.

The hearings are expected to shed light on the remains of some of those who were kidnapped and murdered.

"This shows that the FARC is fulfilling its promise and that they are willing to confess to the victims," said Yolanda Pinto, head of the government's Victims Unit, which helps those affected by the war and ensures they receive compensation.

"I feel satisfied that this will help heal," said Pinto, whose husband was kidnapped and killed by the FARC in 2003.

On Sunday, Colombians head to the polls to pick a new president. Whoever wins will play a crucial role in the country's ongoing peace process. Below, we detail the most important steps taken so far. (26.05.2018)

Marking its first election, FARC has failed to add to its 10 seats granted by the Colombian peace accord. But the Democratic Center secured an increase of more than 40 percent in the lower house by opposing the deal. (12.03.2018)

The once-feared rebel group has started its own political party, but after much deliberation will still be known as FARC. Under a peace agreement, the group will automatically get 10 seats in Congress. (01.09.2017)