Germany to Venezuela: Hold elections or we recognize Guaido

Germany and Spain say Venezuelan President Nicolas Maduro must hold elections. If not, both would consider following the United States in recognizing the head of the opposition as president. 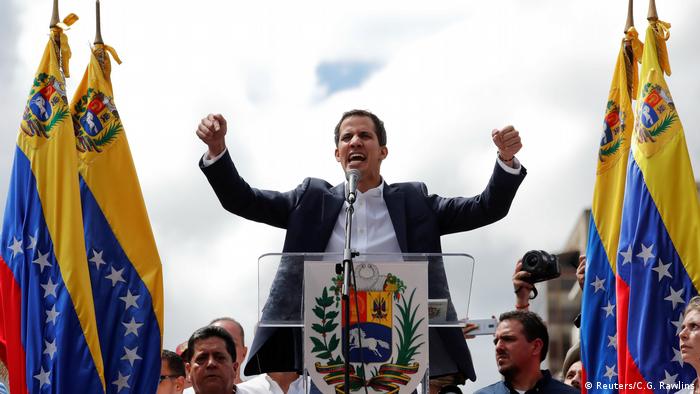 Germany and Spain said on Friday that Venezuelan opposition leader Juan Guaido should be recognized as president if standing President Nicolas Maduro did not agree "immediately" to hold new elections.

"The German government will speak in forthcoming EU consultations in favor of recognizing Juan Guaido as interim president, unless such free and fair elections are held immediately," German government spokesman Steffen Seibert said.

Maduro, he added, had lost his legitimacy as president because his re-election in 2018 did not meet democratic standards.

"The cry of millions of people for democracy and the chance to determine the fate of their country in free and fair elections can no longer be ignored," Seibert said.

Earlier this week, opposition lawmaker Guaido declared himself acting president of Venezuela in a stunning move that undermined Maduro's authority.

The US immediately recognized him as the legitimate president of the oil-rich, cash-strapped country, with most countries in the Americas quick to follow suit, including Brazil and Canada.

German Foreign Minister Heiko Maas told DW that Berlin supports "what Guaido is doing," but he stopped short of voicing support for recognizing him as president.

"This is why we are calling for fresh elections, for the National Assembly to assume responsibility and for the force of constitutional law to be restored to Venezuela," Maas said. "We've made that known together with our European partners and that's going to be our policy in the coming days."

Other European countries, including France and the United Kingdom, have also voiced their support for the opposition. European Council President Donald Tusk has called on all EU countries to "unite in support of democratic forces in Venezuela."

Some Latin American countries and Russia, however, have said they continue to recognize Maduro as president and warned against external interference in the crisis.

Under Maduro, who was first elected in 2013, Venezuela's economy has collapsed as a result of runaway inflation. Resulting food and medicine shortages have spurred more than a million people to flee to neighboring Colombia and Brazil.