Venezuela is in the midst of a political crisis after opposition politician Juan Guaido declared himself president. DW takes a look at how countries in South America and beyond reacted to the move. 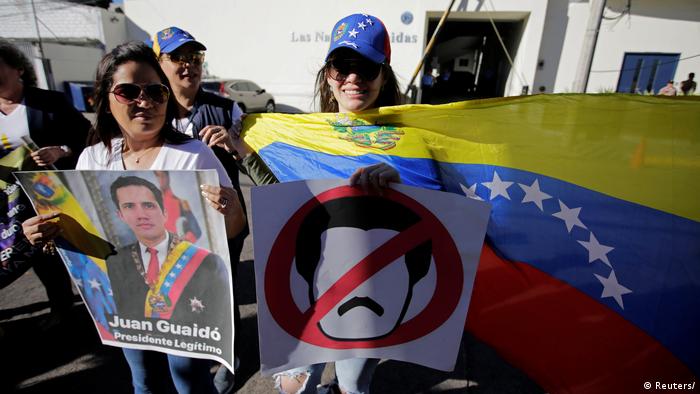 Venezuela's opposition leader and president of the National Assembly, Juan Guaido, stunned the world on Wednesday when he declared himself acting president.

The move has split opinion in the international community, with some countries recognizing the 35-year-old as president, several voicing support for President Nicolas Maduro, and others calling for fresh elections.

United States: President Donald Trump declared Guaido the legitimate president via Twitter. He also pledged US economic and diplomatic power to "press for the restoration of Venezuelan democracy."

Lima Group: Thirteen of the bloc's 14 members — Argentina, Brazil, Canada, Chile, Colombia, Costa Rica, Guatemala Guyana, Honduras, Panama, Paraguay, Peru and Saint Lucia — recognized the move in a joint statement. Brazilian President Jair Bolsonaro said: "In a note I have recognized Juan Guaido as Venezuelan president ... we will give all political support to take this process to an end."

Bolivia: Leftist President Evo Morales also wrote on Twitter: "The claws of imperialism are again trying to deal a death blow to democracy and self-determination."

Mexico: The government of President Andres Manuel Lopez Obrador refused to sign the Lima Group statement and instead said it would continue recognizing Maduro as president.

Russia: The Kremlin said Maduro was the legitimate president and warned that any external attempts to support regime change went against international law

Turkey: A presidential spokesman wrote on Twitter that Turkey stood by Maduro. He wrote: "My brother Maduro! Stay strong, we are by your side."

China: The foreign ministry said Beijing rejected external interference in Venezuela and fresh sanctions against Maduro's government. "China supports the efforts of the Venezuelan government to protect the sovereignty, independence and stability of the country," a spokesman said.

And how did Europe react?

German Foreign Minister Heiko Maas said: "We call on all actors in Venezuela to exercise prudence and renounce violence."

In a statement released on Thursday, the EU said that civil rights, freedom and the safety of Juan Guaido all need to be "observed and respected."

The European Union's foreign policy chief, Federica Mogherini, called for "free and credible elections." The bloc did not recognize Guaido as president.

Similarly, the Vatican did not take sides on the developments coming out of Venezuela. In a statement, the Vatican said that Pope Francis "has been informed of the news" and that he is "supports all efforts that help save the population from further suffering."

Donald Tusk, the president of the European Council, which represents the EU member governments, said separately that "unlike Maduro," Guaido has "a democratic mandate from Venezuelan citizens" because he was elected to Venezuela's parliament. Tusk called for a united response from EU countries that "supports democratic forces."

French President Emmanuel Macron hailed the "courage" of protesters and tweeted that 'Europe supports restoration of democracy' in Venezuela following the "illegitimate election" of Nicolas Maduro.

Stopping short of explicitly recognizing Guaido as Venezuelan president, a spokesman for British Prime Minister Theresa May said: "We fully support the democratically elected National Assembly with Juan Guaido as its president."