Judges have issued arrest warrants for 16 ELN commanders for maintaining the group's "criminal activity" with children. Fragile peace talks have been cast into doubt after the guerillas kidnapped police and soldiers. 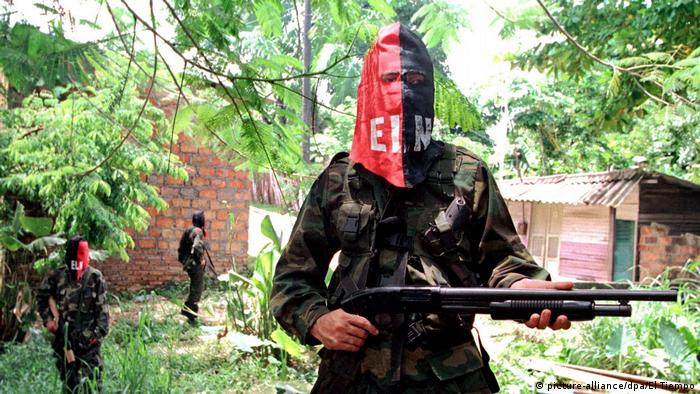 Prosecutors said Sunday they had evidence that at least 71 children between the ages of 7 and 17 had been recruited by the militant group, but noted the figure could be much higher.

The children were made to carry long-range weapons during forced marches as well as guard detainees and kidnapped victims, according to court documents.

"The guerilla group maintains its criminal activity with the forced use of children and adolescents," prosecutors said in a statement.

The warrants come as the Colombian government attempts to secure a peace deal with the ELN. But the ELN's actions over the past month have thrown negotiations into disarray.

On Friday, Colombia's new president, Ivan Duque, called on ELN rebels to release nine hostages, including three police officers and four soldiers. He threatened to pull the government out of peace negotiations if they failed to do so.

Read more: In Colombia, it's danger to be left-wing

"The message is singular and very clear: If the ELN really has the desire to demobilize, disarm and rejoin [civil society], it must liberate the hostages quickly and without conditions," said Duque.

The ELN is the last recognized armed militant group operating in Colombia after the Revolutionary Armed Forces of Colombia (FARC) demobilized and transformed into a political party under a 2016 peace deal negotiated by the former president, Juan Manuel Santos.

Polls have pointed to leftist candidate Gustavo Petro winning big, but not necessarily enough to avoid a second round. A win for the ex-guerrilla would mark a substantial shift in Colombia's political tradition.