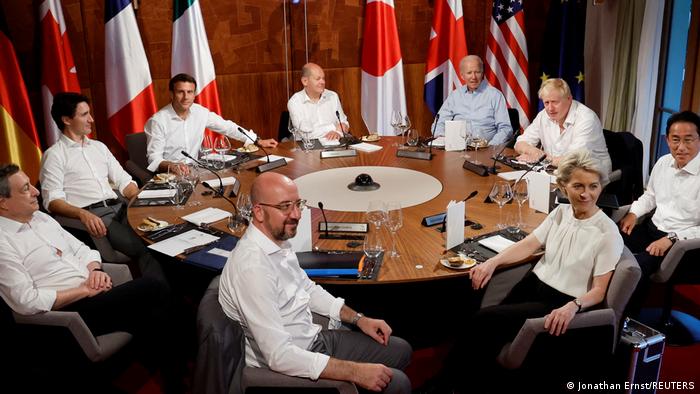 Leaders of the Group of Seven (G7) began three days of talks on Sunday in Germany's Bavarian Alps with Russia's invasion of Ukraine set to dominate the agenda.

One of the first announcements was a $600 billion (€568 billion) infrastructure initiative to help developing countries tackle climate change. The initiative is seen as the West's response to China's massive Belt and Road Initiative (BRI).

"I want to be clear — this isn't aid or charity," Biden said. "It's an investment that will deliver returns for everyone, including the American people and the people of all our nations. It will boost all of our economies."

Beijing has been accused of trapping low-income countries into unaffordable debts to be part of its trillion-dollar BRI push, which is seen as expanding China's trade power with Africa, Asia and Europe.

The new G7 fund will focus on climate initiatives, among other projects, including a $2 billion solar farm investment in Angola, $320 million for hospital construction in Ivory Coast and $40 million to promote regional energy trade in Southeast Asia.

"Our work on promoting infrastructure globally is also affected by the current geopolitical situation," he said. "We have therefore discussed how our investment globally in climate-neutral and low carbon energy, including gas, can help us as a temporary response to Russia's use of energy as a weapon."

Scholz and Biden held a bilateral meeting on the sidelines of the G7 summit, where the US president complimented the German chancellor for "stepping up" to hike defense spending by €100 billion ($106 billion).

He added that Germany was one of Washington's most important allies after the two appeared briefly before the press.

Biden also said the G7 states and the NATO alliance must "stay together" in the face of Russia's invasion.

Shortly before the summit began, London announced in a statement that the UK, along with the US, Japan and Canada, would ban new imports of Russian gold to tighten the economic effect of sanctions on Russia.

The joint action "will directly hit Russian oligarchs and strike at the heart of Putin's war machine," British Prime Minister Boris Johnson said in the statement.

Washington said the decision will be formally announced as a G7 move on Tuesday.

The UK said that Russian gold exports reached around $15.5 billion in 2021 and that this figure has gone up since sanctions were imposed as a means of getting around them.

German Chancellor Olaf Scholz and US President Joe Biden were also expected to discuss proposals to tackle the sharp rise in food and oil prices across the world, as well as inflation, with the leaders of Canada, France, Italy, Japan and the United Kingdom. The G7 leaders are also due to tackle climate change, with Germany pressing for the creation of a "climate club" to set practical targets for reducing emissions for the participating countries.

He also highlighted the importance of tackling the food security crisis, partly by getting Ukrainian food products to the global market and by supporting the EU's partners that have been most hit by food shortages.

Berlin hosted a global conference on Friday to discuss this issue.

Some 200 protesters set off around midday in the small town of Garmisch-Partenkirchen, close to the Elmau castle where the summit is being held.

Organizers told the dpa news agency that they expected the number of protesters to increase to around 2,000. A large number of police officers were also present to escort the demonstration. A larger protest took place in the nearby major city of Munich on Saturday, but with significantly fewer than the expected 20,000 participants.

German police on Sunday said that four protesters from the Munich march had been arrested under charges of having caused bodily harm.

G7 leaders return to Germany to deal with past failures

How will the German military spend €100 billion?