EU and US similar, but split on China, Merkel says

German Chancellor Angela Merkel made the comments after Joe Biden joined a summit of EU leaders — the first time in 11 years a US president has joined. 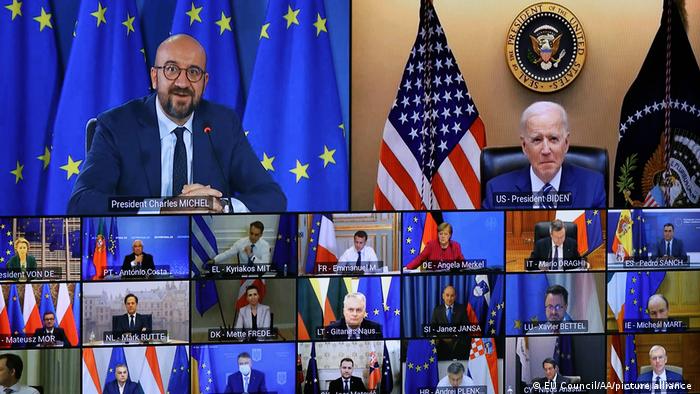 German Chancellor Angela Merkel said that the EU had much in common with the US but that it differed on China policy, after a video summit with the EU's 27 leaders and US President Joe Biden.

Biden is looking to rebuild ties frayed by former president Donald Trump  and the US — hoping to forge a front against the rising power and influence of China — is keen to enlist the EU.

Biden's video call marked the first time since 2009 that a US president had joined talks with the EU's 27 leaders in a summit.

"We see that these values of democracy and the of the rule of law are under pressure," said Merkel, speaking generally about the transatlantic community of values. However, she stressed — using China as an example — this did not mean the US and EU agreed on everything.

The EU would share "no identity" with Washington on China, Merkel said. "That is absolutely clear."

Merkel did say it was important for the EU itself to have a common identity on China, adding that she was fighting for this.

The EU and US positions on China

The EU has shown willingness to work with China. In late 2020, the EU and China reached an investment deal, known as the Comprehensive Agreement on Investments (CAI) that removes barriers to foreign investments in China for certain EU industries.

The US, meanwhile, under Trump pursued a hardline stance against China over trade, the coronavirus pandemic, the contested South China Sea and human rights abuses.

A recent meeting between top US and Chinese officials in Alaska appeared to signal no change in policy under Biden after the two sides traded barbs.

EU and US standing 'shoulder-to-shoulder'

"By standing together, shoulder-to-shoulder, the EU and US can show that democracies are best suited to protect citizens, promote dignity, and generate prosperity," European Council President Charles Michel wrote on Twitter after chairing the summit.

"It was the opportunity for POTUS to express his vision of our future cooperation. And for us to express our strong commitment to this fundamental transatlantic alliance," Michel tweeted.

"What we're seeing is these values of democracy and the rule of law are under pressure again, there are threats, internal and external threats ... and more than ever now the United States and the European Union have a responsibility for the generations to come," Michel told a news conference after the summit.

The summit is not the only sign of a move to build bridges between the EU and US under Biden.

On Monday they unveiled synchronized sanctions over the crackdown on the Uyghur minority in China.

They also agreed earlier this week to suspend tit-for-tat tariffs imposed during Trump's time over a trade dispute involving Boeing and Airbus.

The EU and Biden have signaled they plan to work more closely on tackling the COVID pandemic and climate change.