The new US president spoke to his French counterpart for the first time since taking office. Joe Biden and Emmanuel Macron sought to mend the strained relations after four years of Donald Trump. 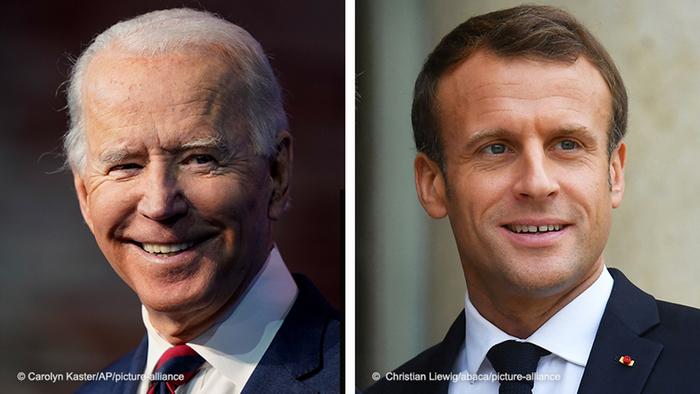 US President Joe Biden spoke to French President Emmanuel Macron and expressed the US' desire to "strengthen bilateral ties with our oldest ally," the White House said in a statement on Sunday.

Biden also emphasized "his commitment to bolstering the transatlantic relationship, including through NATO and the United States' partnership with the European Union," according to the statement.

The two leaders spoke for the first time since Biden's inauguration on Wednesday.

In a separate statement, Macron aides said the two leaders were in agreement on climate change and on ways to fight the coronavirus. They also discussed "their willingness to act together for peace in the Near and Middle East, in particular on the Iranian nuclear issue", the Elysee palace said.

Biden and Macron pledged to work together on shared foreign policy priorities, including China, the Middle East, Russia, and West Africa's Sahel region where France is leading an international military operation against Islamic extremists.

Biden's phone calls to European leaders were seen to be aimed at mending the strained transatlantic ties after four years of "America First" under Donald Trump.

The new US president reaffirmed his commitment to NATO which had been a bone of contention between Trump and European leaders.

Under Donald Trump, the US repeatedly questioned the alliance and accused other countries of not paying their fair share.

Macron and Trump were also at odds over several issues, such as the war in Syria and US withdrawal from the Paris climate accord, which Biden moved to reverse on his first day in office.

During the conversation with Biden, Macron stressed the importance of working jointly within the World Health Organization — which Trump has abandoned — to help ensure vaccine distribution to poor countries.

However, Macron's office on Sunday also said that the two leaders would not shy away from thorny issues.

France is notably pushing for globally consistent taxes on US tech companies such as Google and Amazon, which led to an ongoing trade dispute with Washington under Trump.

The US and the European Union have also imposed tit-for-tat tariffs over subsidies to US plane maker Boeing and its France-based rival, Airbus.