Airbus-Boeing WTO dispute: What you need to know | Business | Economy and finance news from a German perspective | DW | 13.10.2020

The spat is in focus with the WTO allowing the EU to impose tariffs on billions of dollars worth of US goods. DW takes a look at the 16-year-old case that has seen the two allies duel over aircraft subsidies. 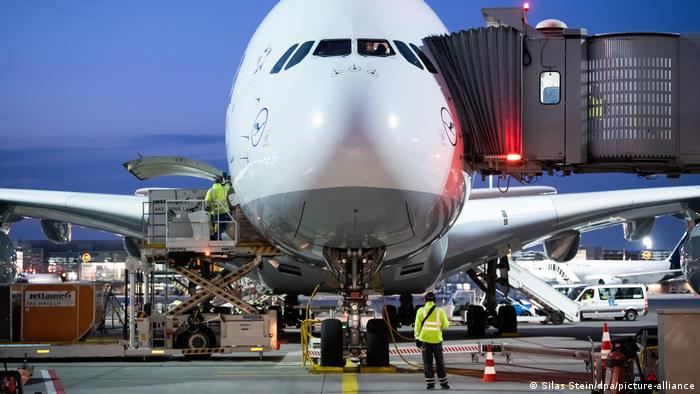 What is the dispute all about?

The European Union and the United States claim that each other's airplane manufacturer is unfairly subsidized.

It was the US that first filed a case with the World Trade Organization (WTO) in 2004 claiming that Airbus, which is jointly owned by Germany, France, Spain and Britain's BAE Systems, had received $22 billion (€19.4 billion) in illegal subsidies. US officials estimated that the subsidies had resulted in an economic benefit of more than $200 billion.

The EU retaliated with a counter case, alleging that Boeing had received $23 billion in "trade-distorting" subsidies in the US mainly for its research and development projects.

What has the WTO found?

Over the years, the WTO has ruled that both sides unfairly subsidized their aircraft makers.

In 2018, the WTO's appeals body upheld a 2016 ruling that the EU had supported Airbus with subsidized loans for the development of new aircraft — the A380 superjumbo and the A350 twin-aisle jet. The world body also found that the loans, which were repayable on delivery, amounted to illegal assistance.

Last year, the WTO handed the EU a victory in its counter case, saying America's favorable contract terms and tax breaks to Boeing had hurt Airbus sales. Interestingly, both the US and the EU claimed victory on hearing the decisions.

Ruling on the US sanctions request, the WTO in October 2019 allowed the US to impose tariffs on up to $7.5 billion worth of EU goods, the largest award in the trade body's history but well below the US request. The US trade office had estimated the harm from the EU subsidies to Airbus at $11 billion in trade each year.

Now a year later, the WTO has allowed the EU to impose tariffs worth $4 billion on US goods. That figure falls short of EU estimate of $12 billion in damages caused to Airbus by US support of Boeing.

How have EU and US responded?

After winning the $7.5 billion award, the US imposed additional tariffs of up to 25% on some EU and UK products, ranging from aircraft to sweet biscuits and cheese to wines.

Washington has the option of periodically modifying the list of targeted products and has already revised it twice to keep the pressure on its transatlantic trade partners.

The EU has prepared its own list of US products worth $20 billion for countermeasures. The list covers a range of items, from aircraft to chemicals and citrus fruit to ketchup.

Can a truce be reached?

Experts say the $4 billion award for the EU could finally set the stage for negotiations between the two sides, especially at a time the coronavirus pandemic is wreaking havoc on the global economy with the aviation sector being one of the worst-hit.

So far, both sides have blamed each other for not showing any interest in talks to resolve the dispute.

The US eliminated a preferential tax rate for aerospace manufacturing earlier this year to comply with the WTO rules. It says there is no valid basis for the EU to retaliate against any US goods now that the subsidy has been removed.

In July, Airbus, for its part, agreed to modify the terms of the repayable launch aid granted by France and Spain for the development of the A350 aircraft. The European Commission said the changes meant that the bloc was in full compliance with the rulings of the WTO in the dispute and that there was no ground for the US to maintain its countermeasures on EU exports.

Just days after reaching a truce over trade with China, the US government on Monday increased pressure on Europe in a long-running dispute over aircraft subsidies. (02.07.2019)