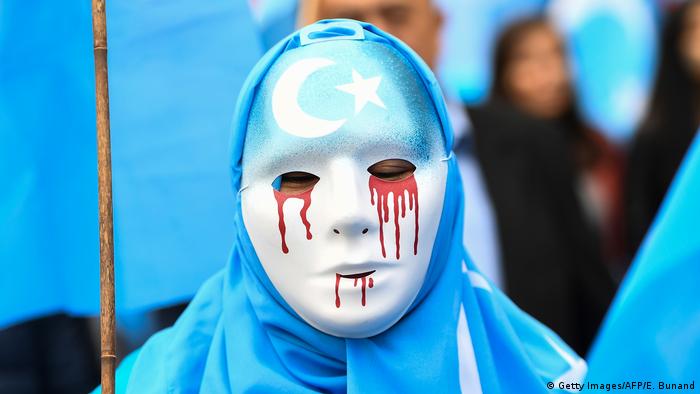 China on Monday said it had decided to impose sanctions on 10 European Union citizens, including politicians, for "gross interference" in its internal affairs, and for "flagrantly violating international law."

In a statement, China's Ministry of Foreign Affairs announced it would endorse sanctions against the individuals and four EU entities for "maliciously spreading lies and false information."

On the list of individuals to be sanctioned are five members of the EU parliament — Reinhard Butikofer, Michael Gahler, Raphael Glucksmann, Ilhan Kyuchyuk and Miriam Lexmann — EU human rights and security committee members, and Adrian Zenz, a US-based German scholar who has published reports of abuse against minorities in Tibet and Xinjiang.

Beijing said it will also sanction EU entities including Germany's Mercator Institute for China Studies and a Danish democracy organization.

China's foreign ministry says all relevant personnel and their family members will be prohibited from entering mainland China, as well as the Special Administrative Regions of Hong Kong and Macao, adding that their affiliated companies and institutions have also been restricted from communicating with China.

EU, US, UK, Canada move against China over Uyghurs

The move comes shortly after the EU agreed to sanction China for human rights abuses against the Uyghurs at a foreign ministers meeting earlier on Monday in Brussels.

Four regional and party representatives, as well as a construction firm from Xinjiang province, were added to the EU sanctions list, with their names published in the EU Official Journal.

The EU has not issued punitive sanctions on China for human rights abuses since the Tiananmen Square massacre in 1989.

The construction company hit with sanctions was the Xinjiang Production and Construction Corps Public Security Bureau.

Later on Monday, the US also said it would sanction Wang Junzheng and Chen Mingguo.

He also accused Beijing of committing "genocide and crimes against humanity" in the province and called on china to release "all those arbitrarily held in internment camps and detention facilities."

UK also announced sanctions for what they described as "industrial-scale abuses" in Xinjiang, while Canada issued similar measures on four Chinese officials and one entity.

The decision came as EU foreign ministers agreed on a series of different sanctions against various countries and entities.

The EU is also set to sanction several individuals and entities from North Korea, Russia, Libya, Eritrea and South Sudan.

Eleven individuals involved in Myanmar's military coup and the repression of demonstrators there were also hit with restrictive measures.

Why would the EU impose sanctions on China?

In the last few years, hundreds of Uyghurs, as well as other ethnic minorities in China such as Kazakhs and Huis have testified about being held in internment camps.

Observers say such facilities are part of a government campaign to forcibly assimilate ethnic minorities, sometimes using torture and forced labor. Mass rapes and the forced sterilization of women are also alleged to have taken place in the camps.

Beijing says the camps — which are estimated to have held more than 1 million people since 2017 — are "vocational education centers" to prevent extremism and terrorism.

Michelle Bachelet, the outgoing UN High Commissioner for Human Rights and former President of Chile, told DW the attacks against her office for delaying the publication of a report into the Uyghurs in China are "unfair."