German Foreign Minister Heiko Maas said the EU could not avoid imposing sanctions on individuals responsible for violence in Myanmar. He said the number of "murders" in the country has "reached an unbearable extent." 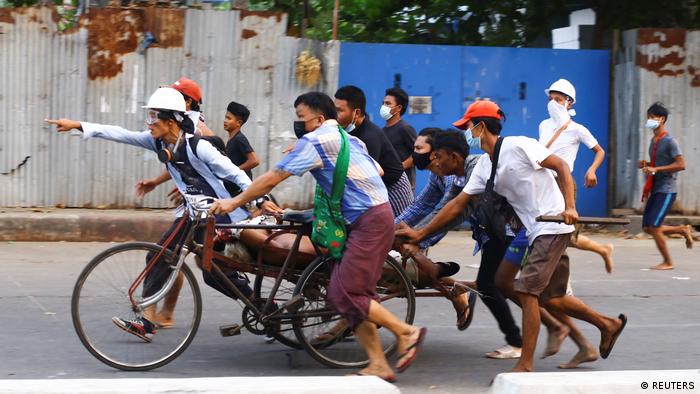 The European Union  approved sanctions against individuals tied to the Myanmar coup on Monday, at a meeting of EU foreign ministers in Brussels.

The sanctions mark the most significant EU response so far to the coup. At least 250 people have been killed so far in violent crackdowns on the ongoing anti-junta protests.

Among those sanctioned was junta chief Min Aung Hlaing, who has been slapped with an assets freeze and visa ban blacklist.

"Commander-in-Chief Min Aung Hlaing has been directly involved in and responsible for decision making concerning state functions and is therefore responsible for undermining democracy and the rule of law," the bloc's official journal said. A total of 11 individuals involved in Myanmar's military coup and the repression of demonstrators were targeted.

German Foreign Minister Heiko Maas said Monday that the EU intended to only target individuals who were responsible for violence in Myanmar.

"The number of murders has reached an unbearable extent, which is why we will not be able to avoid imposing sanctions," Maas told reporters as he arrived in Brussels.

"We don't intend to punish the people of Myanmar but those who blatantly violate human rights," he said.

"We are still pushing to stay in dialogue for a peaceful solution, " he added.

UN rapporteur Tom Andrews had urged the international community to cut the coup leaders' access to resources and called for sanctions in response to their "ruthless" attacks on people.

"The world must respond by cutting their access to money and weapons," he tweeted.

A "firm, unified international response" is urgently needed, he said, according to his spokesman.

These kind of measures targeting Myanmar's conglomerates, which range from mining to manufacturing, would block EU investors and banks from conducting business.

The EU has had an arms embargo on Myanmar since 2018, and had already targeted several senior army officials with sanctions.

Outside of Myanmar, the EU ministers are also expected to endorse sanctions against various individuals and entities for human rights atrocities.

Under consideration are sanctions against four individuals and one entity from China for their involvement in human rights abuses of the Uighur Muslim population in Xinjiang province.

The EU is also on course to sanction several individuals and entities from North Korea, Russia, Libya, Eritrea and South Sudan over human rights abuses, according to diplomatic sources.

The EU's seventh round of sanctions will target gold and tighten rules on previous packages. The bloc wants to ease the imports of Russian food and medicine.