Fresh bloodshed was reported in Myanmar as protesters returned to the streets to march against the military junta. 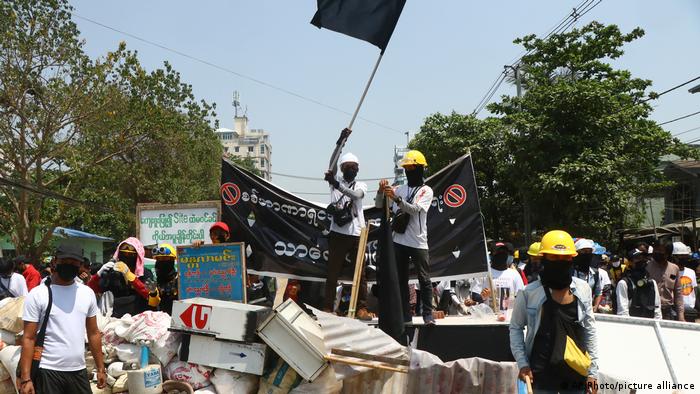 Protesters have used barricades to slow down security forces

Opponents of the Myanmar junta came out onto the streets across Myanmar on Saturday as they maintained their defiance of the military coup and the ensuing violent crackdown.

At least one person was killed overnight in the northern ruby-mining town of Mogok when security forces opened fire.

"One [person] died on the spot last night while two others are in critical condition in the hospital," a rescue worker told AFP news agency.

Photos shared on Twitter showed students and residents gathering on Saturday morning in the town of Bago, northeast of Yangon.

Previously, the AFP news agency reported that the military was forcing civilians to dismantle the makeshift barricades of bamboo, brick, and burning tires in the country's biggest city of of Yangon. The civilians were forced to work at gunpoint, according to the report.

More than 230 people have died since the beginning of the coup on February 1.

Asian countries have joined others in condemning the coup and calling for an end to the violence. On Friday night Malaysia backed a call by Indonesia President Joko Widodo for an urgent meeting by the Association of Southeast Asian Nations (ASEAN).

"We in Malaysia, and the larger ASEAN community, cannot afford to see our brotherly nation of Myanmar become so destabilized at the hands of a selected few, who seek to promote their own vested interests," Malaysian Prime Minister Muhyiddin Yassin said.

The Philippines and Singapore also called for action against the coup which ousted elected leader Aung San Suu Kyi.

Condemnation and pressure from outside of Myanmar has continued to grow. UN Secretary-General Antonio Guterres repeated his condemnation of the military's violence on Friday, calling for a "firm, unified international response."

The coup was also formally condemned by the US House of Representatives.

The US Embassy in Yangon said in a tweet on Saturday that it welcomed "the work of the UN to collect evidence of human rights violations committed in Myanmar since the military coup. It is important that evidence is recorded so that those responsible can face justice and be held to account."