Witnesses say security forces have opened fire on demonstrators in the town of Aungban. People have been taking to the street since a military coup at the beginning of February. 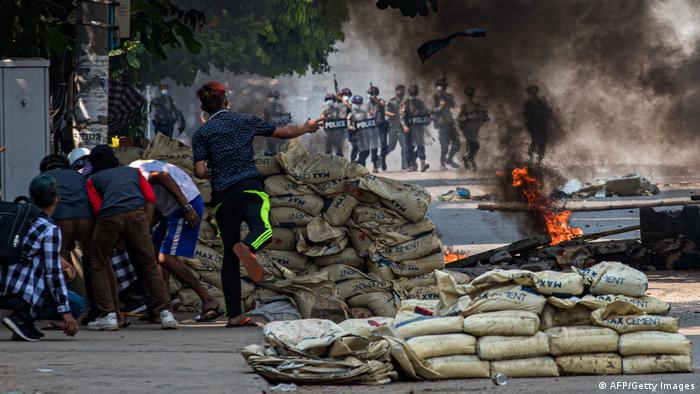 Security forces have become increasingly violent in their response to protests

Another protester was taken to hospital, but died from their injuries, a local funeral service worker confirmed to Reuters.

Security forces were attempting to remove a barricade in the town. They used teargas to disperse protesters, but then opened fire, witnesses reported.

"Security forces came to remove barriers but the people resisted and they fired shots," one witness, who declined to be identified, told Reuters.

The total number of people killed during the protests in recent weeks rose to at least 232, according to a tally by the Assistance Association for Political Prisoners Activist group.

Witnesses reported demonstrations in the main city of Yangon — where police forced protesters to clear barricades — as well as in Mandalay and the central towns of Myingyan and Katha.

The military junta on Thursday arrested the spokesperson for the National League for Democracy (NLD) — Aung San Suu Kyi's political party. Kyi Toe had been giving updates on the condition of the country's deposed leader since the coup began on February 1.

At least two members of the NLD have died in custody.

Authorities also continued their crackdown against the press, arresting two more journalists, including a reporter for the BBC.

"We are still doing our job. We are going around the cities in private cars trying to record the scenes or whatever is going on the streets," he said.

The outlet took measures ahead of the coup to prevent it from being unable to report.

"We anticipated that all the independent media would [be] attacked in the event of the coup," Swe Win said, adding that he moved to evacuate the offices just days before the military seized power.

"The junta's forces raided my office 10 days ago. They confiscated our computers and our data servers," he said.

Though the police and soldiers "knew that we were no longer in the office, they wanted to crush all our operations," Swe Win continued.

"The junta is trying to restore the Orwellian state Myanmar had been in for decades," he added.

They are "trying to obliterate any sort of opposition against it — including the media. We can't say that we have any kind of freedom left in this country," said Swe Win.

How have Myanmar's neighbors responded?

Indonesian President Joko Widodo took the almost unprecedented step of calling for democracy to be restored in Myanmar in a speech on Friday.

"Indonesia urges that the use of violence in Myanmar be stopped immediately so that there are no more victims," Widodo said in a virtual address.

"The safety and welfare of the people must be the top priority. Indonesia also urges dialogue, that reconciliation is carried out immediately to restore democracy, to restore peace and to restore stability," he added.

Indonesia had led talks among neighboring countries in early March to an end to the violence but failed to make any headway.

Usually, the members of the Association of Southeast Asian Nations (ASEAN) avoid commenting on each other's internal affairs, but the Myanmar crisis has brought this principle into question.