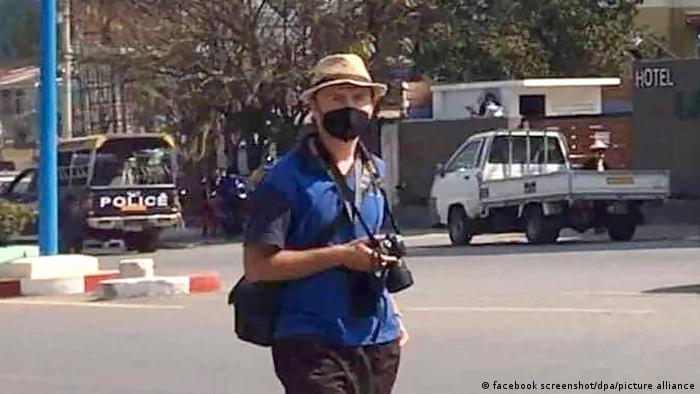 Security forces in the city of Taunggyi in Myanmar arrested a Polish journalist working for the German Press Agency dpa on Thursday, local media reported on Friday.

The 30-year-old Robert Bociaga was allegedly beaten up and injured, a reporter for local Khit Thit Media wrote on Facebook. The news was corroborated by the Myanmar Mix portal as well as several social media users.

The German Press Agency said that it was not currently in contact with Bociaga.

"The arrest and apparent mistreatment of Robert Bociaga is deeply upsetting. We are greatly concerned for our colleague," dpa Editor-in-Chief Sven Gösmann said.

The news of Bociaga's arrest came as courts extended the pre-trial detention of a photographer working for Associated Press.

An 'unacceptable attack' on press freedom

The Polish Foreign Ministry confirmed the reports from the Polish consulate in Thailand and the German consulate in Myanmar in the Polish newspaper Gazeta Wyborcza that a Polish journalist had been arrested in the country.

A spokesperson for the German Foreign Ministry said that it was aware of the case and was making attempts to provide consular support for the journalist.

"Journalists must be free to report on the developments in the country and the protests. We strongly condemn the army's actions against media workers," said Christian Mihr, head of the non-profit's German branch.

"After the military coup, press freedom in Myanmar was set back 10 years in just a few days."

"This is an intolerable, unacceptable attack on the freedom to report the news — and in its brutality is, unfortunately, not an isolated case," Gösmann said.

Journalists have become a key target for repression in Myanmar as the military junta has begun to violently crackdown on widespread protests.

Several protesters have been killed in clashes with police and security forces since the military overthrew the elected government led by Aung San Suu Kyi at the beginning of February.

Local journalists have also been arrested, but until now foreign journalists were considered relatively safe.

In February, security forces arrested a Japanese journalist but released him shortly afterward. Several important media companies had their licenses in the country revoked in early March.