Myanmar coup: Military cracks down on free speech, press freedom | Asia | An in-depth look at news from across the continent | DW | 10.03.2021

Myanmar's junta is seeking to control the flow of information by putting pressure on journalists, imposing stricter censorship laws and internet blockades. 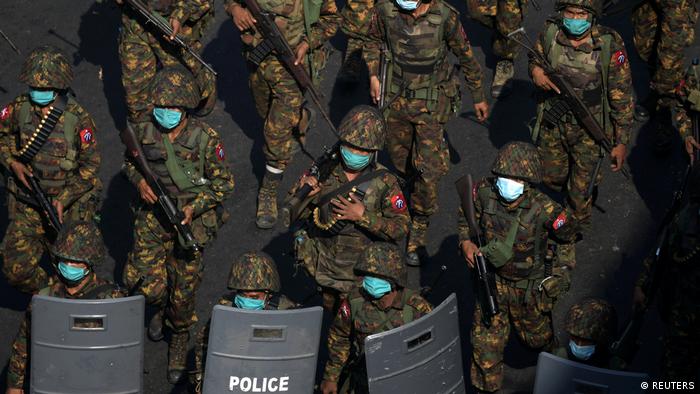 The first victim of a military coup is the truth. On March 3, the 19-year-old protester Kyal Sin ("Angel") was shot in the head and killed. She was wearing a T-shirt with the words "Everything will be OK." Eyewitnesses stated that she had been shot by sniper fire from security forces.

State media later reported that the police were face-to-face with the protesters and the wound was to the back of the head, which meant it could not have been caused by security forces.

A photograph taken by the Reuters news agency clearly shows that Kyal Sin had turned her head shortly before her death. All indications suggest that Kyal Sin was killed by the security forces. This takes the number of anti-coup protesters so far killed to at least 55, according to UN figures.

The growing hunger for information

Since the military took power on February 1, rumors and false reports have been making the rounds, particularly on social media networks such as Facebook, the nation's most important and widely used platform. 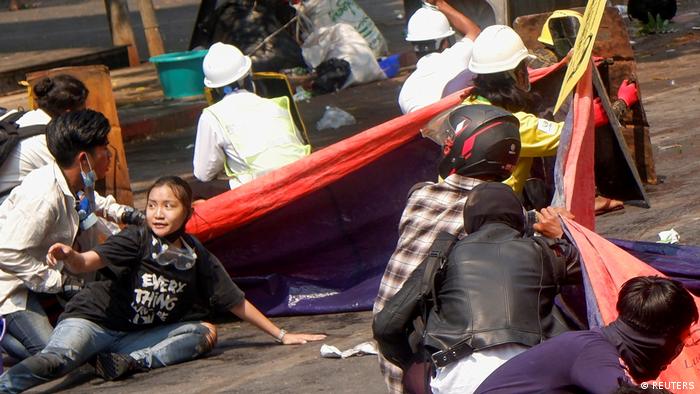 Nineteen-year-old Kyal Sin, bottom-left, took cover before she was shot in the head

Unconfirmed reports and misinformation are spreading, even though Facebook and other networks have been blocked in the country since February 5.

At the same time, people's hunger for information has risen massively, prompting many of them to circumvent official barriers with the help of virtual private networks to know what is going on within the country.

This makes professional reporting and analysis by journalists even more important.

The journalist Kyaw Myint, who served on Myanmar's Press Council for many years before resigning in protest of recent orders by the military government, told DW: "Many journalists are angry, as can be seen on their private social media accounts, but the coverage is by and large professional. Within the country, news and live coverage are organized very efficiently."

Kyaw Myint said he missed background and analysis. "News coverage is very good but reports on the bigger picture and context are lacking," he said.

The journalist added that newspapers' weak financial situation before the coup was compounded by the growing pressure on media after the coup.

At the moment, most of the resources are going into current affairs reporting, Kyaw Myint said.

The work of journalists, which was challenging even before the coup, has become far tougher since the coup.

The military government accuses the media of fueling the protests and making its work more difficult. Security forces have often targeted and attacked journalists reporting on the protests, according to several journalists DW spoke to, but who do not wish to be named for security reasons.

Most editors and reporters in the country currently refrain from identifying themselves as members of the press.

Furthermore, the military has been putting more journalists behind bars. According to the Assistance Association for Political Prisoners (AAPP), an NGO, nearly 1,800 people had been arrested in connection with the coup on Monday, including 34 journalists.

Some of them have since been released on bail, but they face long prison sentences.

Myanmar Journalists Network, a media association, supports colleagues who have been arrested or threatened with legal action.

Kyaw Myint said he had been in contact with lawyers and organizing networks to help families when relatives are detained for months or possibly years.

Many journalists who haven't been arrested yet are being watched, as Kyaw Myint knows from his own experience. Police officers in plainclothes regularly follow him and his wife, who works for the BBC's Burmese service.

Authorities have also been to his home, but only his daughter was there at the time.

Though state-controlled media complied, private media refused, citing Article 19 of the Universal Declaration of Human Rights, which guarantees freedom of expression. In protest of the directives, 20 of the 22 members of the Press Council, including Kyaw Myint, have resigned.

On Monday, the military revoked the licenses of five independent local media outlets: Democratic Voice of Burma, Mizzima, Myanmar Now, 7 Days and Khit Thit. Mizzima announced on Tuesday that it would continue publishing despite the license revocation. Other media outlets, unwilling to bow to pressure from the military or violate the new rules, have stopped publishing for the time being.

The measures, like the coup, signal a return of times that were thought to have been over.

Until 2011, the press in Myanmar was one of the most tightly controlled in the world. There was strict censorship, which was only lifted in 2012.

Private media outlets have been allowed only since 2013.

Until then, the only news available in the country had been approved by the government, and this was done on a weekly basis.

Anyone who wanted to obtain up-to-date and uncensored information had to access outlets such as the Democratic Voice of Burma, the BBC or Radio Free Asia, each of which offered Burmese-language programs.

Now the military is trying to control the internet, as well.

The report published Tuesday by the Open Observatory of Network Interference (OONI) organization shows how extensive the measures are. "The scale of internet censorship in Myanmar has become quite unprecedented," it said.

In addition to the military's blocking of social media, Wikipedia and 174 news sites, the NGO also found the targeted blocking of websites that offer ways to circumvent internet blockades.

Particularly drastic is the daily shutdown of the internet from 1 a.m. to 9 a.m. since February 15. "This synchronization is in stark contrast to the first Internet outage that occurred during the coup on February 1," according to the report. "Since then, it appears that ISPs have developed and refined techniques to enforce and relax the internet connectivity shutdowns according to pre-planned schedules."

Kyaw Myint is confident that there won't be a simple return to the old days, mainly thanks to the internet. "Journalists will defend press freedom by all means," he said. "There is no way back for the military to the pre-2010 era."

A total shutdown of the economy would be the only option, but that's not an option for the military. "The banks, the economy as a whole has long since arrived in the 21st century and is interconnected with the world," Kyaw Myint said. "If the connection is cut, the military would cut its own flesh."

If you experience problems while browsing dw.com from a region where internet access is restricted, consider using the Psiphon application. To add the DW Psiphon app, send an email to dw-w@psiphon3.com for a download link. If you use Psiphon via DW, you will first be redirected to DW's website. From there, you can continue onward to any other website.

Security forces are trying to stifle an ongoing civil disobedience movement aimed at the "full shutdown" of Myanmar's economy following the military takeover of the government.

Police hit demonstrators with rubber bullets and tear gas, after multiple opposition members were reported held in Yangon raids. Meanwhile, China said it hopes to engage with "all parties" to ease the political crisis.

A broad coalition of politicians, civil servants and street protesters have been working hand in hand to reverse the military coup and restore democracy.

Demonstrators have not been put off by security forces, who have escalated an increasingly brutal crackdown.