Six journalists are facing charges punishable with up to three years in prison amid a crackdown on anti-coup protests. 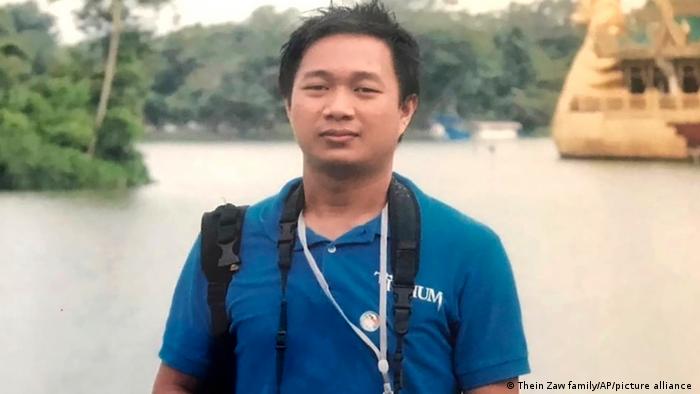 Thein Zaw was arrested while photographing anti-coup protests on Saturday

The Associated Press news agency released a video on Wednesday that showed Myanmar security forces holding an AP journalist in a chokehold and handcuffs as security forces crack down on anti-coup protests.

Myanmar authorities have charged Thein Zaw and five other journalists with violating a public order law, which could put them in prison for up to three years.

"Independent journalists must be allowed to freely and safely report the news without fear of retribution," Ian Phillips, AP vice president for international news, said on Wednesday, calling for Thein Zaw's immediate release.

What did the video show?

In the AP video, Thein Zaw appears to be photographing security forces running at protesters on Saturday in Myanmar's largest city Yangon.

Thein Zaw tries to escape as seven people place him in a chokehold and handcuffs.

A policeman then pulls him with the handcuffs.

What do we know about the charges?

According to AP, Thein Zaw's lawyer said he faces charges under a law that punishes spreading false news, causing fear, or agitating for a criminal offense against public employees.

The junta amended the law last month to increase the penalty from two years and widen its jurisdiction, the lawyer told AP.

AP said that the lawyer confirmed Thein Zaw could be held until March 12 without another hearing.

How did rights groups respond?

International rights groups and activists have called for an end to the crackdown on freedoms in Myanmar.

"Myanmar must not return to the past dark ages where military rulers jailed journalists to stifle and censor news reporting," CPJ said on Twitter, quoting its Southeast Asia Representative Shawn Crispin.

In December 2017, Myanmar arrested two Reuters journalists as they were reporting on Myanmar's Rohingya minority.

They were freed in 2019 with a presidential pardon after a court sentenced them to seven years in prison.

What is happening in Myanmar?

Since last month, protesters have marched against a coup that ousted Aung San Suu Kyi's elected government on February 1.

Security forces have cracked down on the peaceful demonstrations, killing dozens and arresting protesters en masse.

Activists vowed to hold more nationwide protests on Thursday, according to Reuters.