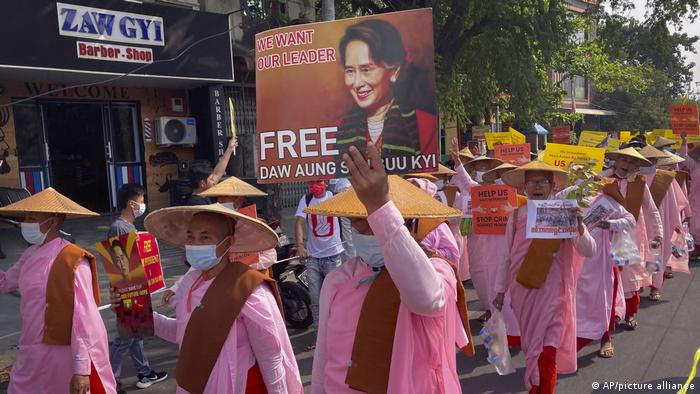 Suu Kyi appeared in the video from court on Monday looking healthy but facing new charges from the military junta.

The appearance came after the bloodiest day so far since the military staged its coup last month.

What charges is Suu Kyi facing?

One of the latest charges was over the publication of information that may "cause fear or alarm." The other was under a telecommunications law requiring licenses for equipment, her lawyer said.

The 75-year-old is facing various charges about which the international community has expressed widespread skepticism.

Suu Kyi was taken into custody on February 1 when Myanmar's military staged a coup against her civilian government.

One of Suu Kyi's lawyers said her next hearing would be on March 15.

Meanwhile on Monday, supporters marched in several towns and cities in defiance at the crackdown and the worst day of violence so far under the new regime.

On Sunday, police opened fire and made mass arrests to break up demonstrations. A UN human rights official said it had "credible information" indicating that at least 18 were killed and a further 30 wounded.

The number of fatalities would be the highest single-day death toll among protesters since Suu Kyi was ousted in a February 1 coup. Some 1,000 individuals are also believed to have been detained on Sunday.

Suu Kyi was detained in Naypyitaw, an isolated city that the military built as its capital during a previous dictatorship, before dawn on the day of the coup. Until today, she had not been since in public since being ousted, but was reportedly being kept under house arrest.

The military has sought to justify its takeover, which brought to an end a decade-long flirtation with  democracy, by making unfounded allegations of widespread fraud in national elections last November.

In the vote, Suu Kyi's National League for Democracy swept to victory in a landslide win.

Members of the G7 have called for an end to the "intimidation and oppression of those opposing the coup" staged by Myanmar's military in early February. Three people have been killed in protests opposing the takeover.