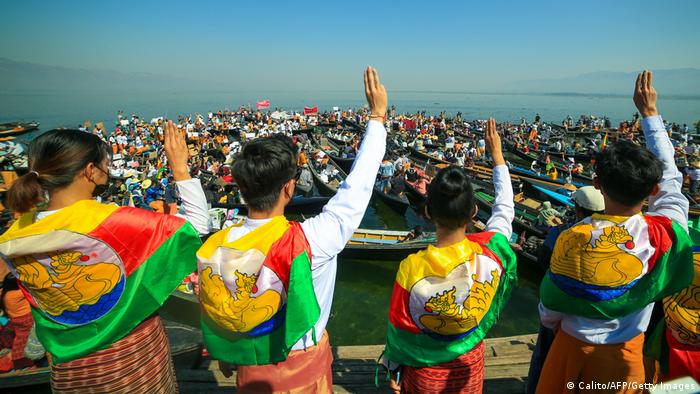 Members of the Shan ethnic minority hold an anti-coup demonstration

Three weeks after Myanmar's military coup, protests in cities around the country are growing larger than ever before and have spread to the capital cities of provinces with significant ethnic minority populations.

Thousands of flag-waving demonstrators took to the streets of Lashio in the eastern Shan state, Myitkyina in Kachin state to the north, or Hpa-An in the southeastern Kayin state.

Leaders of Myanmar's different ethnic groups that are supporting resistance against the military leadership also support the civil disobedience movement, under which public servants, health care and transportation workers are striking around the country.

Who are Myanmar's minorities?

Myanmar's minorities together make up about one-third of the country's 54 million inhabitants.

They live primarily in border areas that form a horseshoe around the fertile rice fields of Myanmar's heartland, which is dominated by the Bamar ethnic majority. For decades, some of these groups have been fighting for more autonomy.

There are at least 21 of these armed groups, along with countless militias. These minority armies are not only fighting against the central government, but in some cases against each other.

Disputes over political and economic participation of different ethnic groups have characterized Myanmar since its independence in 1948. The result has been an ongoing civil war that has flared up again and again for 70 years.

According to a study by the Asia Foundation, around one in four of Myanmar's people was affected by violent conflicts in 2017.

Myanmar's military, known as the Tatmadaw, has always feared an alliance between ethnic minority groups and the civilian opposition led by Aung San Suu Kyi. 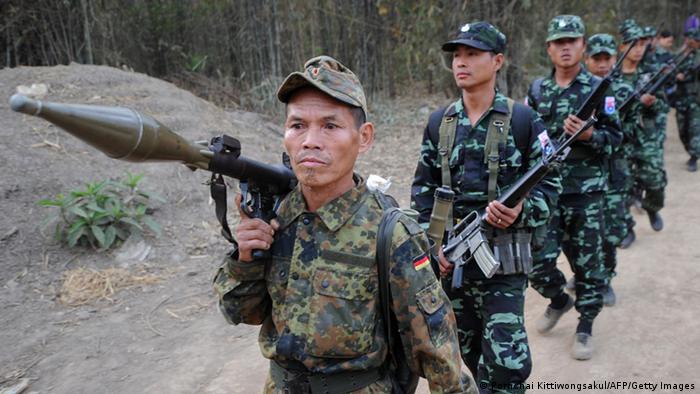 On the day of the coup, Myanmar's generals made an offer to paramilitary organizations to suspend all military operations until February 28 and continue a peace dialogue.

The offer was rejected by several important players, including the so-called Peace Process Steering Team (PPST). The PPST stated, among other things, that it supports the civil disobedience campaign.

A deciding factor moving forward will be how robust the solidarity is between these ethnic minority groups and the anti-coup protest movement.

Saw Kapi, director of the Myanmar think tank Salween Institute for Public Policy, said at a recent digital event that the demonstrators and the ethnic minorities are united right now in opposing the military, but differ in what they want for the future: The "Generation Z"-led protest movementwants democracy and ethnic minorities seek autonomy.

At the moment, the principle of "the enemy of my enemy is my friend " applies, as both groups reject military rule. However, there is less unity on the question of who should govern Myanmar. 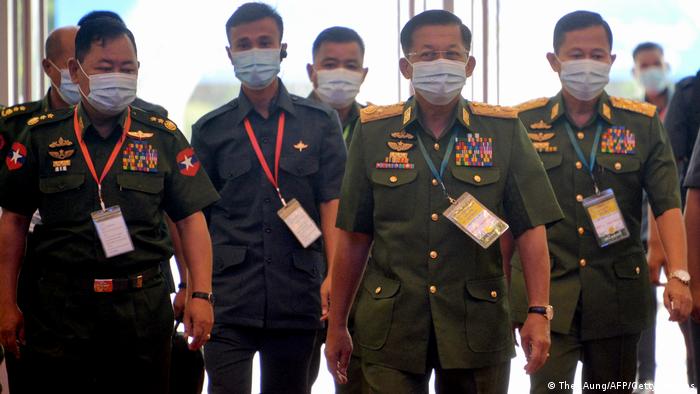 The Tatmadaw's leadership worries about its political opponents forming alliances

This is evident in the assessment of Suu Kyi, whose likeness is displayed on many protest signs in Yangon or Mandalay.

However, whether the Tatmadaw governs with or without Aung San Suu Kyi's National League for Democracy (NLD) makes little difference to minorities.

Minority groups' hopes that a process of reconciliation and political negotiations on power-sharing would begin with a civilian NLD government were dashed after 2015.

"They had so little positive experience with the NLD government. The NLD's inability to make any progress in the peace process has frustrated many people," he said.

Myanmar's ethnic conflicts are largely centered on the issue of federalism. However, defining federalism has always been controversial in Myanmar.

Until 2014, the military suppressed any discussion in which the word federalism was even mentioned, because it was understood to mean separatism.

"The details of a future federal state remain unclear and the discussion revolving around these details have produced deep-rooted contention that ultimately has led to a deadlock in current peace negotiations," wrote Michael Siegner in a recent study on Myanmar's peace process for the Hanns Seidel Foundation.

Ashley South also said the NLD's position so far has been much closer to that of the military than that of the ethnic minorities.

The influential paramilitary group Restoration Council of Shan State (RCSS), said it would support the people in protecting a democratic transition and establishing a federal union, according to reports in the English-language newspaper The Irrawady.

For the paramilitary army from Shan state, along with other armed groups, the most important issue for the future is more autonomy for their minority groups, and not a return to democracy under Suu Kyi.

Can NLD-supporters and minorities work together?

Ethnic groups and pro-democracy supporters are also still wary of trusting one another.

"The big problem is not about right and wrong it is also about trust… The trust has been badly shaken. 'If they can do it to each other, they can also do it to us,'" Khuensai Jaiyen from the Peace Process Steering Team told a workshop at Chiang Mai University in Thailand.

By "them," Jaiyen means the ethnic-majority Bamar, who are in charge both in the military and in the NLD; by "us," he means the ethnic minority groups. The distinction between "us" and "them" is still dominant.

Nevertheless, according to Myanmar expert South, there is a real chance to challenge the powerful institution of the military.

"The Tatmadaw does respect the power of numbers," South said.

"If there is a powerful enough coalition, then I think just realpolitik will ensure at least that the Myanmar army leadership takes it seriously and perhaps feels they have little choice other than to negotiate," he added.

Conversely, this also means that if the military successfully divides the protest movement and the ethnic groups, as it has in the past, it could gain the upper hand.