A Nobel Peace Prize laureate whose political rise gave hope for democracy in Myanmar, Aung San Suu Kyi has been considered both a savior and a disappointment. 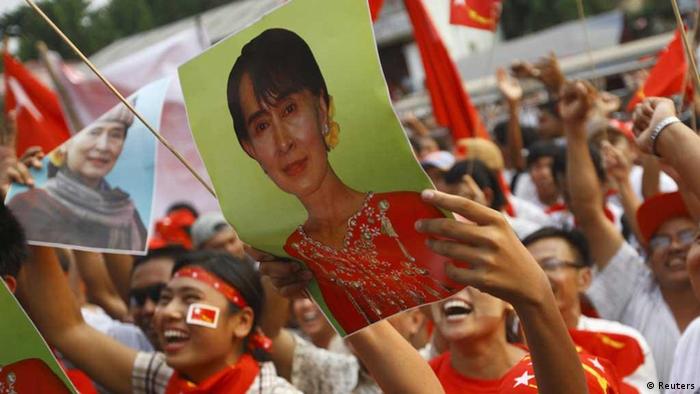 Aung San Suu Kyi has been the most visible and polarizing political figure in Myanmar's modern history.

Formerly venerated as a Nobel Peace Prize laureate, human rights icon and champion of democracy, Suu Kyi has been vilified more recently as an accomplice of Myanmar's military in the expulsion and genocide of the Muslim Rohingya minority.

It is therefore rather ironic that Suu Kyi ended up being detained by the military and removed from her position as state counselor on Monday.

Suu Kyi was born shortly before the end of World War II on June 19, 1945. She is the daughter of Aung San, a hero of Burmese independence.

Aung San is widely considered the founding father of Myanmar and its military, known as the Tatmadaw. He was assassinated in 1947 before his country, then called Burma, gained his independence from the British Empire in 1948.

A political rise born in protest

Suu Kyi had always said it was her duty to serve her country and its people. However, she didn't enter politics until 1988, when she was 43 years old. By then, she had raised two sons and was working as an academic abroad.

At that time, a student-led protest movement was challenging the country's socialist one-party regime. However, the movement lacked a personality that could unite all of the country's opposition forces against the government. Upon her return to her home country, the students turned to Suu Kyi — and she took the lead without hesitation.

In August 1988, she launched her political rise with a speech in front of an estimated 500,000 people at the Shwedagon Pagoda, an iconic golden Buddhist temple in Yangon. In the speech, Suu Kyi built on her father's legacy and called for a "second struggle for national independence."

The speech turned Suu Kyi into the country's most popular political figure. However, the spirit of optimism wouldn't last long.

A month after Suu Kyi's speech, Myanmar's military put down the popular uprising and took over the government, promising a new election and a multiparty system. Thousands of people were killed. In 1989, the military government changed the English translation of the country's name to Myanmar.

Shortly after the coup, Suu Kyi founded the pro-democracy political party, the National League for Democracy (NLD). An election promised by the military went ahead in 1990, and NLD candidates surprisingly won more than four-fifths of all parliamentary seats. For many of Myanmar's people, Suu Kyi embodied the Buddhist ideal of a moral and spiritual leader, and this helped the NLD win at the polls.

However, the election results were never put into place. Instead, Suu Kyi was placed under house arrest. Between July 1989 and November 2010, she was mostly isolated to her home in the main city of Yangon.

Suu Kyi was awarded the Nobel Peace Prize in 1990, and her two sons accepted on her behalf. She donated the $1.3 million in prize money to health and education programs in Myanmar.

The award also drew international attention to Myanmar and placed Suu Kyi on a pedestal as a symbol of human rights and democracy. While she was under house arrest, she devoted herself to Mahatma Gandhi's philosophy of non-violence, while preaching "freedom from fear." In books, movies, and pop music, Suu Kyi became an international human rights icon.

However, she paid a high price for her "celebrity" status and was kept isolated. When her British husband, Michael Aris, was dying of cancer in 1999, the military refused to let him enter Myanmar. Authorities said Suu Kyi could travel to London instead. She refused, knowing full well she would never be allowed to return and continue her fight for democracy.

Reform and return to democracy

For years, Suu Kyi, the NLD and the military were in a stalemate. She couldn't turn her popularity and moral capital into political power, and the military couldn't succeed in improving its image from that of a power-hungry dictatorship.

Following elections in 2010, the former General Thein Sein became president of Myanmar and announced a comprehensive reform program and the opening of the country.

Suu Kyi was released from house arrest, and faced a decision to either refuse to participate in politics under the strict limitations imposed by the military, or make her return according to their rules.

She decided to participate in the political process, a move which went against the principles of those opposed to the military.

"I am always surprised when people talk as if I have just recently become a politician," she told her astonished critics. "I set out to be involved in politics, and not as a defender of human rights or as a human rights activist."

The NLD won a sweeping victory in Myanmar's 2015 general election. Suu Kyi was constitutionally prohibited from being president because her husband was from the UK. She assumed the title of "state counselor," a role which was created especially for her that roughly corresponds to that of prime minister.

Media from around the world reported rather unanimously that democracy had finally triumphed in Myanmar.

Rohingya, genocide and fall from grace

However, it didn't take long for the jubilation to subside. Myanmar continues to be beset by deep ethnic tensions and a hobbled peace process to end ongoing civil conflict.

This process took a huge blow in October 2016 and August 2017 in Myanmar's western Rakhine state, where an Islamic militant group, the Arakan Rohingya Salvation Army (ARSA), attacked Tatmadaw forces stationed in the region.

The army responded with disproportionate force against the Rohingya, a Muslim-minority group from the region. More than 700,000 Rohingya fled to neighboring Bangladesh, and reports soon emerged of burned villages and massacres carried out by Myanmar's military. The UN called the events a "textbook case of ethnic cleansing."

Suu Kyi's belated and restrained comments on the Rohingya turned her into an accomplice of the Tatmadaw for many human rights activists and former supporters, as she refused to directly condemn the actions of the military.

Rohingya refugees yet to return to Myanmar

In the following months and years, she was stripped of many honors and prizes, including a human rights prize from Amnesty International.

In December 2019, Suu Kyi surprised the world again when she personally represented Myanmar before the International Court of Justice (ICJ) to defend the country on genocide charges.

Her appearance before the ICJ, where she denied that the Tatmadaw had any intention of wiping out the Rohingya in whole or in part, only added to the considerable damage done to her international image.

However, in Myanmar, the opposite effect was observed. Many people rallied behind "Mother Suu" and the military. The former opponents had become allies.

In November 2020, the NLD and Suu Kyi won another landslide victory in Myanmar's general election. The military-backed Union Solidarity and Development Party (USDP) objected to the results and demanded a new vote as soon as possible "in order to have an election that is free, fair, unbiased and free from unfair campaigning." Nearly three months later, Suu Kyi's government collapsed in a military coup.

Suu Kyi's time in politics has been full of contradictions, surprising twists and disappointed expectations. But it would be fair to say she has had little control over the major events that have shaped her life. After Monday's military takeover, once again, the role Suu Kyi could play in the future seems to be out of her hands.

In The Hague, Myanmar's government claims that actions taken against the Rohingya minority were necessary. Maybe the trial will soften the government's stance and that of the prosecutors, DW's Rodion Ebbighausen writes.