In The Hague, Myanmar's government claims that actions taken against the Rohingya minority were necessary. Maybe the trial will soften the government's stance and that of the prosecutors, DW's Rodion Ebbighausen writes. 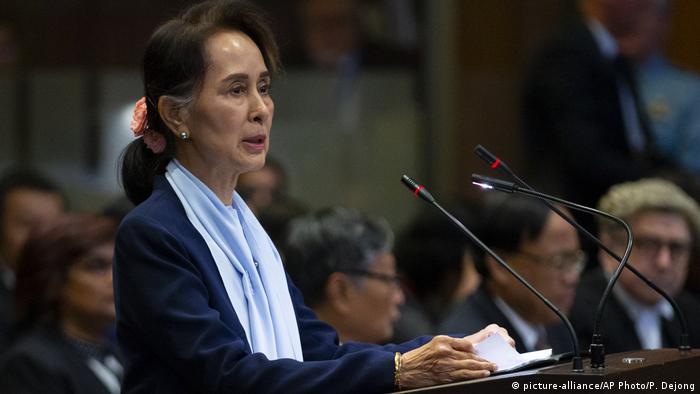 Two days of hearings at the UN's International Court of Justice in The Hague have come to an end. Gambia, the complainant in the case, and Myanmar were given opportunity to present their view on whether the latter has committed a genocide against the Muslim Rohingya. The court will determine whether to initiate preliminary security measure to protect the ethnic group. A decision is expected in the coming weeks. A trial to determine whether Myanmar's government is guilty of genocide will most likely take years to conclude.

These first days of the trial reflect everything that has gone awry politically these past years. Representatives of Gambia, which brought the case against Myanmar, seem to regard themselves as morally superior. Abubacarr Marie Tambadou even cited a quote often attributed to Edmund Burke: "The only thing necessary for the triumph of evil is for good men to do nothing." Gambian officials have no doubt that Myanmar has committed and continues to commit a genocide against the Rohingya and that the minority is at acute risk. In arguing the case, Gambian officials have largely relied on a comprehensive fact-finding report by the UN.

Myanmar's leader, Aung San Suu Kyi (pictured), rejects the charges. She said the situation in Rakhine state was complex and argued that Gambian officials are painting an "incomplete and incorrect" picture. She did concede that "it cannot be ruled out that disproportionate force was used by members of the defense services in some cases in disregard of international humanitarian law." She said soldiers who had done so "will be prosecuted." Yet her assertion is hard to take seriously. The only domestic effort to put soldiers on trial led to a pardon. Officials in Myanmar are convinced that they are being unfairly treated as the result of international ignorance.

Myanmar will not be let off the hook simply by calling the flight of 700,000 Rohingya an unintended consequence of the government's effort to quell an uprising. It will be tough for Gambia to make the case that Myanmar has committed genocide purely by relying on the UN report. Genocide, according to international law, is a very specific crime. Gambia would have to prove that Myanmar had the intent to annihilate parts of or the entire Rohingya community. But, as this intent cannot be inferred from any official documents or statements by officials from Myanmar, it must be indirectly inferred from events that transpired in Rakhine state. And, to make a plausible case, Gambia must show that the only explanation for these events was that Myanmar planned a genocide. UN documents indicate that Myanmar's government and army may have intended to carry out an ethnic cleansing, rather than a genocide.

One lawyer representing Myanmar even highlighted that a trial being prepared at the International Criminal Court accuses the country of committing crimes against humanity, war crimes and ethnic cleansing. He was implying that if Myanmar is accused of ethnic cleansing, it can hardly be responsible for genocide, as well. It might, in fact, be possible for the country to avoid prosecution at the ICJ, simply because the government's actions do not meet the strict legal definition of genocide. But the reference to ethnic cleansing indicates that Myanmar will have to take some accountability for the events in Rakhine state.

Neither Gambia's moralistic accusations nor Myanmar's disingenuous claims of innocence will work do anything for the Rohingya, who are the ones paying the price for all this: What they need is genuine dialogue and real solutions.

China says military drills around Taiwan will continue 3h ago