Gambia has lodged a grievance with the United Nations' top court, calling for an end to genocide in Myanmar. The Southeast Asian country is accused of using rape and murder to persecute its Rohingya Muslim minority. 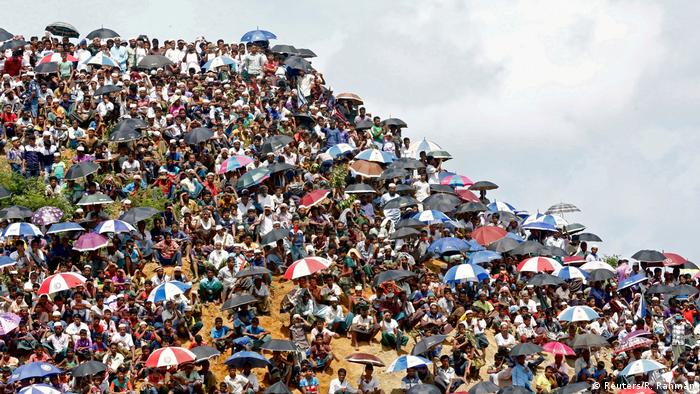 Gambia filed a case on Monday accusing Myanmar of genocide against its Muslim-minority Rohingya people.

In a statement, lawyers for the Gambian government urged the International Court of Justice (ICJ) to order measures to "stop Myanmar's genocidal conduct immediately."

The country filed the case on behalf of the Organization of Islamic Cooperation.

The Myanmar military launched a counterinsurgency operation in 2017, after an insurgent attack. The campaign targeted Rohingya areas, and allegedly saw atrocities committed against civilians who were driven from their homes.

Are militants tightening grip on Rohingya?

More than 700,000 Rohingya fled to neighboring Bangladesh, with claims that they were forced out through the use of mass rapes, killings and burning of their homes.

Gambia's statement alleges that "killing, causing serious bodily and mental harm, inflicting conditions that are calculated to bring about physical destruction, imposing measures to prevent births, and forcible transfers, are genocidal in character because they are intended to destroy the Rohingya group in whole or in part."

Gambia's Justice Minister Abubacarr Marie Tambadou said the action was being taken to "uphold and strengthen the global norm against genocide that is binding upon all states."

Risk of return to genocide

The head of a UN fact-finding mission on Myanmar last month warned of a "serious risk of genocide recurring."

In response, Myanmar's UN ambassador, Hau Do Suan, claimed that the UN mission had been one-sided and "based on misleading information and secondary sources." He said the Myanmar government — a signatory of the 1948 Genocide Convention — took accountability seriously. The convention compels signatory states to prevent and punish genocide.

Prosecutors at the International Criminal Court (ICC) in July asked its own judge for permission to open a formal investigation into the alleged crimes against humanity in Myanmar.

The ICJ rules on disputes between nations, while the ICC rules on crimes allegedly committed by individuals.

In 2017, a Rohingya militant group attacked several police posts in Myanmar. As the army responded with brutal force, thousands of Rohingya fled to Bangladesh. Today, the militants threaten those who dare to defy them. (24.09.2019)