Some 3,450 Rohingya refugees were due to be sent back to Myanmar from Bangladesh, but none appeared at the repatriation center. The UN has confirmed that abuse tantamount to genocide had occurred in Myanmar. 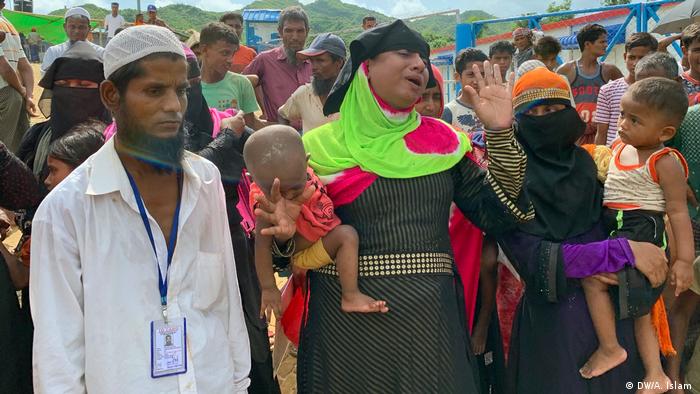 A second attempt at convincing Rohingya refugees to return to Myanmar from camps in southeastern Bangladesh failed on Thursday as those listed to return did not appear for their repatriation, an official said.

A similar attempt fell flat in November as the refugees highlighted security concerns in Myanmar.

Bangladesh and Myanmar agreed to begin returning refugees in an effort to revive a repatriation deal from 2017.

The two sides started the process after Myanmar cleared 3,450 people to return from a group of more than 22,000 refugees submitted by Bangladeshi authorities.

DW's Naomi Conrad had earlier on Thursday tweeted: "Today, voluntary repatriation of Rohingya refugees is set to start from three camps. It's unclear how many — if any — have agreed to return to Myanmar. For now, all seems calm."

However, no Rohingya Muslims appeared at the makeshift center, where the refugees were expected to convene before traveling to the border, as Myanmar officials waited on the other side, according to Khalid Hossain, a refugee repatriation official.

Conrad said Myanmar officials would not respond to DW's questions regarding refugees' rights.

More than 730,000 Rohingya Muslims fled Myanmar headed for Bangladesh in August 2017 after a brutal military clampdown.

Myanmar denied any wrongdoing and said the militant actions across hundreds of villages in northern Rakhine was in response to attacks by Rohingya insurgents.

However, a United Nations report released on Thursday contradicted those claims. It stated that sexual violence was committed by Myanmar troops against Rohingya women and girls. The investigation concluded that it was an indication of the military's genocidal intent to destroy the mainly Muslim ethnic minority.

A UN independent panel of investigators, after two years of research, confirmed that Myanmar's government failed to hold anyone accountable and said it was responsible "under the Genocide Convention for its failure to investigate and punish acts of genocide."

The report added: "Hundreds of Rohingya women and girls were raped, with 80 percent of the rapes corroborated by the Mission being gang rapes. The Tatmadaw (Myanmar military) was responsible for 82 percent of these gang rapes."

The Myanmar government refused entry to the Human Rights investigators. As a result, they traveled to refugee camps in Bangladesh, Thailand and Malaysia, where they met with aid groups, think-tanks, academics and intergovernmental organizations, in order to compile their report.

The Geneva Conventions, the foundation of international humanitarian law, were adopted 70 years ago in the aftermath of World War II. With the changing nature of warfare and modern challenges, are they still relevant? (12.08.2019)