Rohingya militants active in Bangladeshi refugee camps | Asia | An in-depth look at news from across the continent | DW | 24.09.2019

In 2017, a Rohingya militant group attacked several police posts in Myanmar. As the army responded with brutal force, thousands of Rohingya fled to Bangladesh. Today, the militants threaten those who dare to defy them.

As night fell, the alleyways meandering through the world's largest refugee camp were almost deserted. Two men clutching torches, their light flickering on the wet and muddy ground, scurried through the rain and disappeared into the shadows. A dog barked in the distance, while music and muffled voices drifted from one of the countless tiny huts made of corrugated iron, bamboo and tarpaulin.

Young men sheltered in doorways, staring out into the shadows. They were Rohingya watchmen on the lookout for criminal gangs. For at night, when a government-imposed curfew sends the many aid workers back to their hotels and lodgings, security is tense. DW has heard tales of murders, abduction and rape.

Murder in the Rohingya camps

One evening in late August, a local source took DW to meet a woman whose husband was killed nearby. As the source stood guard outside her hut, the woman clutched a young child, while another stared at his mother from behind the curtain that divided the tiny space into two minuscule rooms. One single plastic toy lay on the bed, a single thin mattress that took up half of the room.

As the rain drummed on the roof, she whispered so her neighbors wouldn't hear the hurried conversation. Her husband, she said, had worked for the good of the Rohingya. "He wanted to stop misconduct in the camps."

DW knows the identity of both the woman and her husband. But because she fears she is being watched, DW has chosen not to reveal his name or position within the camp. But one thing is clear: His actions seem to have angered a powerful group operating with near-impunity.

ARSA active in the camps

Those who killed him, she said, belonged to Harakah al-Yaqin — the former name of a group of Rohingya militants, which in 2016 renamed themselves ARSA, or Arakan Rohingya Salvation Army. Led by a small cadre of Rohingya emigres from Saudi Arabia and Pakistan, the group wants self-governance for the Rohingya, an impoverished Muslim minority that has long been denied full citizenship in Buddhist-majority Myanmar. Most Rohingya live in Rakhine, the poorest state in an impoverished country, and need special permits to travel and marry.

ARSA made international headlines when it launched a coordinated attack on 30 border guard police posts and an army base in Rakhine state in Myanmar in August 2017, killing 12 members of the security forces according to government officials. This followed previous attacks on police posts in late 2016. The attacks marked a major escalation in a simmering conflict and triggered a large-scale and violent army offensive.

The Tatmadaw, as the army is called, responded with a scorched earth tactic, burning and bombing villages. In September 2017, the UN human rights chief labelled the crackdown a "textbook example of ethnic cleansing." More than 730,000 Rohingya fled the country to neighboring Bangladesh, crossing the Naf border river that separates Myanmar and Bangladesh in boats, floats and on foot.

Bangladesh welcomed the refugees, settling them in crowded, makeshift camps that the authorities built close to the border. Together, they make up the world's largest refugee camp. Among the refugees were members of the group whose actions had escalated the deadly violence in the first place: ARSA militants.

Off the record, aid workers told DW that while they could not say for sure, given the curfew, "conservative groups" seemed to have imposed a strict rule on the Rohingya living on the camp.

One foreign aid worker told DW that several women who were working for aid agencies had been threatened. Many were so scared, he said, that they had chosen to give up their source of minimal income, rather than risk the group's wrath. Others told DW that women who were deemed not to be dressed modestly enough had been targeted.

It is likely that many groups are active in the camps and that, while some of them may have chosen to take on the label of the militant group, some may just be opportunistic criminals. And the camps are located along a route used for the international drug trade of yaba, as methamphetamine is known locally. Criminal gangs operate in the area and shootouts with the police are a common occurrence.

The government of Bangladesh, for one, claims that there is no ARSA presence in the camps. In the capital, Dhaka, Bangladesh's foreign minister Abul Kalam Abdul Momen was adamant: "There is no ARSA in Bangladesh. There is in Myanmar, not here. If there is any, we will pick him up, or her up, and we will send that individual to Myanmar."

But in the camps, ARSA is a name that quickly ends conversations, leading to monosyllabic, nervous answers. The group allegedly has informers in every camp, including children. It is a claim DW was unable to verify, but even the fear of an all-pervasive network of informers is enough to silence many. It is thus impossible to gauge the group's level of support.

ARSA militant: 'We're here to help you take control of your land'

After weeks of trying, a contact managed to arrange a meeting with a man who claimed to be a member of ARSA. DW could not independently verify the man's identity and story, but his account does match with other accounts of the group's recruitment, training and actions in the camps.

DW met him — a tall, physically fit man in his mid-thirties — in a secluded spot outside of the camps. Throughout the interview, he nervously scanned the surroundings, clutching his mobile phone in one hand, while twisting blades of grass with the other.

The man said he took the oath to join ARSA in 2017, shortly before the attacks that triggered the army crackdown and mass exodus. Several men came to his village, he said, and asked the men if they wanted freedom: "They said: 'You don't have any rights in your own country. We are here to help you to take control of your land. If you agree with us, come and join us.'"

The individuals who recruited the villagers, the man confirmed to DW, were ethnic Rohingya men from Saudi Arabia and Pakistan. He said he received basic military training, including how to use rifles and plant roadside bombs.

Like him, several hundred villagers joined the group starting in 2014, according to an account by the International Crisis Group (ICG), an international nongovernmental organization.

According to the ICG, ARSA was founded by a small cadre of Rohingya based in Saudi Arabia. The leader is reportedly Ata Ullah, a Rohingya who was born in Pakistan to refugee parents, but whose family moved to Saudi Arabia when he was still young. There, he was reportedly educated in a madrassa, an Islamic school. 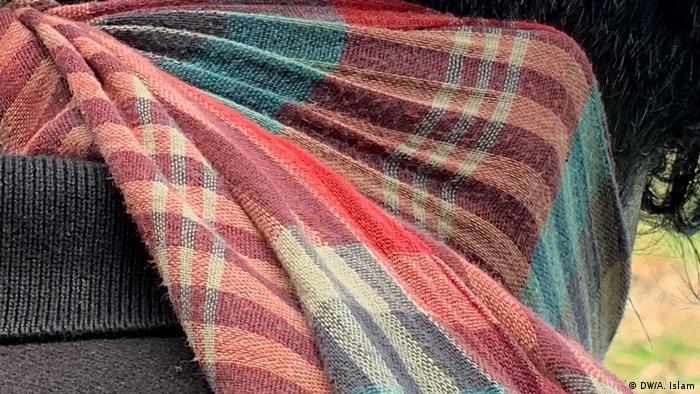 ARSA militant: "I want to fight in Myanmar"

Ata Ullah and the group's leadership are alleged to have received military training by the Pakistani Taliban (TTP). According to the ICG, a small group of commanders, seemingly with prior experience in guerrilla warfare gained in Afghanistan and Pakistan, are leading the operations in Myanmar.

A spokesman for the TTP confirmed to DW that Taliban fighters had trained Rohingya Muslims in the past. They had, he said, made a request that TTP could not ignore.

The militant DW interviewed said the group's aim was independence for the Rohingya. "ARSA wants to make sure that everyone has a good life." But he was unsure what that meant exactly, other than a strict interpretation of Islam. His commander, he said, had instructed fighters to hit women who were not covered enough. "If we see a woman wearing a burka incorrectly and if we see her arms, we can hit her." 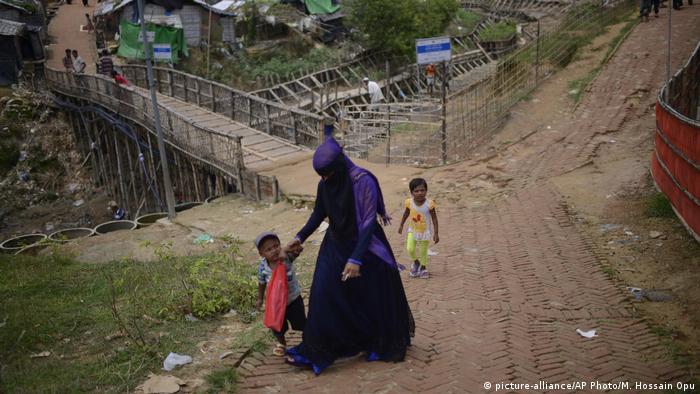 Women who are not dressed "modestly enough" risk the group's wrath

The man told DW that ARSA killed those they deemed to be informants and sometimes kidnapped people for ransom. But he said he disagreed strongly with the murders in the camp. "If we cause trouble and kill people here, the government of Bangladesh will also start killing us."

Rather, he said, ARSA should concentrate on its fight in Myanmar. He told DW that some 3,500 fighters were sheltering in the refugee camps — and that groups of several hundred fighters secretly crossed to neighboring Myanmar for military training. But, he conceded, there was little scope for any large-scale attacks, given that the group lacked weapons and ammunition. "Nobody gives us support," he said.

"If we get enough support and ammunition, we can kill the army over there," he said, referring to the Tatmadaw. But for now, he conceded, that was wishful thinking.

Suddenly, his small mobile phone began to ring. He became agitated, struggling to remove the battery from his phone. Someone, he said, might have seen him — and "now I am getting a call."

Then, he started to cry. He stared at the phone and battery in his hand. Finally, he looked up: "Don't publish my picture, otherwise, they will kill me, too."

Opinion: Foreign aid is a hindrance to Rohingya repatriation

Local and international NGOs have been working hard to provide relief to Rohingya refugees in Bangladesh. But their efforts are proving to be counterproductive in repatriation attempts, says DW's Khaled Muhiuddin. (25.08.2019)

UN: Attacks in Myanmar's Rakhine state could be 'war crimes'

The UN has said it has "credible reports" of recent Rohingya civilian deaths and abductions at the hands of Myanmar's military in the state of Rakhine. The UN said the attacks "may constitute war crimes." (06.04.2019)

Nearly 3,500 Rohingya living in Bangladesh fear for their lives after being told they would be sent back to Myanmar. DW's Naomi Conrad and Arafatul Islam spoke to them at their shelters in Cox's Bazar. (21.08.2019)