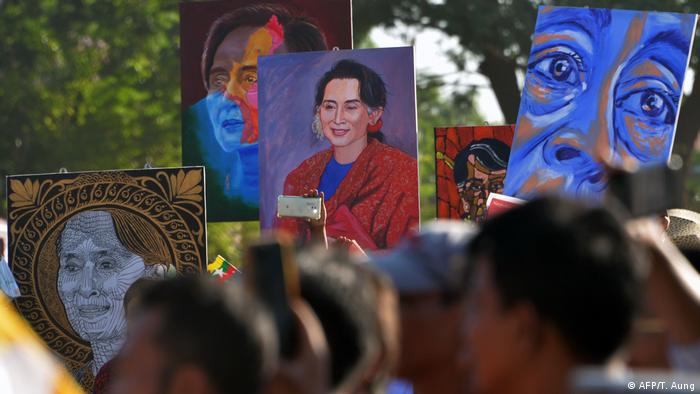 Myanmar's civilian leader Aung San Suu Kyi appeared at the United Nations International Court of Justice in The Hague on Tuesday, to defend her country's military from allegations of committing genocide against the Rohingya minority.

Suu Kyi watched the proceedings on Tuesday without any show of emotion as a legal team for Gambia detailed accounts of atrocities allegedly perpetrated by Myanmar military personnel in western Rakhine state. They are accused of committing crimes including killings, sexual violence and the destruction of tens of thousands of Muslim minority homes in the state.

Acting on behalf of the 57-country Organization of Islamic Cooperation, the Gambia is asking the world court to take "all measures within its power to prevent all acts that amount to or contribute to the crime of genocide.''

Opening its case, the Gambia's Justice Minister Aboubacarr Tambadou urged the court to "tell Myanmar to stop these senseless killings, to stop these acts of barbarity that continue to shock our collective conscience, to stop this genocide of its own people.''

More than 730,000 Rohingya fled the coastal state of Rakhine after the military launched its crackdown in 2017 and were forced into squalid camps across the border in Bangladesh.

Myanmar has previously denied almost all allegations leveled against its troops.

What will Suu Kyi say?

Suu Kyi, who is leading the Myanmar delegation in her capacity as foreign minister, is expected to address the court on Wednesday and defend the actions of the Myanmar military. She will likely argue that military "clearance operations" launched in August 2017 were a legitimate counterterrorism response to attacks by Rohingya militants.

Suu Kyi defending the Myanmar military in an international court would be a remarkable scene, given that she herself spent 15 years under military-ordered house arrest.

Suu Kyi was once seen as a shining light for democracy and a global beacon of hope for human rights. She was awarded the 1991 Nobel Peace Prize for championing democracy and rights under Myanmar's then-ruling junta. But her silence over the plight of the Rohingya has tarnished her reputation in the West.

In Myanmar, however, many have rallied in recent days to show support for her. Suu Kyi's decision to personally lead the country's case at the court has also proved popular at home. On Tuesday, flag-waving supporters joined rallies in support of Suu Kyi in several cities across the country, with some 2,000 people marching through Yangon and tens of thousands more in Mandalay.

"We have to stand behind her as she travels to defend our country's dignity," said 57-year-old Yangon resident Thant Zin, sporting Suu Kyi stickers on both cheeks.

The Gambia's lawyers said the appearance of huge billboards across Myanmar in recent weeks featuring pictures of Suu Kyi with three smiling generals showed she was "in it together" with the army that once held her captive. "It can only be intended to show that they are all in it together and that Myanmar has absolutely no intention of holding its emboldened military leadership accountable," lawyer Paul Reichler told the court.

This week's proceedings, before a panel of 17 judges, will not deal with whether Myanmar is guilty of the most serious international crime, but will focus on the Gambia's request for provisional measures. A decision on that request is expected within weeks. The tribunal has no enforcement powers. Still, its rulings are final and have considerable legal weight.

Separately, the US on Tuesday imposed sanctions on four Myanmar military generals, including the commander-in-chief Min Aung Hlaing, in the toughest action taken yet by Washington following the alleged human rights abuses against the Rohingya. The sanctions freeze any US assets held by those targeted and prohibits Americans from doing business with them.

The 1948 act, signed into international law after the Nazi Holocaust, defines genocide as committing any of the following against a national, ethnic, racial or religious group:

These current proceedings are only the third genocide case filed at the court since World War II.

ICC approves probe into violence against Rohingya in Myanmar

The war crimes court said violence committed against Myanmar's Muslim minority could qualify as "crimes against humanity." Over 700,000 Rohingya fled to Bangladesh in 2017 to escape a brutal military crackdown. (14.11.2019)