The sanctions represent the strongest step that the US has taken in response to massacres in Myanmar. Recent reports have pointed to the military's role in enabling violence against the minority Muslim group. 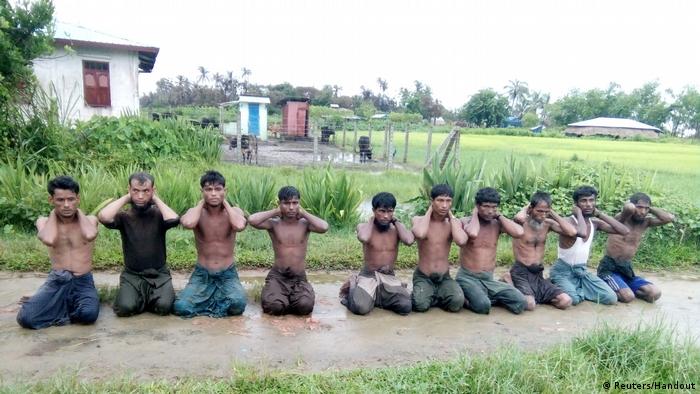 The US State Department announced on Tuesday that it would sanction Myanmar's army chief Min Aung Hlaing and other members of the military for their involvement in violence that caused 740,000 Rohingya to flee across the border to Bangladesh last year.

"We remain concerned that the Burmese government has taken no actions to hold accountable those responsible for human rights violations and abuses," Secretary of State Mike Pompeo said in a statement.

"There are continued reports of the Burmese military committing human rights violations and abuses throughout the country," he added.

A Buddhist-majority country, Myanmar, once known as Burma, has refused to grant the mostly Muslim Rohingya community citizenship or basic rights.

Read more: Myanmar's democracy is letting down a young generation

Pompeo referred to a recent disclosure that Min Aung Hlaing had ordered the release of soldiers convicted of extrajudicial killings at the village of Inn Din during the ethnic cleansing of Rohingya in 2017.

This was "one egregious example of the continued and severe lack of accountability for the military and its senior leadership," he said.

The Inn Din massacre was uncovered by two Reuters journalists, Wa Lone and Kyaw Soe Oo. They spent 16 months behind bars on charges of obtaining state secrets as a result of their reporting. The two were released in an amnesty on May 6.

The Nobel laureate has drawn criticism from Western admirers for not speaking out about the abuses.

A State Department study released last year said the violence against Rohingya, which has included rape and the burning of villages, has been "extreme, large-scale, widespread and seemingly geared toward both terrorizing the population and driving out the Rohingya residents."

As monsoon season begins in Bangladesh, Rohingya refugees are working with humanitarian agencies to fortify the flood-prone terrain where they have taken refuge. Diego Cupolo reports from Cox's Bazar, Bangladesh. (31.05.2019)

Reuters journalists Wa Lone and Kyaw Soe Oo are to receive the 2019 Pulitzer Prize for their “courageous coverage” of the murder of ten Rohingya Muslims in Myanmar. Both are serving a prison sentence for the reporting. (17.04.2019)