Reuters journalists Wa Lone and Kyaw Soe Oo are to receive the 2019 Pulitzer Prize for their “courageous coverage” of the murder of ten Rohingya Muslims in Myanmar. Both are serving a prison sentence for the reporting. 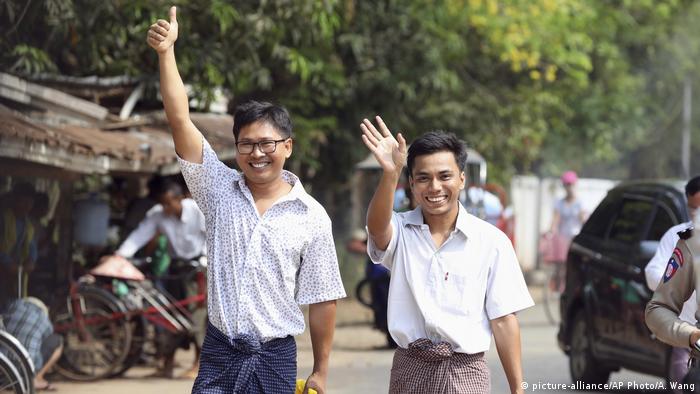 The Reuters staff reporters Wa Lone and Kyaw Soe Oo have been honored with the Pulitzer Prize for "expertly exposing the military units and Buddhist villagers responsible for the systematic expulsion and murder of Rohingya Muslims from Myanmar" and their "courageous coverage" that landed them in prison. Wa Lone, 33 and Kyaw Soe Oo, 29, both from Myanmar, were arrested in December 2017 and were later sentenced to seven years in prison for their reporting.

The two were framed by the police who planted military documents on them to then arrest them for collecting state secrets. Instead of dropping the charges when a policeman confirmed this setup, the court put him in jail. According to Reporters without Borders, “the prosecution case was based solely on this trumped-up evidence.”

Wa Lone and Kyaw Soe Oo are two of the journalists that have been named Person of the Year 2018 by Time Magazine. Moreover, the two Reuters journalists are to receive the 2019 UNESCO/Guillermo Cano Press Freedom Prize. They follow in the footsteps of a well-known predecessor: In 2018, Egyptian photojournalist Shawkan received the award.

Read the prize-winning report on the Rohingya massacre here.