Bangladeshi soldiers accused of raping 12-year-old Rohingya refugee girl | Asia| An in-depth look at news from across the continent | DW | 04.10.2019 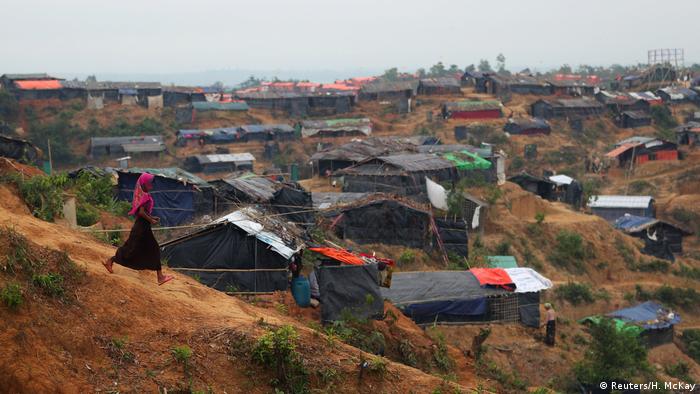 Recently, three Bangladeshi troops were accused of raping a 12-year-old girl at a Rohingya refugee camp in Cox's Bazar city. According to Mohammad Osman, the victim's elder brother, the incident took place on September 29, when the soldiers were patrolling the Nayapara refugee camp.

"Three soldiers forced their way into our house that evening. One of them held her mouth tightly, while the others raped her," Osman said.

Osman's neighbor told DW that the girl was taken to the nearby clinic as she was bleeding. Another Rohingya refugee, who saw the girl at the healthcare facility, said she was not able to walk properly.

The girl was later transferred to a main hospital in Cox's Bazar. Shaheen Abdur Rahman, the doctor who treated her, confirmed that the girl was brought to the hospital. He, however, refused to comment on rape allegations.

Osman claimed that her sister was discharged from the hospital without proper treatment.

"Medical examinations have confirmed that she was raped. But hospital authorities didn't issue a report to us even though we requested it," he said.

He said that security forces had threatened his family, hoping they would not report the case.

"I have been summoned to a nearby military camp a couple of times," he told DW on Friday, adding he was too afraid to go.

The family has not yet filed a police report, as it could have serious consequences for them, Osman said.

"Bangladesh's military is quite powerful and we are just refugees. We don't have any support in this country. That's why we are afraid of filing the rape case against the soldiers," he added.

"Her family should also get legal counseling and witness protection," Ganguly said.

"The Bangladesh military and other authorities should not try and protect criminals in their ranks. Those responsible should be prosecuted in a transparent and credible manner in civilian courts," the activist said.

Read more: Why does Asia have millions of stateless people?

Meanwhile, the officials that manage the Cox's Bazar Rohingya camp — the world's largest refugee settlement, where over a million Rohingya refugees have been living for years — said there was no evidence that the girl was raped.

"According to the medical examination, the girl was not raped," Mahbub Alam Talukder, the commissioner for the Refugee Relief and Repatriation Commission (RRRC) in Cox's Bazar, told DW.

Lieutenant Colonel Abdullah ibn Zaid, a spokesman for the Bangladesh Armed Forces, said they were looking into the alleged rape incident. "We have formed a committee to investigate the claim. If the soldiers are found guilty, we will punish them," Zaid told AFP news agency.

''We are aware of the [rape] reports. In such cases, individuals are entitled to medical, physical and psychological support, as well as access to due process. We cannot provide further details on individual cases due to confidentiality, the rights of the individual as well as the ongoing investigation," said UNHCR spokesperson Joseph Tripura.

The Bangladeshi army has been responsible for maintaining the security situation in the Cox's Bazar refugee camps.

The rape allegations surfaced at a time when tensions in the refugee camps were already on the rise due in part to a failed attempt to repatriate 3,500 of them.

The authorities have also blocked mobile phones and the internet in the camps, accusing some Rohingya refugees of committing violent crimes, including the murder of a local politician.

Rights activists have expressed grave concerns over the situation.

"For Bangladesh to uphold its human rights obligations, it needs to make sure that security forces do not act as judge, jury, and executioner — their role is to arrest suspects and produce evidence of their crime. That is true also in the case of any investigation of crimes in the refugee settlements," said HRW's Ganguly.