Rohingya support Bangladeshi leader′s proposal to end crisis | Asia | An in-depth look at news from across the continent | DW | 28.09.2019

A proposal by Bangladeshi Prime Minister Sheikh Hasina at the United Nations for resolving the Rohingya refugee crisis has been hailed by the Muslim community. Her earlier appeals have seemingly gone unheard, however. 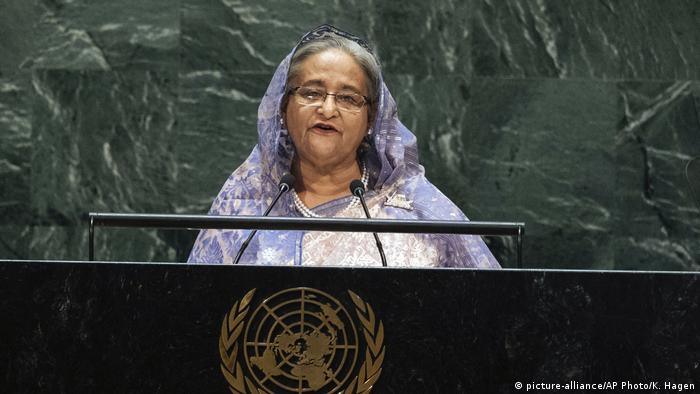 In Bangladesh's annual address to the UN General Assembly, Prime Minister Sheikh Hasina on Friday urged the international community to "understand the untenability of the situation" surrounding the Rohingya refugees from Myanmar, who are fleeing persecution by the military there.

More than 700,000 Rohingya fled what has been called an ethnic cleansing campaign involving mass rapes, killings and the burning of thousands of their homes in 2017. They have been living in overcrowded makeshift camps in the Bangladeshi coastal city of Cox's Bazar since then.

While the Muslim-majority country has provided shelter to the refugees, very little has been done by the international community to repatriate them to Myanmar. Meanwhile, tensions have been growing between the refugees and local communities, as many Bangladeshi citizens fear the Rohingya might not ever return to the country they came from.

At the General Assembly, Hasina presented a four-point plan to end the crisis, of which her country has borne the main burden despite not causing it. Her proposal includes the following points:

"I would request the international community to understand the untenability of the situation," Hasina said on Friday, adding: "The crisis is now going beyond the camps. Despite all our efforts to contain it, the crisis is now becoming a regional threat."

Rohingya activists around the world have hailed the plan by the Bangladeshi prime minister to resolve a mess that has continued now for more than two years. However, they fear that Myanmar might not accept the proposal, as it lacks any interest in taking back the refugees.

Nay san Lwin, a Germany-based Rohingya activist, feels that Hasina's proposal echoes the demands made by the Rohingya community for its safety in Rakhine state.

"To repatriate the Rohingya survivors to Myanmar, justice, international protection and full citizenship are very much required. Sheikh Hasina has included those in her proposal," he said.

However, the activist also pointed out that it's the third time Sheikh Hasina has made those proposals to the international community since the Rohingya exodus began in August 2017.

"The world leaders have listened to her proposals but never helped her by putting pressure on Myanmar to implement them," he said.

Tun Khin, president of the Burmese Rohingya Organisation UK, also expressed a similar opinion. He thinks that the international community has not been doing enough to pressure Myanmar to recognize the Rohingya as one of the country's legitimate ethnic communities.

“Although a million Rohingya have fled Myanmar over the past few years, nearly 600,000 still live in Rakhine state. They have been facing a serious risk of genocide," he said, adding: "The Myanmar government needs to build trust among the Rohingya community by providing citizenship and safety to those who are still in the country."

A recent report by UN investigators suggests that 600,000 Rohingya still inside Myanmar's Rakhine state remain in deteriorating and "deplorable" conditions.

"Myanmar continues to harbor genocidal intent, and the Rohingya remain under serious risk of genocide," the investigators said in their final report, which was presented to the UN Human Rights Council in Geneva on September 17, 2019.

The country is "denying wrongdoing, destroying evidence, refusing to conduct effective investigations and clearing, razing, confiscating and building on land from which it displaced Rohingya," the report stated.

Imran Mohammed, a former Rohingya leader, says that since Myanmar has caused the crisis, it bears the responsibility for bringing it to an end.

"Myanmar reacts as if the Rohingya crisis is not their problem. I strongly agree with Sheikh Hasina, who said at the UN that as the Buddhist-majority country has created this crisis, it has to solve it," he told DW.

"Rohingya have been kept away from the light of education and segregated from mainstream society by the Myanmar government. The community stuck in the cycle of violence for several decades," he said, adding: "Strong actions are needed by the international community to ensure a normal life for the minority community in the country."

Bangladesh’s prime minister spoke to the UN as her government plans to erect barbed-wire fencing around Rohingya camps to stop their expansion. Dhaka has been tightening the screws on the Rohingya refugees since a repatriation drive failed last month. Internet networks have been blocked in the camps, and some Rohingya refugees have been killed in alleged gunfights with security forces since then.

"There are three large camps. We'll fence them with barbed wire," the country's interior minister, Asaduzzaman Khan, said, adding: "Watchtowers and CCTV cameras will also be set up to monitor activity in the Cox's Bazar district settlements."

A rights activist, who asked to remain anonymous, condemned the planned move and said the fencing would "transform the camps into a big prison."

Tun Khin urged the Bangladeshi authorities to show some empathy with the Rohingya community as genocide victims.

"The Bangladeshi government should not restrict the refugees' freedom of movement and internet access. They have taken shelter there temporarily and will return to the country they belong to once their demand for safety and security are met," he said.