The Arakan Rohingya Salvation Army has declared a unilateral ceasefire starting Sunday. The militants attacked police posts in August, sparking a mass exodus of Rohinga Muslims. DW takes a look at the insurgents. 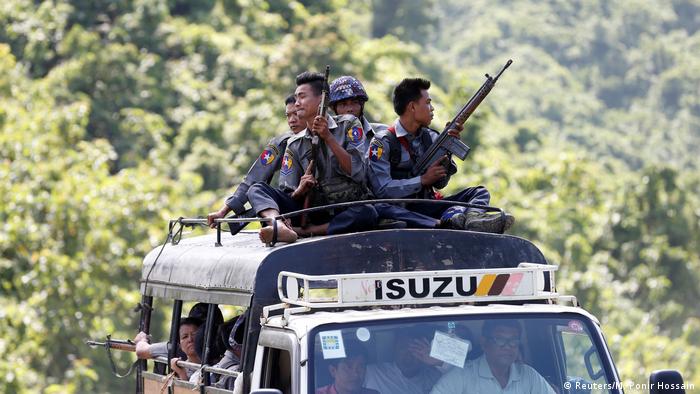 Who are the members of the Arakan Rohingya Salvation Army?

The Myanmar government calls them terrorists and accuses them of having links to terror groups in the Middle East.

They are known to use guerilla war tactics to mount attacks on security forces (seen above guarding a UN convoy), most recently on August 25, when 12 personnel were killed.

The insurgents, who on Saturday declared a unilateral ceasefire to begin one day later, are led by Pakistan-born Ata Ullah, also known as Abu Ammar, according to analysts and local people.

They operate in the state of Rakhine in western Myanmar, home to the majority of Rohingya Muslims. The region has seen some of the worst violence against the ethnic minority Rohingya people.

Read more: The Rohingya people in Myanmar: what you need to know?

How did the group come into existence?

The army started off as Harakah al-Yaqin, Arabic for "Faith Movement," which was formed after communal violence in 2012.

It rose to prominence in October 2016, when its members attacked border guard posts, killing nine policemen.

Experts say the group is a result of many years of persecution of the Rohingya people in Rakhine.

Rohingya have been denied citizenship rights and are viewed by the local authorities as illegal immigrants from Bangladesh. Myanmar's Buddhist majority is often accused of subjecting them to discrimination and violence.

Ata Ullah told Reuters news agency in March that resentment at their treatment had prompted hundreds of young Rohingya men to join him after he returned to Rakhine following several years in Saudi Arabia.

A report by the International Crisis Group (ICG) in December said the insurgent group, formed by Rohingya living in Saudi Arabia, had training and support links with international jihadists.

The Myanmar government claims the militants were trained in Bangladesh and Pakistan.

International jihadist groups such as the Taliban, the so-called "Islamic State" (IS) and al Qaeda in the Indian Subcontinent have often condemned atrocities committed against Rohingya and have issued calls for revenge on Myanmar and its Buddhists.

Are they well-equipped with weapons and funds?

The militants are poorly armed. They use homemade bombs and knives and sticks to carry out attacks. They are also known to use primitive weapons such as sword and spears.

ICG said the group appeared to be receiving funds from Rohingya expatriates and donors in Saudi Arabia and the Middle East.

It was unlikely to face financial difficulties in future, having established its legitimacy and capability to carry out attacks, ICG added.

Who is Ata Ullah – the alleged commander?

According to the ICG report, he was born in Karachi in Pakistan and grew up in Saudi Arabia. He is fluent in both Arabic and the Bengali dialect spoken in Rakhine.

ICG said he most likely went to Pakistan to get trained after disappearing from Saudi Arabia in 2012.

Ata Ullah is leading operations on the ground, along with a handful of other Rohingya trained in modern guerrilla tactics.

Rohingya refugees are seeking $150 billion in damages from US social media giant Facebook. Experts agree such lawsuits are important as a precedent — but what prospects do the Rohingya have of winning?

The country said "no one will be spared" in the hunt to find Mohibullah's killers. The police have made a number of arrests tied to the murder of the key Rohingya leader.