Kofi Annan report warns of Rakhine radicalization amid deadly Rohingya attacks | Asia | An in-depth look at news from across the continent | DW | 25.08.2017

An advisory commission tasked with finding solutions to the ethnic conflict in Myanmar's Rakhine state has warned of a further radicalization in the area. This comes as Muslim insurgents clash with security forces. 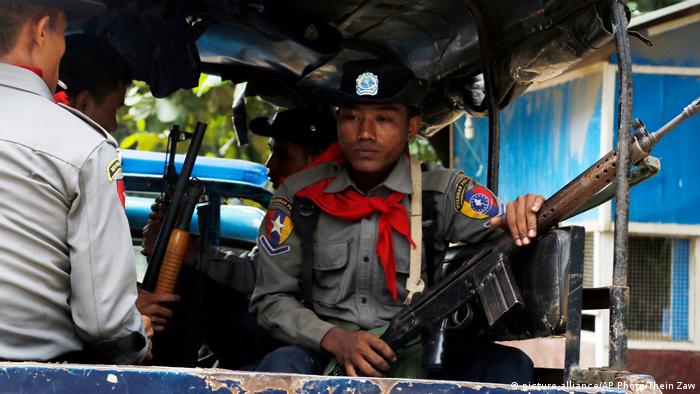 The Rakhine Advisory Commission released its 63-page report on Thursday, stating the Rakhine Muslim community, the Rohingya, had become vulnerable to human rights abuses due to a protracted conflict, statelessness and discrimination. The report also pointed out that about 10 percent of the world's stateless people live in Myanmar and that Rohingya make up the single largest stateless community in the world.

Myanmar's civilian government had tasked the commission with drawing up proposals on how it could foster reconciliation between different communities living in the restive state. The commission, headed by former UN Secretary-General Kofi Annan, comprised three foreign and six local experts.

A few hours after Annan presented the commission's report, violence broke out in the western Rakhine state when armed Muslim insurgents reportedly attacked security guards in the border region with Bangladesh. At least 71 people, including 12 security personnel, have been killed in these deadly clashes. According to the Southeast Asian country's authorities, the fighting continues in the area and the death toll is expected to rise.

The latest attack highlights the difficulty of the Annan-led commission's task to investigate the killings and violence in the state and recommend measures to resolve the protracted conflict.

In a speech following the Thursday attacks, Kofi Annan appealed to all parties to abstain from violence. "I strongly urge all communities and groups to reject violence. After years of insecurity and instability, it should be clear that violence is not the solution to the challenges facing Rakhine state," Annan said.

In October last year, shortly after the commission was established, a Muslim militia attacked several security checkpoints and killed scores of police officers. Myanmar's security forces responded by launching counterterrorism operations against insurgents. But human rights groups, such as Human Rights Watch and Amnesty International, said these operations involved arbitrary killings, systematic rapes, the burning of houses and forced expulsions of locals. According to the United Nations, around 87,000 members of the Muslim Rohingya minority have fled to Bangladesh following the crisis.

Viewed by the UN and the US as one of the world's most persecuted minorities, thousands of Rohingya from Myanmar and Bangladesh flee their homelands every year in a desperate attempt to reach neighboring countries.

A few days after the commission was convened last September, lawmakers in Rakhine demanded its dissolution. The Arakan National Party (ANP), which has 22 seats in the 47-strong regional parliament, and the Union Solidarity and Development Party (USDP), which was in power in the country until the 2015 elections, were behind the move.

Although it came to naught at the national level, the opposition to the commission was unequivocal at the regional level. Key political and civil society groups had boycotted Annan's team.

The commission was given a broad mandate to identify the most significant factors leading to violence, displacement and underdevelopment in Rakhine state. Despite opposition from some key players in the country, the commission members held talks with some 1,100 politicians, village leaders, monks, Muslim imams, businessmen and the internally displaced persons. The commission also met with high-level representatives from Bangladesh, Indonesia, China, Malaysia and Thailand.

In its report, the commission concluded that Rakhine was experiencing a threefold crisis related to development, human rights and security. Referring to the majority Arakanese Buddhist group and the minority Rohingya, the report says that if these challenges are not addressed immediately, there is a danger of further radicalization among both groups.

The biggest obstacle to peace in Rakhine, the commission notes, is the issue of citizenship. Almost all other issues are linked to citizenship - for instance, access to education and the right to vote and work.

"If this issue is not addressed, it will continue to cause significant human suffering and insecurity, while also holding back the economic and social development of the entire state," the report said.

Over a million Rohingya live in Rakhine. Their "stateless" status excludes them from political and social participation. The Arakanese people oppose citizenship for the Rohingya and see it as a threat, fearing they might lose influence in the state.

The commission called on Myanmar's government to "establish a clear strategy and timeline for the citizenship verification process." In addition, the authorities should clarify the status of those whose citizenship has not been accepted and clarify whether it meets the international standards, it urged.

The commission specifically recommends the revision of the 1982 citizens' rights law, because the classification of a citizen in it is complicated and often tied to ethnicity.

There has been no official reaction from the government to the commission's report.