Deportation looms large over Rohingyas in India | Asia | An in-depth look at news from across the continent | DW | 14.08.2017

The Indian government says it is working on a plan to deport thousands of Rohingya Muslims living in the country illegally. They are now being viewed as a security threat. Murali Krishnan reports. 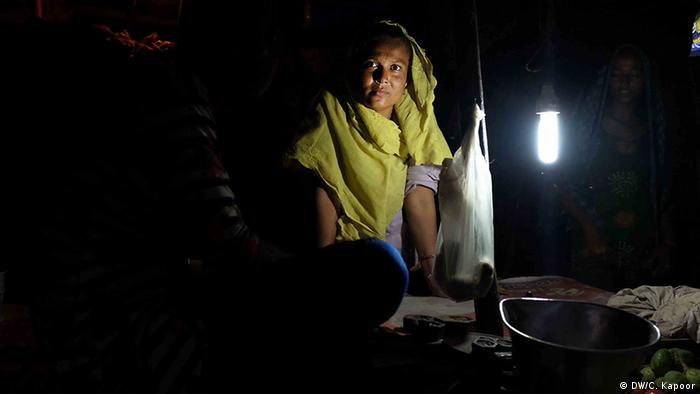 At the Rohingya camp in Kalindi Kunj, in eastern Delhi, 35-year-old Zahida Begum is worried. The frail-looking mother of four is uncertain about her future and that of her children as apprehension runs high with the Indian government directing state administrations to constitute task forces at district levels to identify and deport illegal immigrants including Rohingya.

Like Zahida, hundreds of others who live in squalid and cramped conditions in temporary structures in this desolate camp fear a second displacement and are dreading thoughts of fleeing again.

Before fleeing to India, these Rohingyas had endured brutal episodes of terror under the erstwhile military junta in Myanmar. Thousands of them are currently scattered among several states across India.

"I have been living here for over four years. Life has not been easy and we are now told that the India government could ask us to move out. Where should we go from here?" Zahida told DW.

Her neighbor Mohammed Haroon, 46, also left Myanmar four years back. His close family of 15 members, some siblings and some cousins, are living across camps in India, Bangladesh and even Canada.

Some 16,500 Rohingyas from Myanmar are registered with the United Nations High Commissioner for Refugees (UNHCR) in India. The UN agency issues ID cards to registered refugees and documents to asylum seekers which help prevent harassment, arbitrary arrests, detention and deportation.

The authorities also issue long-term visas to refugees, which eases their access to public services, bank accounts and employment in the private sector. Haroon was among those that received such help.

"But this climate of fear-mongering, portraying us as a security threat, has got all of us worried. We have to encounter more hardships," laments Haroon.

The fright and anxiety among an estimated 40,000 Rohingyas who are believed to be living in the country stems from statements issued by the government that many are living illegally in the country. India's home ministry has issued detailed instructions for their deportation, which is a continuous process.

"Some inputs indicate that around 40,000 Rohingyas are staying in India illegally and the Rohingyas are largely located in Jammu, Hyderabad, Haryana, Uttar Pradesh, Delhi and Rajasthan," said junior interior minister Kiren Rijiju in parliament recently.

In a communication sent to all states last week, the home ministry said the rise of terrorism in the last few decades had become a serious concern for most nations as illegal migrants are more vulnerable to getting recruited by terrorist organizations.

"These illegal immigrants not only infringe on the rights of Indian citizens but also pose grave security challenges,” said the communiqué.

Rightwing Hindutva groups have been protesting that the Rohingyas in Jammu could be a demographic threat in the region and that they could be susceptible to getting recruited by terror outfits. Officials estimate their number has doubled to nearly 11,000 in the last few years in Jammu alone where Hindus constitute a majority of the population.

The Rohingyas usually migrate to India from Myanmar through the rather porous India-Bangladesh border. From the time Myanmar's erstwhile military junta passed a controversial citizenship law in 1982, effectively denying citizenship rights to the Rohingyas, most of them have lived as stateless people.

The persecution and exodus of the Rohingya Muslim community is well documented but has remained in the periphery of global consciousness.

Following large-scale communal violence in 2012 between the Rohingyas and Myanmar's majority Buddhist population, many members of this community migrated to countries like Pakistan, Malaysia, Bangladesh, India and Indonesia.

In 2012, an estimated 140,000 people were internally displaced within Myanmar, and almost 86,000 made the hazardous journey into neighboring countries.

As they sought safety, they have been rejected everywhere and hundreds of thousands of Rohingyas are now living in limbo across South and Southeast Asia. Many have fled to India hoping that things would be better than back in Myanmar where they have been persecuted.

Human rights organizations have flayed the government's purported move to deport them.

"India is a member of the UN Human Rights Council. They (Rohingyas) have been the target of the most serious abuse ever chronicled. How can the government think of deporting them when they are not recognized in their own country? It is against all canons of international law," Meenakshi Ganguly of Human Rights Watch told DW.

Others like Ravi Hemadri of the Development and Justice Initiative (DAJI), an NGO, says the government's proposed move was a complete rollback of its age-old refugee policy.

"How can they be evicted and deported? The Tibetans, Sri Lankans, Burmese and Afghan refugees live here. Where is the evidence that the Rohingyas are a threat to the security fabric?" Hemadri told DW.

The UNHCR chose to be circumspect of the government's declaration.

Though India has a long tradition of accommodating refugees and asylum seekers from neighboring countries, it does not have a cohesive refugee policy and is not a signatory to the UN convention on refugees.

The Rohingyas, often referred to as the most persecuted minority in the world, continue to live in fear and face an uncertain future.