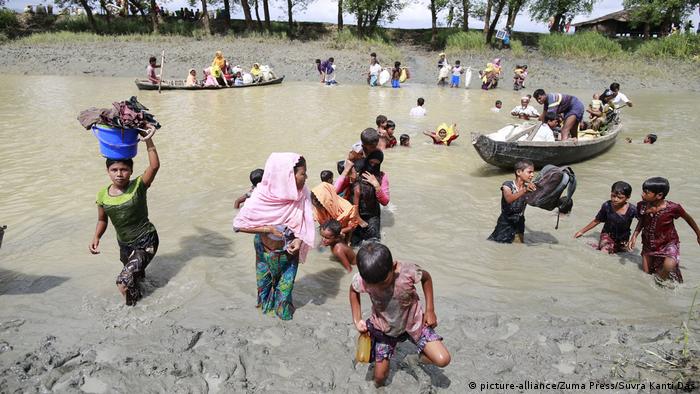 The plight of the Rohingya has cast a dark shadow over the image of Myanmar's de facto leader Aung San Suu Kyi, who has come under increasing fire over her perceived unwillingness to speak out against the treatment of the Rohingya or criticize the military.

Suu Kyi, a former political prisoner of Myanmar's junta and Nobel peace laureate, has made no public comment since the latest fighting broke out in Myanmar's western Rakhine state. This prompted criticism on Monday from fellow Nobel peace laureate Malala Yousafzai and Muslim countries in Asia targeting Suu Kyi.

"Every time I see the news, my heart breaks at the suffering of the Rohingya Muslims in Myanmar," Pakistani activist Yousafzai, who famously survived being shot in the head by the Taliban, said in a statement on Twitter.

"Over the last several years I have repeatedly condemned this tragic and shameful treatment. I am still waiting for my fellow Nobel laureate Aung San Suu Kyi to do the same," she added.

The growing crisis threatens Myanmar's diplomatic relations, particularly with Muslim-majority countries in Southeast Asia where there is profound public anger over the treatment of the Rohingya.

Indonesia's Foreign Minister Retno Marsudi met Suu Kyi as well as Myanmar's army chief General Min Aung Hlaing in Naypyidaw on Monday in a bid to pressure the government to do more to alleviate the crisis. "Once again, violence, this humanitarian crisis has to stop immediately," Indonesian President Joko Widodo told reporters on Sunday as he announced Retno's mission there.

Pakistan's Foreign Ministry released a statement saying it was "deeply concerned over reports of growing number of deaths and forced displacement of Rohingya Muslims" and urged Myanmar to investigate reports of atrocities against the community.

Muslim-majority Malaysia has also seen public protests since the latest round of Rakhine violence began. "We urge for calm and restraint," Prime Minister Najib Razak tweeted. "The dire situation facing our Rohingya brothers and sisters must be alleviated for good of Myanmar and region."

More than 87,000 Rohingya Muslims have fled west toward Bangladesh following the worst wave of violence in Rakhine since communal conflict broke out in the region in 2012. The Myanmar army has been accused of launching a violent campaign since August 25, when Rohingya insurgents killed 12 police.

"Many of the refugees who have poured across the border into Bangladesh have spoken of witnessing horrific abuses by Myanmar's security forces, including killings and burnings of whole villages," Amnesty International's Asia spokesperson Olof Blomqvist told DW.

Desperate for safety in neighboring Bangladesh, thousands of people have already crossed the porous land border made up of muddy rice fields. This number surpasses the total number of Rohingya who had escaped Myanmar following a smaller insurgent attack last October.

The latest estimate, according to the United Nations aid workers on the ground, suggests a total of nearly 150,000 Rohingya have taken shelter in Bangladesh's southern district of Cox's Bazar since last year alone.

The makeshift camps set up at the time are being expanded but the International Organization for Migration warns aid agencies "are now struggling to cope with the influx of new arrivals."

Bangladesh is already host to more than 400,000 Rohingya, who have fled persecution in Myanmar since the early 1990s. Unable to cope with the recent exodus, Bangladesh, which has grown increasingly hostile toward the Rohingya, has been forcibly pushing thousands of people back into violence-wrought Myanmar.

Local media in Bangladesh reported on Monday over 2,000 Rohingya were arrested on one of the country's southern islands and deported back to Myanmar in trawlers. Thousands more wait in no man's land for a chance to cross.

"Bangladeshi authorities have maintained their longstanding policy of sealing the border with Myanmar," Amnesty's Blomqvist told DW. "This is forcing refugees to take dangerous and irregular routes to enter Bangladesh, which could have deadly consequences."

Last week, dozens of Rohingya people drowned while crossing the Naf River that separates the two countries, with bodies of mostly women and children washing up on the Bangladeshi shoreline.

"It's clear that the violence [in Myanmar] is very serious," Anagha Neelakantan from International Crisis Group (ICG) told DW. She joins other international rights groups in urging the Myanmar government to allow humanitarian and media access in Rakhine, the country's poorest state.

"The government will and should be judged based on its actions in the coming weeks," Neelakantan added.

The response of Myanmar's security forces to last year's attack by insurgents is still being investigated. Blomqvist said, "The abuses we documented then - killings, torture, rape, burning of homes - may have amounted to crimes against humanity. This must not happen again."

The 1.1 million Rohingya are a Muslim minority not recognized by the Buddhist-majority Myanmar. Considered to be illegal immigrants from Bangladesh, the Rohingya are denied citizenship and rights in Myanmar, despite them claiming centuries-old roots in Rakhine.

Bangladesh, however, equally has a long history of rejecting the Rohingya.

"Bangladesh has refused to register newly arrived Rohingya as refugees for decades," Blomqvist explains, "a policy that is keeping tens of thousands of people in Bangladesh in a state of limbo."

Without legal rights, he says, the Rohingya struggle to find employment and are vulnerable to abuse by criminal gangs.

Formed last year by young Rohingya exiles in Saudi Arabia, the small insurgent group now calling itself the Arakan Rohingya Salvation Army (ARSA) is the cause of the recent bout of conflict in western Myanmar.

Analysts blame Myanmar's government for the conditions that led to the group's creation. But despite militant training from Pakistan, and possibly Afghanistan, and funding from the diaspora and donors in Saudi Arabia, ICG's Neelakantan believes, "there is no evidence so far that the militant group supports a transnational jihadi agenda."

Posting statements on Twitter, ARSA has described itself as "the guardians and protectors of the oppressed Rohingya," claiming they were waging "a defensive war with the brutal Burmese military regime."

With recent reports of some Rohingya men in Bangladesh sneaking across the border to join the insurgents fighting in Rakhine, Neelakantan warns, "The [Myanmar] military and government should be careful not to assume all Rohingya are sympathizers or supporters [of jihadis]." She adds, "The attacks and violence make it clear that the group's actions are harming, not helping the Rohingya communities."