Does Myanmar soldiers′ murder confession prove Rohingya genocide? | Asia | An in-depth look at news from across the continent | DW | 15.09.2020

Two soldiers have confessed to killing dozens of Rohingya in a video released by activists. It could be a game-changer in an ongoing international genocide investigation, human rights experts say. 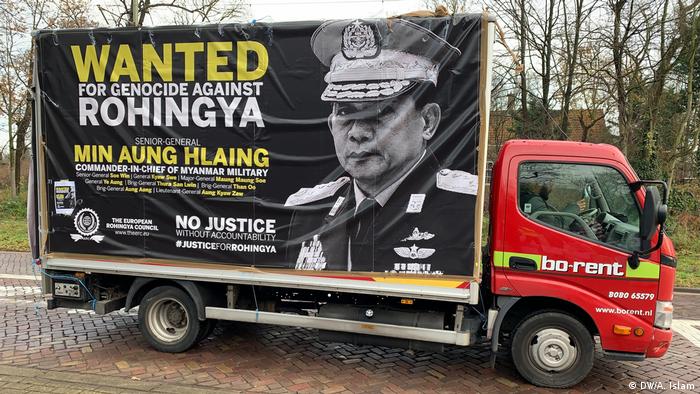 Two Myanmar soldiers are currently believed to be in custody at the International Criminal Court (ICC) in The Hague, two months after they confessed on video to "exterminating" minority Rohingya Muslims in Myanmar's Rakhine state.

In July, the two admitted on camera to being involved in the killings of around 180 civilians during military operations in 2017, which forced some 750,000 Rohingya to flee to Bangladesh.

Myo Win Tun, 33, said he was ordered to "shoot all that you see and hear," adding that he committed rape during the operations.

Zaw Naing Tun, 30, said he stood guard while his senior officers raped Rohingya women. They gave the names and ranks of 17 other soldiers who they say committed atrocities, including six senior commanders who ordered them to "exterminate" all Rohingya.

The videos were filmed by the Arakan Army (AA), a Rakhine rebel group fighting the Myanmar military, and released by the NGO Fortify Rights, which claims it has analyzed the footage and found it to be credible.

The videos provide the most detailed account so far directly from the alleged perpetrators of what the UN has called a "textbook case of genocide." DW was able to verify the content of the video in cooperation with Rohingya activists.

Widespread atrocities committed against the Muslim-minority Rohingya living in the Myanmar's northwest have been documented by UN investigators and rights groups.

The ICC is currently investigating whether leaders of Myanmar's military, the Tatmadaw, committed crimes against the Rohingya.

It is unclear how the ICC will respond to the apparent confession in the videos. In a statement sent to DW, the ICC said it would not comment on an ongoing investigation.

The two men have not been officially charged with any crime.

How did the two men reach The Hague?

Myo Win Tun and Zaw Naing Tun appeared at the Myanmar-Bangladesh border in August after leaving their military posts, according to media reports.

It's not clear from the reports how the men fell into the AA's hands, why they were speaking, or how they were transported to the Netherlands and under whose authority.

"Upon their arrival in Bangladesh, the government in Dhaka contacted the ICC, and we can surmise that the ICC traveled to Bangladesh and transported the men to The Hague," Matthew Smith, chief executive officer of Fortify Rights, told DW.

"They certainly aren't tourists in The Netherlands," he added.

Payam Akhavan, a Canadian lawyer representing Bangladesh at the ICC, confirmed to DW that the two men had appeared at a border post requesting the protection of the Bangladeshi government and had confessed to the mass-murder and rape of Rohingya civilians in 2017.

However, he couldn't confirm that Bangladesh had handed the soldiers over to the ICC.

"All I can say is that those two individuals are no longer in Bangladesh," Akhavan said.

The Bangladeshi Foreign Ministry did not want to respond to a request from DW asking about how the men reached The Hague.

Myanmar's military spokesman, Brigadier General Zaw Min Tun, confirmed last week that the men were former soldiers, but claimed they had been "taken hostage" by the AA rebel group and "threatened and coerced into confessing."

However, the AA dismissed these claims and said the two soldiers had deserted.

"They voluntarily confessed about the war crimes committed by Myanmar's military," AA spokesman Khine Thu Kha said, adding other defectors had given similar testimonies, which they have posted online in recent months.

A 'monumental' moment for justice?

Fortify Rights is calling for the men to be prosecuted at the ICC, calling their confession a "monumental moment" in the Rohingya's ongoing struggle for justice.

"These men have information that can help bring down senior commanders of the Myanmar army who are responsible for heinous crimes, not to mention that these two men themselves should face justice for their crimes," Smith said.

"Many Rohingya victims are available to testify about the crimes committed by Myanmar, but as the country is not going to cooperate with the ICC, no one is there to confess from the perpetrators' side," he said.

"These two soldiers will make a difference. Their statements will be very helpful for the ongoing investigation," Lwin added.

"Their move will encourage the remaining soldiers in Rakhine state to take a step and confess their crime."

The Arakan Rohingya Society for Peace and Human Rights congratulated the soldiers for "coming forward and beginning to repair the relationship between Rohingya and Burmese people in Rakhine state."

Read more: In Rohingya refugee camps, coronavirus is under control — for now

What is the current legal situation?

Myanmar is facing two separate lawsuits, one at the ICC and another at the International Court of Justice (ICJ), for a 2017 military campaign that drove many Rohingya across the border into Bangladesh.

Meanwhile, Canada and The Netherlands announced earlier this month their intentions to formally join The Gambia's genocide case against Myanmar at the ICJ.

Canadian Foreign Minister Francois-Philippe Champagne, and his Dutch counterpart Stef Blok, have said in a joint statement the two nations were acting on obligations under the Genocide Convention "to prevent the crime of genocide and hold those responsible to account."

"This is a great development. Both countries are setting an important example of how governments can stand on the right side of history," said Smith, adding that more countries should follow.

"For years, people told Rohingya and us that it would be impossible to get perpetrators to The Hague, and now it has happened," he said. "We won't quit until these atrocities end."

Lwin from the Free Rohingya Coalition called on more countries to support The Gambia's lawsuit.

He pointed out that out of more than 150 countries who are parties to the Genocide Convention, only Canada and The Netherlands have so far shown their solidarity with The Gambia.

"Many others can join these three countries. The world must unite against genocide, instead of just saying 'we support justice,'" he said.