In Rohingya refugee camps, coronavirus is under control — for now | Asia| An in-depth look at news from across the continent | DW | 19.06.2020

The coronavirus pandemic reached Bangladesh's Rohingya refugee camps a month ago, raising alarm it could spiral out of control. While the situation is under control — at least for now — refugees need continued support. 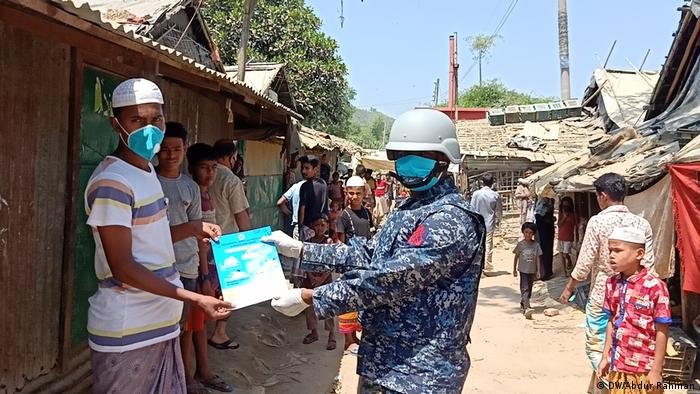 Mohammad Alam and his eight-member family live in Teknaf refugee camp, not far from the city of Cox's Bazar. Since the coronavirus outbreak, they have tried to stay at home as much as possible. "We also try to maintain social distance. But our camp is overcrowded. It is very difficult to keep distance when you go outside," Alam told DW.

Around 800,000 Rohingya refugees are facing a similar situation in two refugee camps — Teknaf and Kutupalong — which were set up in Bangladesh in 2017 after hundreds of thousands of Rohingya fled ethnic violence in Myanmar.

The camps are overcrowded and lack many basic facilities, such as clean drinking water and sanitary facilities. According to Felix Heiduk and Antje Missbach of the German Institute for International and Security Affairs (Stiftung Wissenschaft und Politik — SWP), the living conditions in the camps have deteriorated after the COVID-19 outbreak.

Since April, the Bangladeshi government has restricted the number of aid workers in the camps — apparently to prevent the virus from spreading to other parts of the city.

More cases outside the camps

Despite these problems, the coronavirus has not wreaked havoc in the refugee camps. As of Wednesday, there were a total of 38 confirmed COVID-19 cases and two related deaths.

The number of cases is significantly higher in the town of Cox's Bazar As of Wednesday, the authorities have reported more than 1,600 COVID-19 infections in Cox's Bazar, prompting Dhaka to declare the city a high-risk area.

Ram Das, vice director of the Care aid organization in Bangladesh, recently told a press conference that only through a joint effort by the Bangladeshi government and international organizations can the virus be controlled in the camps. "The situation is dire across the country, but the virus cases in the camps are still limited. It's a great achievement," Das said.

When the first case in Kutupalong was confirmed over a month ago, an isolation center was built quickly and the camp was provided with testing kits and trained health workers. Since then, more isolation centers for COVID-19 patients have been set up there. Care organization alone has set up four such centers, each with 20 to 25 beds.

According to Das, an extensive awareness campaign about COVID-19 was launched in the camps. Health experts go door-to-door to tell people about the coronavirus symptoms and how to protect from the virus.

However, the internet is a double-edged sword. It helps spread rumors and false reports, while enabling criminals and extremists to promote their machinations and propaganda in the camps. The internet is also necessary in getting the message across of awareness campaigns to NGOs and aid workers.

The Bangladeshi government has decided that the risk outweighs the benefits and has blocked internet access in the camps since last September.

The internet blackout isn't total, Ram Das said, and shaky access is available here and there. He thinks it would be a better idea to get the camps totally online.

"Fast and uncomplicated flow of information is very important for humanitarian aid," he said.

Syed Alam, a 38-year-old man living in camp 20, said he wants better internet access in the camp, as he is always looking for information about COVID-19.

"People are afraid that the security personnel will take the sick out of the camp and put them in isolation," he told DW, adding that rumors abound about sick people who are taken away from the camp against their will to an unknown location.

"Some people avoid the aid stations, even when they are sick, because they are afraid," said Alam.

The SWP study also confirms that these kinds of rumors are spreading in the camps, along with a corresponding reduction of sick people reporting to medical aid stations.

"There is growing fear among the residents of the camps that the virus will spread like wildfire and lead to another 'massacre' of the Rohingya."

This could also lead to the danger of more Rohingya seeking to flee by taking to the sea like in 2015 when an estimated 30,000 Rohingya tried to flee Myanmar and Bangladesh by boat resulting in hundreds of deaths.

Das said that although many refugees are worried, there are no signs of panic. However, the apparent success in keeping the virus away should not hide the fact that the risk of a COVID-19 outbreak in the camps remains very high. And all of the preventative measures cannot fully alleviative the very difficult conditions continually present in the camps.

The monsoon season is here, and soon cyclones will begin flanking the coast of southern Bangladesh. Heavy rain, mudslides and storms present big challenges along with COVID-19.

International aid is critical to keeping the situation in the camps relatively stable. But the money that's been promised may not be enough.