Bangladesh: Coronavirus reaches largest refugee camp in the world | Asia | An in-depth look at news from across the continent | DW | 15.05.2020 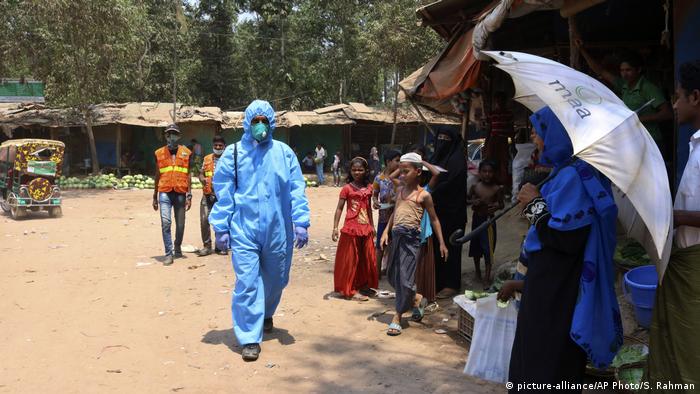 Since the beginning of the COVID-19 pandemic, international aid organizations have been warning that an outbreak in the world's refugee camps could have catastrophic consequences.

To prevent such a scenario, Bangladesh has largely sealed off the Kutupalong refugee camp in Cox's Bazar – inhabited mostly by the Rohingya people who fled from ethnic and religious persecution in neighboring Myanmar – since the start of April 2020.

People are allowed to move in and out of the camp only if it's strictly necessary. Police have set up roadblocks and patrols to enforce the restrictions on public movement.

In recent weeks, aid organizations such as the International Rescue Committee (IRC) and CARE Germany have been preparing for an outbreak as best as they could. Medical personnel have been trained and isolation centers have been set up. According to IRC, a camp with 1,700 beds is planned, and several hundred beds are already operational. There is an intensive care unit with ten ventilators.

A few days ago, a refugee residing in the camp became sick. He went to the nearest health center, where a doctor suspected COVID-19 because of his symptoms.

A test was conducted and the results were sent to a laboratory, which confirmed on Thursday that the patient contracted the disease.

"The infected Rohingya person is being treated in isolation at a Doctors Without Border (MSF) hospital in Cox's Bazar," Mohammad Mahfuzar Rahman, an official working for the Refugee, Relief and Repatriation Commissioner (RRRC) and in charge of the Ukhiya Kutupalong camp, told DW. "Six members of his family have been kept in quarantine separately. Their samples will be collected later and sent to the local medical college lab for testing," he added.

Since the detection of the first case, the Bangladeshi government and several aid organizations have been striving to identify the chain of transmission, IRC told DW. But the process is still ongoing.

As a result of the confirmed case, more than 855,000 refugees and asylum-seekers in the camp and over 440,000 residents living in the immediate vicinity of the overcrowded camp now face the threat of being infected with the virus.

Outside the camp, there have already been COVID-19 cases, but the government says they are under control.

Despite all the efforts, additional resources would be needed to prevent a catastrophe, Manish Agrawal, Bangladesh country director at the IRC, told DW. "Health facilities are already crowded and overwhelmed, without the sufficient equipment, health staff or physical space necessary to treat cases."

Even before the outbreak of COVID-19, sanitary facilities in the camp were already inadequate, with many families sharing toilets and often long lines building up at access points to drinking water and washrooms. It is impossible to maintain physical distancing in the cramped accommodation. Under such conditions, rapid transmission of the virus is inevitable.

"Here, there are 40,000 to 70,000 people living per square kilometer. That's at least 1.6 times the population density on board the Diamond Princess cruise ship, where the disease spread four times as fast than in China's Wuhan province at the peak of the outbreak," said Agrawal.

Despite various campaigns, Agrawal sees a lack of awareness among the camp's residents. Experts say internet restrictions imposed by the government to curb the spread of rumors and false information have contributed to the problem.

"Internet and mobile phone restrictions in the camp have led to a lack of sufficient and accurate information about the virus and how to protect oneself from the disease. These restrictions also impact the ability of agencies to respond swiftly in case of a reported case in the camps," Agrawal said.

It's unclear whether all of the camp residents are aware of the first confirmed case there.