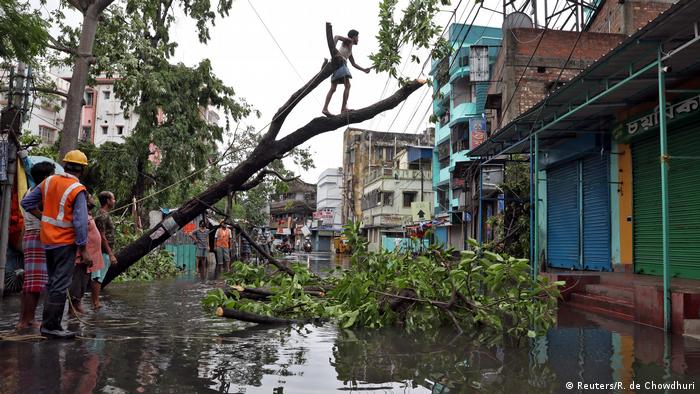 Authorities in eastern India and neighboring Bangladesh on Friday began surveying the damage from Cyclone Amphan.

Indian Prime Minister Narendra Modi flew over hard-hit areas in the state of West Bengal before visiting the city of Kolkata, which suffered extensive flooding.

"The country is already going through a crisis and during that time we have to deal with a cyclone,'' Modi said, while announcing 10 billion rupees ($130 million; €119 million ) in emergency aid for the storm-battered state. "Despite this, West Bengal is fighting well. We are all with West Bengal in these adverse times."

It was Modi's first trip outside the capital, New Delhi, since a coronavirus lockdown was imposed in March. 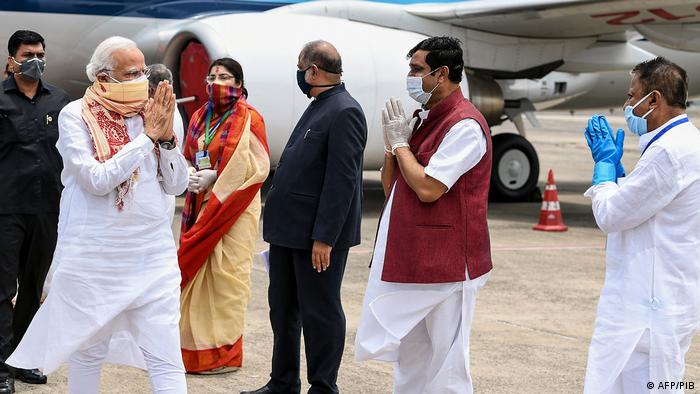 Modi visited Kolkata to inspect the damage for himself

Kolkata's deputy mayor, Atin Ghosh, said the city of 14 million was in "a state of shock."

"Municipal teams, civil defense personnel, police personnel have been working overtime to restore road connectivity first. But there is an acute shortage of manpower due to coronavirus-related restrictions," Ghosh told Reuters.

There were also concerns about the coronavirus spreading in overcrowded emergency shelters, where millions of people who have lost their homes are being housed.

Amphan was the most powerful storm to strike West Bengal and Bangladesh in more than a decade. The cyclone killed at least 95 people and displaced millions after it made landfall on Wednesday, bringing with it a dangerous storm surge and heavy rain. It also destroyed homes and crops, submerged vast areas of land and snapped power lines in both countries.

Officials in Bangladesh said the cyclone had caused about $130 million in damage. The full extent of the destruction along India's eastern coastal region was still unclear, with reports still trickling in from remote areas.

Super cyclone Amphan has left more than 80 people dead and millions more evacuated or without electricity. "The situation is more worrying than the coronavirus pandemic," an Indian official said. (21.05.2020)

Cyclone Amphan is threatening to be one of the most dangerous to hit the two countries in years. Climate change has led to an increasing number of powerful storms hitting their coasts. (19.05.2020)

As the strongest cyclone to strike the Bay of Bengal in 20 years makes landfall, Bangladesh's coronavirus restrictions and poor disaster preparedness threaten catastrophe in an already impoverished area. (20.05.2020)