Coronavirus: Economy down, poverty up in Bangladesh

The global health crisis caused by COVID-19 has hit Bangladesh's economy hard and jeopardized the country's impressive achievements in poverty reduction. Against this backdrop, Dhaka is set to announce its annual budget. 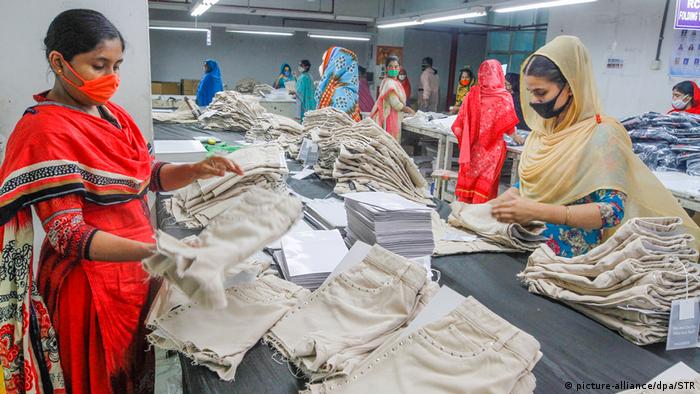 But, since mid-March, Hossain has had no work and no money to feed his wife and two children. "Coronavirus has spread here like anything. People are scared and don't call me for any work," Hossain told DW. Hossain lives in Cumilla, a district that lies about 100 kilometers (62.1 miles) to the southeast of the capital Dhaka and is one of the regions hit hard by the massive health crisis caused by the novel coronavirus.

Bangladesh has so far recorded 71,675 COVID-19 cases, with the disease claiming 975 lives until now.
A recent study conducted by a group of local NGOs concluded that every three out of five people in the country are at high risk of facing economic and health vulnerabilities. "Those people who are losing their jobs are from the bottom of the pyramid," said KAM Morshed, an expert working for the local NGO BRAC.

According to the study, among the 100.22 million people at high risk of economic and health vulnerabilities, 53.64 million are extremely poor. These people earn less than 160 Taka (€1.7, $1.9) a day. "In a more recent study conducted until May 26, more than half of these extreme poor people told that they have run out of money," Morshed told DW.

Due to a severe constriction of economic activity as a result of the COVID-19 pandemic, more and more people like Hossain are going down the extreme poverty lane.

According to the South Asian Network on Economic Modeling (SANEM), Bangladesh's poverty rate may double to 40.9% from that prior to the onset of the pandemic. Morshed said, "The poor and vulnerable people are becoming more vulnerable. So we expect the inequality in society to increase."

People like Hossain are also part of the informal sector, which accounts for almost 80-90% of the jobs in Bangladesh. The pandemic has hurt them the most. Between March and May, the average family income subsided by as much as 74%.

"If these people come out of their homes out of hunger, there is no scope for physical distancing and hygiene maintenance," former lead economist of the World Bank's Bangladesh office Zahid Hussain told DW.

Another study on national food security by BRAC revealed that during the 45-day lockdown period between March and May, the country's farmers faced a loss worth 565.36 billion taka (€5.9 billion, $6.66 billion).

"The World Food Program has said that even if the world produces surplus food this year, due to the disruption in trade and distribution, many countries are at risk of famine," Hussain said.

Bangladesh's manufacturing sector has also suffered a huge blow, especially the ready-made garments sector, which accounts for around 80% of the country's total export earnings. At least 4 million workers depend on the textile industry for their livelihood.

After the pandemic hit Europe and the US, the industry experienced a reduction in exports of as much as 84% in April 2020 compared with that of the previous year. More than 1,000 factories have been closed and 2.19 million workers lost their jobs, according to the NGO study.

Read more: Attacked and harassed — How Bangladeshi journalists are paying the price for COVID-19 reporting

Recently, the president of the Bangladesh garment exporters' association (BGMEA), Rubana Huq told the press that reopened garment factories are running at only 55% capacity because of canceled orders from the buyers. She said that this might result in more job losses in the sector. "The buyers are not interested in taking responsibility. Even we rarely get them to hold meetings online," she told local media.

The pandemic has also hit the other main source of Bangladesh's external earnings: remittances. In March, they dropped by 12% and in April by 25%. Estimates suggest that over 1.4 million migrant workers have either returned or are on their way back home due to job losses.

The World Bank estimates that, overall, inward remittances might fall by around 22% in 2020 due to the pandemic.

Against this backdrop, the Bangladeshi government is set to announce its annual budget on Thursday, which experts call a "budget of survival."

Although government officials are concerned about statistics like budget deficit, national debt and GDP growth, observers say the focus should be on different metrics this time round.

"We have to come out of this growth obsession. This is totally irrelevant to the current situation," World Bank's former economist Hussain said. "The most important aspect is survival: survival of the people and institutions."

Expecting a drop in economic growth in the coming months and to fight the downturn, Bangladeshi officials appear to want to maintain government spending at the current level.

According to officials, Bangladesh might announce a budget of approximately 5,569 billion taka (€58.11 billion, $65.64 billion), which is higher than that of the previous year.

"Our income is declining. Revenues, export and tax income, everything is going down. But still we have not reduced the expenditure," Bangladesh's Planning Minister Muhammad Abdul Mannan told DW. "We are depending largely on local and foreign loans." Mannan stressed that the current global economic situation remains uncertain and the true extent of the damage caused by the coronavirus is still unclear.

"There are lump sums allocated for tackling the emergency. We need to urgently address the inadequacies in the health sector," he added.

Experts say the focus of the government's budget, not just this year but also in the coming two years, should be on helping the poor cope with the aftereffects of the coronavirus crisis.

"The two sectors the government should give the most priority to are health and social security. The social safety net should be broadened. Small businesses and poor people should reap the benefits of the budget," Hussain told DW.

Mannan, however, admitted that there are lots of constraints when it comes to speeding up implementation of government projects, particularly in areas like healthcare.

"First of all, we don't have unlimited money and secondly, even if we allocate more than what we are now doing, we don't have the strength of implementation."

Experts underline that if the current economic distress is not handled properly, the rise in inequality between the rich and the poor might create long term socio-economic damage within Bangladeshi society.

The coronavirus will lead to a famine of "biblical proportions" unless aid can reach those in dire need immediately, warns the UN agency. But the pandemic is only amplifying famine's causes, which also need tackling. (23.04.2020)