Attacked and harassed — How Bangladeshi journalists are paying the price for COVID-19 reporting | Asia | An in-depth look at news from across the continent | DW | 04.05.2020

Rights groups say that PM Sheikh Hasina's government is trying to conceal information about COVID-19. Experts say the public health crisis in Bangladesh is far worse than what the authorities are projecting. 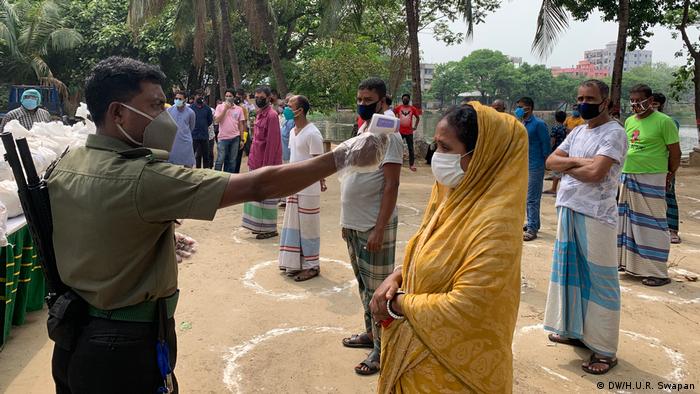 Sajal Bhuiyan, a journalist based in Narsingdi district, was working on a report about the rice crisis in Bangladesh amid the coronavirus pandemic. He told DW that he visited Nasir Uddin Khan, a sub-district administrator, to ask him questions about the alleged misappropriation of rice that was earmarked for people affected by the virus. His previous report on the issue, which was aired on a private TV channel, had already angered local politicians.

Bhuiyan said that when he entered Khan's office on April 23, the official and his supporters started beating him. "They roughed me up until I fell unconscious," said the journalist, who is currently being treated in a hospital in Dhaka. Bhuiyan accused the official of trying to stop people from taking him to hospital.

Doctors said he suffered injuries to his head and eyes, and was transferred to the Dhaka Medical College. "One of my eyes has lost sight due to the injury. Other injuries require a long treatment," the journalist told DW.

Bhuiyan has not received any financial support for his treatment from his news channel. No local journalist association has expressed support for him, he said. He has filed a case against his attackers.

"Khan has support in the ruling Awami League party. I want justice, I want to see Khan behind bars."

According to the Paris-based Reporters Without Borders (RSF) media watchdog, 15 journalists have been attacked in Bangladesh in the past few weeks for their reporting on COVID-19 issues. Some journalists living abroad say they have also been pressured by Bangladeshi authorities over their critical reporting of the government's COVID-19 response.

Tasneem Khalil, a Bangladeshi-Swedish journalist, said that three members of a Bangladeshi intelligence wing questioned his mother about his work in Sylhet district. He thinks it was an attempt by the officials to stop him from critical reporting.

"This kind of harassment is deplorable and unacceptable. The Bangladeshi government must stop it and make sure that my mother receives protection," said Khalil, who is the editor of the Netra News newspaper.

Bangladesh, a Muslim-majority country of over 165 million people, has so far registered more than 10,000 COVID-19 cases and over 180 related deaths. But experts believe the number of infections could be much higher as the pace of testing has been quite slow.

Dhaka's measures to contain the spread of the novel coronavirus have come under sharp criticism in the past few weeks, with critics describing them as inadequate.

Prime Minister Sheikh Hasina's government has been accused of muzzling the press and trying to prevent journalists from informing the public about the severity of the coronavirus pandemic in the country.

"There is no doubt that the government is trying to control information; it wants to conceal information about the misappropriation of relief materials and a lack of preparedness to deal with the health crisis," Ali Riaz, Distinguished Professor of political science at Illinois State University, told DW.

"The restrictions on healthcare workers regarding their engagement with the media and punitive actions against doctors are part of a strategy," Riaz said.

But Manjurul Ahsan Bulbul, former president of the Bangladesh Federal Union of Journalists (BFUJ), believes the recent attacks on journalists are related to reporting about corruption and not to the coverage of the coronavirus crisis.

Bangladeshi authorities often slam critical reporting as "fake news." Rights groups say the South Asian country's Digital Security Act, which was enacted to stop fake news and disinformation, has often been used as a tool to muzzle critical voices in the country.

"We have called on the Bangladeshi government to amend the act immediately in compliance with international human rights laws, including the International Covenant on Civil and Political Rights," Saad Hammadi, a South Asia campaigner for Amnesty international, told DW.

"Media professionals must tell the government how this act has violated people's rights and call for its amendment," he added.

Riaz says that Bangladesh is experiencing an "incremental erosion of democracy" under the ruling Awami League party.

"The ruling party wants to muffle all critical voices. However, journalists should bear some responsibility too. They stand divided and some media owners collude with the government," he said.